Researchers know the Megalodon was about three times larger than a great white shark, but they still have a lot to learn about this gigantic predator. 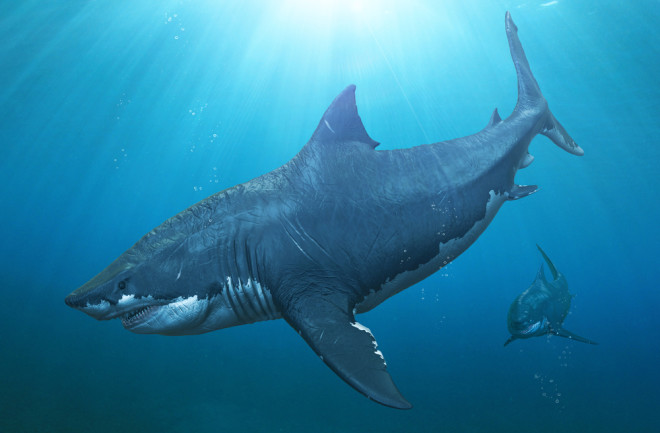 The Megalodon ruled the oceans for nearly 15 million years before going extinct 3.6 million years ago. At around three times the size of the great white shark (Carcharodon carcharias), it was the largest shark the world had ever seen. Scientists are not exactly sure how it looked because most of the fossils are teeth, but they do know that its jaw was wide enough to gulp down a human whole. A shark attack from a Megalodon would have meant almost certain death.

“Unlike the shark attacks of today that many humans survive, the sheer size and strength of a test bite from Megalodon would have been impossible to survive,” says Daniel Sigman, professor of geological and geophysical sciences at Princeton University. Even though this shark terrified other creatures millions of years ago with its massive chomp, it still fascinates scientists and people alike today.

One of Many Predators

When the Megalodon swam the oceans, it was at the top of the food chain with many more predators than our oceans have today. It likely noshed on full-sized toothed whales and other predatory sharks. Not only was it bigger than great white sharks, according to Sigman, it also swam much faster, swooping through the ocean with such vigor that if its prey swam in its path, its chance of survival was nil.

The ocean was about 4 to 5 degrees Fahrenheit warmer than today and it was also much more fruitful, loaded with enough prey to feed a giant Megalodon. “Ocean conditions at the time allowed for a longer food chain,” says Sigman.

Research shows that the Megalodon likely had regional endothermy, meaning like sharks today, it had some ability to regulate and warm up its body temperature in colder waters. As a result, the Megalodon took advantage of its apex predator position and thrived all over the globe. Scientists have found its fossils in most of the ocean waters except for the poles. The species was generally smaller in the tropics compared to those found in cooler waters, which might have had something to do with more food availability, says Sigman.

“Its teeth are commonly found in rocks that formed in shallow, nearshore environments," says Kenshu Shimada, a paleobiology professor at DePaul University in Chicago. “However, one of my recent studies has revealed that larger individuals inhabited more commonly in cooler waters than in warmer waters.”

Why is the Megalodon Still So Captivating?

Megalodons are fascinating to us because they were huge, effective and fearsome. There’s nothing else quite like them, says Shimada. “Megalodon is typically portrayed as a super-sized, monstrous creature in novels and films, but the reality is that we still know very little about the extinct shark,” he says.

But researchers infer that their place at the top of the food chain likely meant they had a big impact on the ecosystem in which they lived.

“Understanding the biology of Megalodon is critical in the ecological context because it is reasonable to assert that, as a major carnivore that lived in the past, the fossil species must have played an important role in shaping the marine ecosystems we know today,” says Shimada.

They’re also a bit of mystery that still intrigues us today. We’re not sure why they thrived and then disappeared. Some research says colder oceans made it more difficult for the mega shark to find prey, especially if it didn’t swim in the polar waters. Other research suggests many of the giant species that it preyed on started to disappear. They also could have disappeared because of competition from smaller sharks, like an ancestor to the great white or the famed and now extinct Macroraptorial sperm whale, a toothed beast that hunted similar prey.

Still, researchers aren’t completely sure of the cause, but do know they ceased to find them around 3.6 million years ago in the fossil record.

“There are still so many aspects of the basic Megalodon biology we don't know — from what it looked like to why it became extinct. The continued mysteries make paleontology a fascinating and exciting scientific field,” says Shimada.