Nature is filled with fathers who play a bigger parenting role than you might think. But seahorses and their sea dragon relatives take it to the next level — and this could help scientists answer some long-standing questions about reproduction. 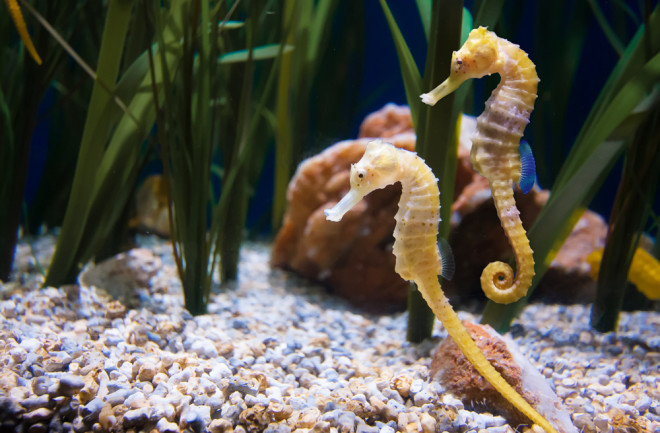 Across the animal kingdom, it’s usually females — the sex that produces the eggs — that gets pregnant or plays the biggest role in caring for those eggs after they are fertilized. Why this is true is still an evolutionary mystery, one that the researchers in Camilla Whittington’s lab at the University of Sydney, Australia, think about a lot. One of the ways they investigate this mystery is by focusing on the exception to that rule: the seahorse, the only vertebrate (animal with a backbone) where the males get pregnant.

To be sure, nature is filled with males that hold fertilized eggs in their mouths, such as Darwin’s frogs and cardinalfish, as well as males that stick eggs to their bodies, such as waterbugs, or that tuck young into pockets, such as the hip pocket frog.

But seahorse dads take this care to the next level, making sure that the eggs in their pouches get enough oxygen and don’t smother in waste. They have contractions when giving birth. Whittington’s own genetics research showed that seahorse dads have the right genes to produce nutrition for the eggs, but that didn’t prove that they did.

If seahorse dads supply nutrition to the eggs, then what comes out of their pouches (the newborn seahorses) would weigh more than the newly fertilized eggs. Whittington’s student, Zoe Skalkos, took on that research as an undergraduate honors project.

To have as little impact as possible on wild seahorse populations, four species of which are endangered, the lab uses pot-bellied seahorses bred in Tasmania for the aquarium trade in their research. At 14 inches (36 cm) in length, this is one of the world’s largest species of seahorses. But alas, in spite of what you might have seen in Aquaman movies, cartoons or comics, “seahorses are not rideable,” says Skalkos.

Another misconception that Skalkos hears often is that seahorses change sex. While hundreds of species of fish do change their sex, including clownfish and groupers, seahorses do not.

Skalkos started her experiment by capturing baby seahorses as they emerged from their fathers’ pouches. She weighed them, then dried them out and weighed them again. When she tried to collect the newly fertilized eggs from the seahorses’ pouches, she found that these dads weren’t merely carrying the eggs around like coins in a purse. The eggs were deeply embedded in the walls of the pouch and covered by pouch tissue.

Skalkos found that while the newborn seahorses weighed more than the fertilized eggs when wet, they could have gained that weight from seawater as they grew. When dry, the two weighed about the same. Still, that meant all the energy used by the developing seahorses while in the pouch did not come from the egg yolk, but from somewhere else. Skalkos believes the males provide that nutrition.

In the Sea Dragon’s Lair

Seahorses make male pregnancy look easy. Other fish species in the seahorse family, including pipefishes and sea dragons, may offer their own clues about the evolutionary origin of pregnancy as aquarium staffers try to coax them to breed in captivity.

Leslee Matsushige, associate curator at the Birch Aquarium at Scripps Institution of Oceanography, University of California San Diego, knew that getting the aquarium’s weedy sea dragons to reproduce was going to be difficult.

It wasn’t for lack of experience. Matsushige has helped the aquarium breed 13 different seahorse species since 1995. The Birch Aquarium has sent over 5,000 of its seahorse offspring to other aquariums, which allows people to learn about seahorses without pressure on wild seahorse populations. But only a handful of other aquariums have ever enticed sea dragons to reproduce in captivity.

While seahorse males have a pouch and female seahorses eject their eggs directly into that pouch, reproduction is trickier for other members of this fish family. Pipefish, which look like seahorses that have been pulled straight, have slits, grooves and flaps on their bodies where the eggs nestle, instead of a pouch.

Sea dragon eggs are even more exposed on the male’s tail. Once the eggs attach to the tail, Matsushige says, the tail skin swells, forming little cups in which the eggs are secured. But for years at the Birch Aquarium, eggs were never successfully transferred from the females to the males.

In a carefully controlled tank hidden from aquarium visitors, Matsushige and her team created the right conditions for the female sea dragons to produce eggs. Eventually, the conditions were right for the males as well. They joined the females in a cheek-to-cheek and tail-to-tail swim toward the surface. But time and again, the eggs didn’t make it from the female to the male’s tail. No wonder the females in so many animal species simply take care of their eggs themselves.

The Birch Aquarium husbandry team suspected that the sea dragons needed a bigger tank to complete the dance, but it was only a guess. Then, in 2017, a diver posted a YouTube video of weedy sea dragons mating in the wild. It was the first time a transfer of eggs in wild sea dragons had been captured on video. Matsushige could finally see what the mating swim was supposed to look like. The aquarium built a bigger tank.

In the bigger tank, there was a successful egg transfer, although only two of the eggs stuck to the male’s tail, instead of the usual 50 eggs. After the transfer, the male did a shimmy that Matsushige had only seen in the video of the wild sea dragons. She’s not sure if the male shimmies to attach the eggs more securely or to fertilize them, but either way, it seemed to have worked.

The aquarium hasn’t had another successful egg transfer since then, but Matsushige sees the overall trend as increasing success further into the reproductive process. “There have been successes and, sometimes, failures,” she says. “That’s how you learn.”

Skalkos says that every question researchers answer raises more questions. She wishes more people knew that this family of fishes is not just beautiful to look at, also but provides a key to understanding a fundamental concept of our world, how life goes on.