The Most Fearsome Ocean Predator Is This Superhero Shrimp

The CruxBy Thomas Cronin, University Of Maryland, Baltimore CountyAug 3, 2018 12:00 AM 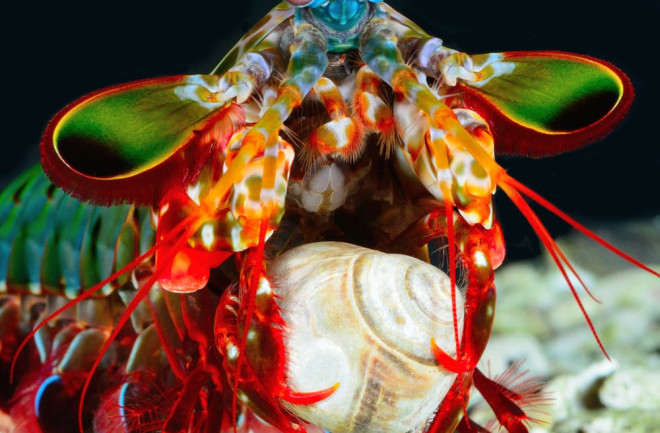 A version of this article originally appeared on The Conversation

. When you think about fearsome predators in the ocean, the first thing that pops into your mind is probably a shark. Sure, sharks are OK, with their sleek, menacing shape and their gaping jaws with rows of jagged teeth. But if you were a fish living on a coral reef or cruising along the shore over the sands of a tropical island, you would fear a far more terrifying predator. Consider an armored, tank-like creature looking something like a lobster. Most are quite small, often tinier than your little finger, though some can be as long as your forearm. This animal doesn’t swim around like a shark; instead, it hides in the sand or in rocky holes in coral, searching the water above with constantly roving eyes. It can snatch prey right out of the water in a tiny fraction of a second. And it accomplishes this feat without claws. Instead, it’s armed with a powerful pair of what scientists call “raptorial appendages” that end in a brutal hammer or a series of vicious, pointed spines. These prey-catching arms look somewhat like the front legs of a praying mantis, which gives these creatures their name – mantis shrimps. They’re crustaceans – the group of hard-shelled animals that includes crabs, lobsters and shrimps. The strength of the mantis shrimps’ raptorial arms together with their amazing eyes make them perfect predators.

Mantis shrimps’ raptorial appendages contain massive muscles that can extend them to their full length in hundredths of a second, producing strike forces that in some species can smash through the glass wall of an aquarium or instantly dismember a crab. These smashing attacks are so forceful they produce tiny bubbles in the water. When these cavitation bubbles collapse in a flash of light, they release additional energy onto the target. Boat propellers and turbine blades are often ruined by cavitation forces; mantis shrimps use them to crack the hard shells of their victims. Mantis shrimps – properly called stomatopod crustaceans – first appeared in the oceans about 400 million years ago, and have been evolving on their own route to perfection ever since. By now, they are only distantly related to any other living animal, including ones that arose from their crustacean ancestors. They’re so unusual that they seem to have arrived from another planet - in fact, vision scientist Mike Land jokingly calls them “shrimps from Mars.” There are almost 500 known species of mantis shrimp. However, they stay well concealed in their rocky and sandy burrows, and only a few scientists study them, so there are probably many new mantis shrimps yet to be discovered. Almost all live in shallow, marine waters, and most inhabit the tropics.

Like all crustaceans (insects, too), mantis shrimps have compound eyes – think of the eyes of crabs, bees, or butterflies. Each eye has hundreds of separate facets, each of which is a single unit of the entire compound eye. But mantis shrimp eyes are far more specialized than all other compound eyes, in some ways more than any other eyes biologists have ever discovered. For one thing, each eye is like three eyes squeezed into one. The three parts all look at the same point in space, much as our two separate eyes focus on the same scene. We use our two eyes to locate an object in space. Mantis shrimps can work out the distance to objects they’re looking at using a single eye. Two eye parts, at the top and bottom of the eye, are probably involved in this distance vision. The third part is built from parallel rows of facets that run around the middle of the eye like a belt. Usually there are six rows, though a few species have only two. This part of the eye is called the “midband,” and it supports many special abilities. Further, most mantis shrimps see ultraviolet light – part of the electromagnetic spectrum that causes sunburn in you or me and that is invisible to our eyes. Mantis shrimps not only sense this light, but with their specialized midbands they even see separate colors of it. This feature is on top of another set of color detectors that see the same visible light we’re used to – but in eight color channels as opposed to the three primary colors we see. Imagine trying to build a TV that looks right to a mantis shrimp. Besides the red, green, and blue colors that your TV uses to create a vivid picture, it would require pixels for violet, indigo, blue-green, orange and a deeper red than we can see. And the midband can do even more. It can detect the polarization of light – where all the waves vibrate in the same plane. Our eyes cannot see this property of light. Mantis shrimps image things using it. So putting together all its visual talents, when a mantis shrimp sees a fish, it’s in patterns of ultraviolet colors, eight primary regular colors and polarized light. Their eyes gather all this information and pass it on to the animal’s brain, so it can decide what to attack, when to attack it, how far away it is, and what it looks like in a dozen different ways. It’s hard for a human to even imagine the visual world of a mantis shrimp.

Letting Down Its Defenses

With superpower vision coupled to explosive predatory arms, it seems like mantis shrimps would be invincible. But even these animals have their worries. Mantis shrimps can not only kill other animals, like fish, octopus or crabs. They can also kill each other. This raises a serious problem. Eventually, it’s time to reproduce – but how does a mantis shrimp know when another one it meets wants to mate rather than make a murderous assault? Mantis shrimps have been forced to evolve ways to recognize when it’s safe to get intimate and to signal their own nonlethal intent. They use their special vision for this too. Mantis shrimps are often brightly colored, and they display patterns – invisible to us – in ultraviolet and polarized light. The complicated displays inform other members of their species, or of different ones, what they plan to do. If their plans include reproduction, and the viewer is of similar mind, then they can safely mate and initiate a new generation of their species. So, yes – sharks are all right. But do they have bullet-like strikes? Do they have super-vision? Can they take down prey in milliseconds? It’s mantis shrimps that have these abilities, and they use them to become some of the world’s most impressive predators. This article was originally published on The Conversation. Read the original article.