The Monkey Snuggle Market: How Much for a Quick Nuzzle? 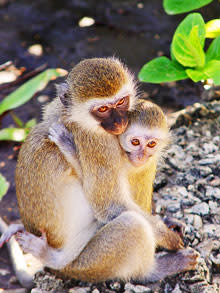 In some monkey species, monkey moms use snuggle time with their babies as a commodity. Mothers will "sell" time with their children to other females in their colony for the price of several minutes of grooming. As Science News puts it, they have a "do my hair before you touch my baby" rule. The research team who made this discovery, which was described in the journal Animal Behaviour, studied vervet monkeys and sooty mangabeys in the Ivory Coast's Tai National Park. Newborn infants draw crowds of female monkeys who want to touch, hold, and make lip-smacking noises at the babies. Touching of the baby can be had for a price of a few minutes spent grooming its mother, though it's not really known why female monkeys are so drawn to the young of others. The researchers use the idea of a "market" to understand this behavior because the time put into the grooming fluctuates with the youth of the baby and the availability of other babies. The younger babies get more grooming time for their mothers, and if there are few other babies around for competition the "price" is driven up, explains Science News:

One newborn mangabey, for example, the only baby in its group at the time, earned about 10 minutes of fur cleaning and combing for its mom. In contrast another lone baby didn’t even earn four minutes of grooming once it had reached the advanced age of almost 3 months.

The mothers are also stingy with who gets to get closest to the baby, said Science News

With enough grooming, moms permitted pretty much any female in their group to at least touch or sniff the baby. But it was mostly females with a history of grooming mom, presumably the well-known and accepted associates, who could actually hold the baby themselves.

Similar kinds of baby-trade markets have been observed in chacma baboons, long-tailed macaques, and spider monkeys. The process works the other way around in marmosets, where the moms pay others to hold the infants, but the researchers point out that marmosets frequently have twins, so an extra set of hands might be worth the cost. Related content: Discoblog: To Find This Snub-Nosed Monkey, Follow the Sneezes

The Loom: Monkeys in the mirror and the nature of science

DISCOVER: The "Monkey Whisperer" Learns the Secrets of Primate Economics