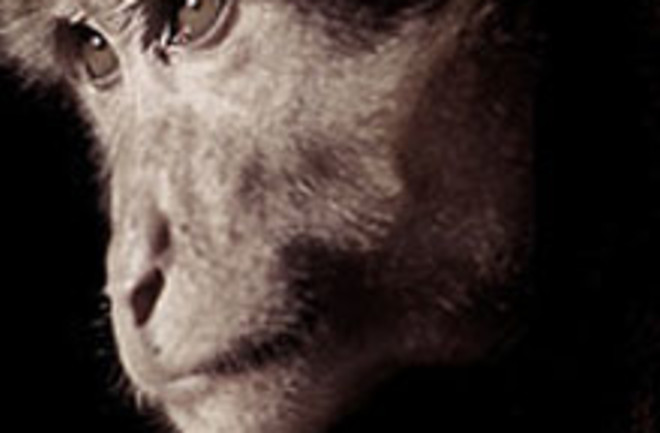 Scientists have taught monkeys to control a robotic arm with their thoughts. No, the primates aren't telekinetic—they have computerized brain implants—but their newfound ability is one of the most impressive examples yet of linking brains to machines. The research team, led by Andrew Schwartz from the University of Pittsburgh, used two macaques in their study. They planted a tiny computer grid over each primate's motor cortex, an area of the brain that normally controls the monkey's arm movement. Then they mounted the robotic appendage, complete with elbow and shoulder joints and a claw for grabbing, on each animal's shoulder where its normal arm is attached. The computerized implant would read the monkeys' minds—or rather, it would pick up on their motor neurons firing—and translate those electrical impulses into the appropriate maneuver in the machine. Researchers then placed several kinds of food in front of the macaques and encouraged them to reach for it with the robotic arm and chow down. Not only did the monkeys learn to feed themselves with the electronic limb, but within a few days they became regular pros—opening the claw before it reached the food, not gripping too tightly to avoid crushing a piece of fruit, and slowly letting loose to drop the food in their mouths. They even adjusted to a marshmallow's gooey consistency, licking away the remnants stuck to the prosthetic fingertips. The scientists hope this experiment leads eventually to human uses, like new prostheses for victims of spinal cord injuries. But if you were thinking this research would allow you to get in touch with your inner cyborg, you might be in for a disappointment. Implanted computer grids like the one Schwartz's team used endure for only a few months at best. And no one has developed a wireless system yet, so you'd be stuck with cables in your scalp.