The Maya Civilization's Religion Was More Than Just Ritual Sacrifices 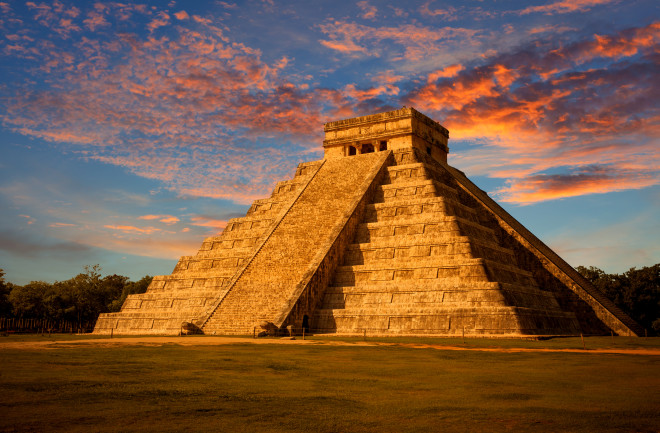 For many people in the Western world, Maya culture has been reduced to sacrificial rituals, disfigurement, bloodletting and other dark depictions of an ancient Mesoamerican civilization.

But this narrow fixation on ritualistic murder — a lurid gloss on a complex, shifting theology — obscures a great deal about the Maya and their gods. While the macabre undeniably played a part in this spirituality, it was only a small portion of a larger, dynamic belief system still held by Maya people today.

Earlier Maya civilization, as historians understand it, was deeply influenced by religion. Maya cities like Tikal and Chichen Itza, in modern day Guatemala and Mexico, respectively, contain massive stone temples where important rituals would take place. Ceremonies and observances honoring or appealing to their deities were interwoven throughout the year, and their rulers were seen as important intermediaries to the gods.

This Maya culture also saw the physical world as intimately interwoven with the spiritual one. As with the ancient Greeks, their many gods were seen as beings who once walked among their people, and who created (or brought about the creation of) humans. Numerous deities populated the Maya pantheon, including gods for physical elements like rain and demigod-like heroes who fought for the good of humanity.

It’s important to remember, too, that Maya religion was not always the same across different time periods or regions. Based on differences in deities carved into stone or adorning temples, it seems likely that different Maya city-states held slightly different beliefs. And today, hundreds of years after the Spanish came to the New World, Maya people in Central America and Mexico practice a religion that draws from these traditional beliefs as well as Christianity.

The Many Maya Deities

We know about Maya religion today from a number of sources. This includes information from Maya glyphs, artwork, surviving Maya texts like the Dresden Codex, later works like the Popol Vuh and Maya people who still observe traditional religious ceremonies. Collectively, these sources reveal shifts and variations in Maya belief.

Even during the Maya Classic period, the heyday of this civilization during the first millennium A.D., Maya theology likely varied from place to place. The civilization consisted of a number of disparate city-states, rather than a single, unified empire. As such, religious beliefs and deities seem to have differed somewhat. Glyphs showing gods, for example, vary from place to place and time to time. But there are broad similarities, including a number of major gods and religious observances and beliefs.

To appreciate the theology, you must consider how Maya people generally viewed the world. The physical and spiritual realms were intimately interwoven with each other, writes archaeologist and Maya scholar Stephen Houston. This often meant that things we might view as simple representations of concepts were far more real. Statues of gods were actually gods. Buildings needed to be fed. Planting corn and building houses were rituals.

“For them, religion was not a matter apart from everyday life, but rather one that explained it, undergirded it, enveloped it and provided an idiom for appropriate behavior,” Houston writes. In other words, to them, the gods were simply another part of their world.

The Maya had many gods, both major and minor. Prominent among these were deities that corresponded to elemental aspects of Maya life: Chaac, the rain god, K’inich Ajaw, the Sun god, Ix Chel, the goddess of medicine and fertility. Itzamna was the god of creation, considered by the Yucatec Maya to be the first priest, who invented writing and books and divided the lands among the people. An elderly god known as Pauahtun was often portrayed as four different aspects, each of which held up a corner of the sky. Additionally, Maya gods often took the form of jaguars, such as the fearsome lord of the night sun, a god of the underworld.

The maize god, who may have been called Hun Hunahpu, also featured prominently in Maya theology, often with a shaved scalp and leaves of corn growing from his head. Versions of these gods appear throughout Maya culture, though they are sometimes represented slightly differently, and may have fit into Maya theology in different ways at different times.

There is also the story of the hero twins, Hunahpu and Xbalanque, known largely from the Popol Vuh, a text of Maya beliefs and myths written after the Spanish conquered the Maya. It’s not clear whether the twins were gods themselves, or perhaps simply beings with powers beyond that of mortals. The twins were said to have killed the monster bird Vucub Caquix, who ruled over the world preceding ours.

Along with the major gods, Maya religious beliefs also involved numerous minor deities. Some scholars have suggested these lesser beings may have been associated with specific places or dynasties, and they disappeared from the Maya consciousness when, for example, a new ruler was crowned.

In keeping with the their conception of the intertwined spiritual and material worlds, the Maya conceived of their gods as real, physical beings. As with the ancient Greeks, many of the gods’ exploits were said to have occurred far in the past, and these stories often served to help explain aspects of our world today. But people could still plead and bargain with these gods.

The specific ceremonies and rituals the Maya observed likely varied, but they were often regulated by the Maya calendar, which was based on astronomical observations and split into two years of different lengths. The 260-day tzolk’in calendar and its 365-day counterpart, haab, dictated when various ceremonies took place, as well as yearly agricultural events.

Maya ceremonies often included dancing, usually involving the rulers who were called upon to intercede with the gods on their people’s behalf. Evidence indicates that royals would sometimes wear face masks representing the gods during these ceremonies.

At other times, the Maya would take a more direct approach to their requests. One scholar recounts an example of effigies of certain gods being hung upside down — the goal being to convince uncooperative deities to play nice. It’s an example, Houston says, of the Maya conception of the gods as real beings, both supernatural and bound by physical constraints like we are.

But this relationship cut both ways. Because the gods were real, Houston writes that the Maya also saw them as needing regular sustenance. This is where sacrificial ceremonies had their place.

Not every ceremony involved blood or death. Offerings often consisted of food or incense, accompanied by the ceremonial ministrations of a priest. But, in some cases, blood was called for. This would often take the form of ritual mutilation, carried out by the rulers on behalf of their people.

There’s a good deal of evidence that Maya kings would cut or pierce themselves, with bone awls, stone blades and even the spines of stingrays to draw blood as an offering to the gods. And, in some cases, the Maya would sacrifice the lives of their people to appease these gods.

The sacrifices weren't driven by an affinity for murder; as the Maya understood it, the offerings were essential to their continued well-being, says Houston. The gods, who controlled crucial aspects of their lives like rainfall and crop growth, needed occasional appeasement or sustenance in order to do their jobs. Sacrifices, even deadly ones, were simply part of the relationship between the gods and the Maya people.