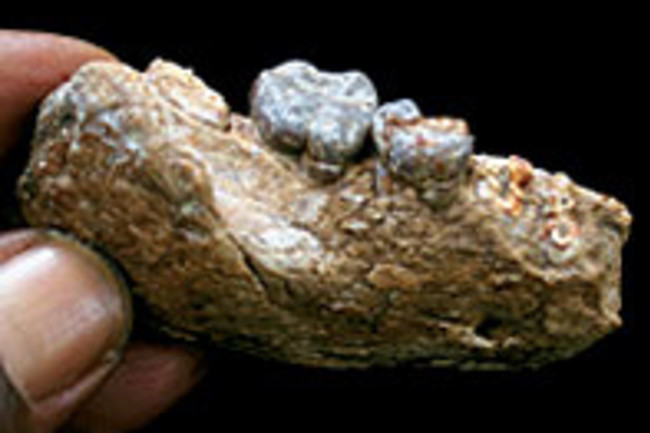 The teeth of Ardipithecus ramidus seem chimpanzee-like, but the hominid may have walked on two legs. | Courtesy of Sileshi Semaw/Indiana University

Finding new species of any large mammal is a challenge, and new primate finds are notoriously rare. But so far this year, field biologists have turned up new species from two branches of primates, as well as new fossils of what may have been the first hominid.

Leaping lemurs: Two new species of the most ancient primate known bring the total number of lemur species to around 70. (Difficulties assessing species divisions make pinning down the exact number impossible.) Both were found in Madagascar, the only known home to lemurs. The first, Seal’s sportive lemur, was discovered in rain forests on the island’s east coast. The second, the Mitsinjo sportive lemur, was found in the dry forests on the west coast. Edward Louis, the zoo conservation geneticist in Omaha, Nebraska, responsible for the finds, says this is just the beginning: “Lemurs, especially the nocturnal ones, haven’t gotten the attention they’ve deserved. I think we’ll top a hundred in five years.”

High-life monkey: Nature Conservation Foundation biologists on an expedition in India announced the serendipitous find of a new monkey. The stocky, short-tailed macaque called Macaca munzel is known to native villagers as a deep-forest monkey because of its notorious shyness. The last new macaque species, the Indonesia Pagai macaque, was described in 1903. With its preference for forests in the foothills of the Himalayas, M. munzel lives at one of the highest altitudes of any primate previously found.

Missing link: Nine skeletons found in northern Ethiopia dating to about 4.5 million years ago—less than 2 million years after the lineages of humans and apes split—have scientists wondering if the remains are related to humans. Found by paleoanthropologist Sileshi Semaw of Indiana University, all the fossils belong to Ardipithecus ramidus, who looked more like a chimpanzee than a human but did walk upright. Semaw and his colleagues are now searching for remains of other hominids in the area in hopes of nailing down A. ramidus’s place in our family tree.