The Lingering Mystery Behind the Lost Roanoke Colony

Centuries later, scholars still aren't sure how 115 people vanished after arriving in the New World. Recent evidence has only complicated things. 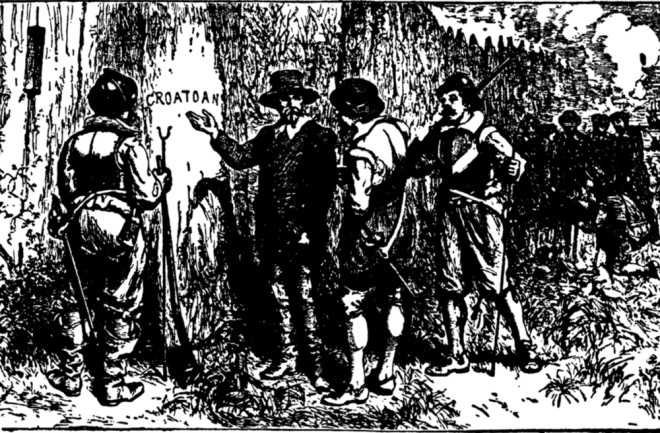 How could 115 men, women and children just disappear?

It’s a question that has haunted historians and archeologists for hundreds of years. The mystery began in 1587, when a group of English colonists landed at what is now known as Roanoke Island, which sits in the outer banks of North Carolina. “Their idea was to create an English village,” says journalist Andrew Lawler, author of The Secret Token: Myth, Obsession, and the Search for the Lost Colony of Roanoke.

The colonists were middle-class Londoners who sought to escape the city’s filth and disease, and saw the New World as a way to acquire land. “It was an Elizabethan back-to-the-land movement,” Lawler says.

The group was led by John White, who had been appointed governor of the new colony by Sir Walter Raleigh, the expedition’s financier. Soon after arriving, White returned to England to gather more supplies. He intended to depart for Roanoke immediately, but a naval war with the Spanish prompted Queen Elizabeth I to order all ships into service. White could not sail across the Atlantic until 1590.

When he finally arrived at Roanoke, White found the colony had been deserted. The buildings lacked signs of burning and he didn’t find human remains, so he couldn’t assume the colony had been massacred by the Indigenous Algonquian people who resided there. “It looked like the colonists had left in an orderly manner,” Lawler says.

At the time, White knew the inhabitants had considered moving 50 miles inland. Before he left Roanoke in 1587, he had asked them to leave a carving in a tree or stone to communicate their new location if they moved. As he surveyed the abandoned settlement, he saw the word “CROATOAN” carved into a fence post and he assumed they moved to a Croatoan Island (now known as Hatteras), which was located about 60 miles south.

But rough weather prevented White from visiting the other island. He intended to spend the winter in the Caribbean and locate the colonists in the springtime. Ultimately, his ship was pushed so far off course that he headed home to England.

No one saw the colonists again.

Despite being forced home, White hoped to return to the Roanoke settlers. His own daughter had joined the colonists with her husband and given birth to his granddaughter, Virginia Dare. But his financier, Raleigh, was involved with other ventures that interested him more. Raleigh was also attempting to gain a monopoly over sassafras, and he was later imprisoned for treason. “He really comes across as much more of a villain than I expected in my research,” Lawler says.

In 1603, a search expedition tried to locate the colony, but they encountered bad weather and the battle-ready Indigenous people of Chesapeake. Several years later, a Jamestown settler heard from the Powhatan about Europeans who lived among the Algonquin to the south. They were said to dress in European clothes and live in stone houses.

“A lot of historians say this is evidence, but I say after 20 years, you would wear what the native Americans wore,” Lawler says. “This is likely people who were Spanish living further south in Georgia and Florida.”

In 1622, the Powhatan attacked the Jamestown colony and killed one-third of the English speaking population. The English began assuming the colonists at Roanoke likely suffered the same fate, and the narrative of annihilation took hold.

While the Jamestown colonists warred with Indigenous Americans, Lawler says many early European settlers assimilated into their nearby tribes. “Why? Because they knew how to eat well, live well, and they didn’t have the strict military life,” Lawler says.

It was highly likely that the Roanoke colonists began living with the Algonquin and adapted their way of life, he adds. Lawler thinks Europeans who were abandoned on the shores of the New World would likely have cast their lot with Native Americans who knew how to survive.

In fact, there is evidence of other Europeans joining Native American tribes well into the eighteen century. “We’ve learned they knew how to adapt quite fast. They learned the language and customs. They might have looked European, but they amalgamated very quickly,” Lawler says.

The idea of the massacred Roanoke colony, however, gained popularity in the nineteenth century. Lawler says the possibility of Europeans choosing to live among native Americans went against the racist ideology of the nineteenth century. In particular, White’s Roanoke-born granddaughter, Virginia Dare, became a symbol of white supremacy.

Some scholars, however, say it’s likely Virginia Dare assimilated with the Algonquin and her own grandchildren may have never even realized she was English.

Given a lack of concrete evidence behind the disappearance of the Roanoke colonists, scientists are still trying to determine if any artifacts can offer insight as to what actually transpired. But the results have so far proved inconclusive.

In 2015, a team of archeologists with the First Colony Foundation excavated a site they believed was an “X” covered up on White’s map with a patch, possibly to conceal the colony’s location if the document fell in the hands of the Spanish. At what was dubbed Site X, the archeologists found pieces of Elizabethan pottery, which Lawler cautions could have been brought by later colonists.

In 2020, a dig at Hatteras also found artifacts that might have belonged to the missing colonists. The Croatoan Archeological Society unearthed European artifacts, including part of a sword and gun. According to this evidence, scholars are now considering whether the lost colonists split into groups and joined different Algonquin tribes.

“Now we have something to argue about,” Lawler says.