800 years ago, a young man rose to power in Mongolia. The world would never be the same. 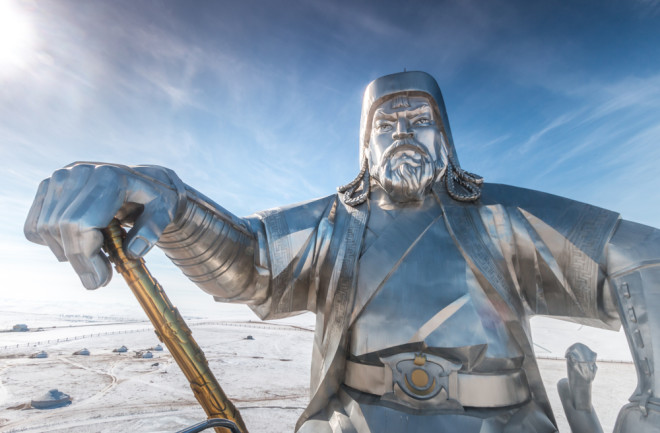 A statue of Genghis Khan on the bank of the Tuul River in Ulaanbaatar, Mongolia. (Credit: Anonymousz/Shutterstock)

In the 12th century, a baby was born to a member of a Mongolian royal family named Yesügei. The baby came into the world, according to legend, holding a blood clot in his hand — an auspicious sign. The baby was called Temüjin, though the world would come to know him by a different name: Genghis Khan.

That name (or title, really; it’s thought to mean “universal ruler”) carries with it to this day the faint cries of battle and destruction. Sacked cities, burning fields, countless dead — the image of Genghis Khan is a bloody one. But in the process, he created an empire that would come to span dozens of today’s countries. He united the people he conquered under a single authority that also pioneered modern concepts like a census, postal system and religious freedom.

Ruthless in battle, Genghis Khan was also a curious and adaptable leader, seeking out new opinions and incorporating foreign ideas into his philosophy of rule. He thought ahead to plan his empire’s fate after his death, as well, forestalling the chaos of a power struggle. Today, his legacy includes not only a lasting impact on modern geopolitics, but a widespread genetic lineage — nearly one in 200 men today are direct descendants of Genghis Khan.

The story of the Khan is one of hardship, ambition, cruelty and, ultimately, the kind of success that is difficult to even dream of. But at the beginning, it was almost nothing at all.

The life of Genghis Khan is known to us largely today because of one source, “The Secret History of the Mongols,” a text written for the Mongol royal family after Genghis Khan’s death, though the author remains unknown. As such, it is difficult to verify much the information therein, especially that concerning the Khan’s early life.

According to the text, young Temüjin’s father was killed by tribal enemies. The family was cast out to wander the steppes, eating wild animals and barely surviving. From this ignoble beginning, Temüjin began to slowly make a name for himself. At a young age, he killed his older half-brother and assumed control of the family. When his bride was stolen by a rival tribe, he allied with another powerful family and led a force of 20,000 men to take her back.

From there, Temüjin began to slowly conquer nearby tribes, gaining strength each time by assimilating the defeated under his own banner. An exemplary early victory came over the Tatars, a powerful confederation of Mongol tribes. The success put him on a path to uniting all of Mongolia, long riven by internecine struggles between various tribes. It was here that Temüjin’s reputation for cold-bloodedness also became apparent. The leader decreed that all men taller than a cart axle — anyone who wasn’t a child, essentially — be slaughtered. It was brutal, but also strategic: Culling the adult men removed the potential for later uprisings against his rule.

By the year 1206, Temüjin had brought all of Mongolia under his control, an exceedingly difficult act in a land of warring, rival tribes. That year, he was given the title Genghis Khan by the Mongolian people, and began to turn his attention outward.

Military campaigns and victories against China and others in the region followed, defining the rest of Genghis Khan’s life. He first defeated the Tangut kingdom, which occupied what is now northwest China, then turned to the powerful Chinese Jin empire, sacking their capital city Zhongdu (located in modern-day Beijing), in 1215.

The Mongols began as an extraordinarily effective cavalry, wielding bows and arrows from horses and overwhelming opponents. And their army proved widely adaptable as they encountered new challenges, adopting siege tactics and catapults and ladders to overwhelm cities. This openness to new techniques would serve Genghis Khan well as he ventured beyond Mongolia.

A protracted campaign against the Khwārezmian dynasty, in western Asia and part of modern-day Iran, would occupy much of the rest of Genghis Khan’s life. Begun when the Khwārezm Shah murdered a trade delegation from the Mongol Empire, the war would eventually extinguish the Khwārezmian rule and further expand the boundaries of the Khan's empire.

The campaign was also notable for its extreme violence, even by Genghis Khan’s standards. Cities were sacked, their inhabitants murdered, and fields and irrigation channels destroyed. The Mongol troops are said to have used captured soldiers as body shields when sieging cities.

After returning home in 1223, the Khan left war aside for a time, until his final campaign in China. It was there, during a campaign against the Xi Xia empire that the universal ruler met his death, likely after being thrown from a horse. He was buried in an unmarked grave, its location unknown.

Genghis Khan left an enormous empire in the wake of his death, and subsequent campaigns by his sons and generals would expand its borders even further. The Mongolian Empire spanned between southeast Asia and eastern Europe at its greatest extent, and encompassed an area of about nine million square miles. During his lifetime, Genghis Khan also oversaw bureaucratic advancements such as a census and the establishment of an effective postal service that used relays to move messages quickly, as well as the development of a written Mongolian alphabet.

From early in his military career, the Khan promoted a meritocracy, upending the traditional aristocracy of the Mongolian steppes. It was a policy that would continue throughout his rule and after his death. Genghis Khan also promoted religious freedom and banned the use of torture throughout his kingdom. After his death, the Mongol Empire would nurture trade routes and diplomatic relations that helped sustain its strength and brought news and knowledge from the outside world to Asia.

Though he appears to have been an efficient, and even at times beneficent ruler, there’s no denying the horrendous impact of Genghis Khan’s conquests. Cities were razed, and their populations killed. The Mongol invasion of modern-day Iran has been blamed for a centuries-long decline in Islamic civilization there. The Xi Xia culture, some argue, was essentially annihilated by the Mongolian armies.

And Genghis Khan left his personal imprint on the populations of today, in the form of a set of genes, called a haplotype, common to about 0.5 percent of men today. This haplotype is spread geographically across roughly the extent of the Mongolian empire and dated to around a thousand years ago, leading scientists to surmise that it represents the ancestry of Genghis Khan himself.

It’s powerful evidence of the influence Genghis Khan had on the world of today, and of the lasting power of the Mongol Empire. But the genetic heritage is also a reminder of the way  the Mongol ruler rose to prominence. To leave such a legacy, he and his family would have had to sire a ridiculous amount of children. And those children came from mothers who were most likely counted among the spoils of war for Genghis Khan and his followers. Once the Khan came, his rule was absolute — for better or for worse.