The Leaning Tower of Pisa Wasn’t Supposed to Lean

An engineering screw-up became the symbol of the city of Pisa. 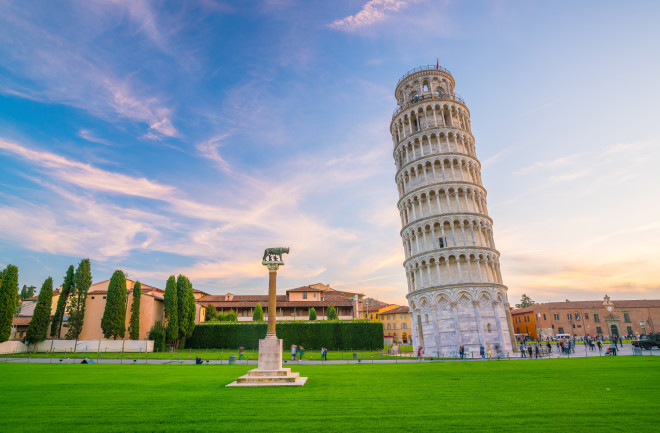 Italy’s iconic symbol that attracts thousands of tourists a year was the result of an engineering screw-up. Yes, you read that right. The architects of the Leaning Tower of Pisa didn’t want the building to lean. Yet the accidental tilt ultimately launched the building into fame, even classifying the structure as a UNESCO World Heritage site.

The Mystery Behind the Tilt

The construction of the tower began in 1173 as part of a grand cathedral project to flaunt the wealth and military victories of Pisa. The full complex, known today as the the Piazza dei Miracoli (or the Square of Miracles), included a cathedral, baptistery, cemetery and bell tower, which we now call the Leaning Tower of Pisa. That single tower wasn’t planned to be more significant than its neighboring buildings, but its architectural oops made it unique.

Problems arose shortly after construction began on the white marble bell tower. Perhaps, the site itself may have been the root cause of the problem. The ground beneath the tower was composed of clay, fine sand and shells from the Arno and Serchio rivers that frame the city of Pisa. By the time the builders finished the second of eight stories in 1178, the tower’s foundation had begun to settle unevenly. As a result, the tower started to tilt toward the south.

Shortly after, Pisa fought wars against Genoa, Lucca and Florence. The conflicts caused a halt in construction for almost 100 years. The century-long delay allowed the foundation of the bell tower to settle further and prevent any likely collapse.

According to Smithsonian Magazine, the tower took approximately 200 years to build from start to finish, with several work stoppages. While working on the eighth floor of the tower, builders angled the story to the north to counterbalance the tower's southern drift. However, this too proved to be a failure as the additional weight caused the structure to tilt even farther. After the tower was completed around 1370, the drift continued.

Over the next six centuries, the lean became an integral part of the tower’s appeal. The tower continued to sink at an annual rate of .05 inches, and by 1990, it was at a heightened risk of collapse. The monument closed to visitors as engineers attempted to stabilize it.

According to one study published in 2003, the Tower of Pisa's stabilization proved to be an immensely difficult task due to the weak base in the foundation. Any disturbances in the ground beneath the foundation could threaten its collapse.

The Italian Government organized an international committee, including experts in the arts, restoration and structural and geotechnical engineering to help stabilize the monument. The 2003 study explained that restoration was possible by removing small volumes of soil from beneath the north side of the tower’s foundation. It was the least invasive technique, and promised to reduce the tilt from about 15 to 13.5 feet.

The stabilization work was successfully completed in 2001, bringing the tower back to a 4-degree incline, as it was 200 years ago. It was then reopened to the public.

In Case of Earthquake

Since the year 1280, four strong earthquakes have hit this region of Italy. And still, the Leaning Tower of Pisa stands strong. George Mylonakis, from the University of Bristol's Department of Civil Engineering, wanted to understand why and how.

In 2018, Mylonakis joined a team of 16 engineers to study the seismological, geotechnical and structural information on the tower, according to Phys.org. Their research found that survival of the tower could be attributed to a phenomenon known as dynamic soil-structure interaction.

“Ironically, the very same soil that caused the leaning instability and brought the tower to the verge of collapse can be credited for helping it survive these seismic events," Mylonakis said in 2018 after the findings were released.

Engineers now think the Leaning Tower of Pisa is expected to continue to defy gravity for at least another 200 years — or longer.