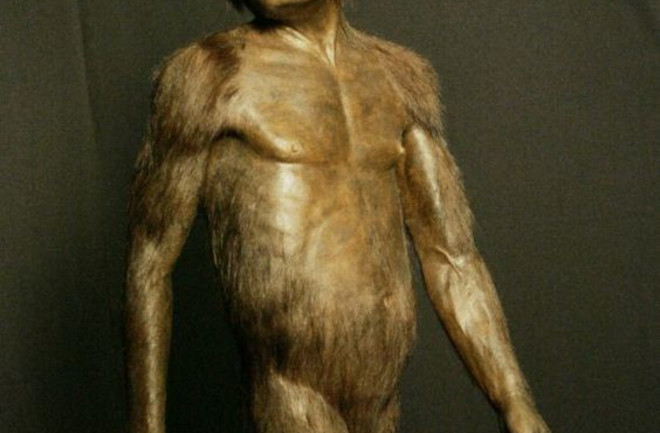 3.18 million years ago, the member of Australopithecus afarensis better known as Lucy walked around what's now Ethiopia. But researchers still debate how she walked — and how much time she spent on the ground. (Image credit: Associated Press) Hey Lucy, you got some more explainin' to do. A controversial study published in August proposing that a fall from a tree killed Lucy, the world's most famous fossil, was just the opening salvo in a renewed debate. Researchers announced an even bigger breakthrough today: Analysis of micro-CT scans reveal Lucy was at home on the ground and in the trees, a finding that puts the team at odds with some of the field's biggest names. Researchers from Johns Hopkins University and the University of Texas Austin looked at cross sections of micro-CT scans of Lucy's upper and lower limb bones. The team compared the virtual slices with those of other early hominins plus modern humans and modern chimpanzees. Over time, use of limbs in load-bearing activities — such as, say, swinging from one tree branch to the next — thickens the bones' outer layers. "You can see the skeleton responding dynamically," says UT paleoanthropologist John Kappelman, an author on both today's paper and the August study on Lucy's apparent cause of death. "That was really the point of this whole paper, and the point of scanning Lucy. We wanted to see how she lived. Because the skeleton is plastic in the way it dynamically responds to loads, looking at this question of loading we can get at how the body, how the skeleton experienced mechanical loading during life." It's the first time that anyone has turned to micro-CT scanning to determine an early hominin's locomotion. And Kappelman and colleagues believe their findings will lay to rest what's long been a contentious argument over how and where Lucy lived.

To recap: More than 40 years ago, paleoanthropologist Donald Johanson found Lucy's remains in the Afar region of Ethiopia. The partial skeleton — the most complete member of Australopithecus afarensis ever discovered — was about 3.18 million years old. Crucially for today's research, Lucy had bones from both her upper and lower limbs preserved. Early hominin fossils are typically much more fragmentary, a jawbone here and a couple finger bones or femur there. We'll get to why that matters in a moment.

While not complete, Lucy's skeleton includes enough of her upper and lower limbs for researchers to analyze how she might have moved as a whole individual — something impossible to do with more fragmentary remains. Image provided by John Kappelman/The University of Texas at Austin. Like all members of A. afarensis, Lucy had a mix of primitive and advanced traits. Some of her anatomical specializations, such as curved fingers, are also seen in tree-dwelling species. Hey, if you're moving from branch to branch high above the ground, it helps to have fingers that can give you a good grip. But other anatomical adaptations, particularly in her lower body, were similar to a fully bipedal hominin, like any member of the Homo genus. Johanson and other researchers concluded that Lucy was grounded. She spent her time walking upright on two legs like we do, not like chimps and other primates that put four on the floor over any distance. Curved fingers and other traits associated with living in trees were, the theory went, mere remnants of arboreal ancestors. It's a position Johanson and some of his colleagues have stuck to over the years. "Australopithecus afarensis was essentially a terrestrial animal," he noted in a statement he e-mailed back in September in response to Kappelman and company's earlier paper suggesting Lucy died from massive injuries sustained in a fall from a tree.

The August study based Lucy's cause of death on specific types of fractures visible in the same micro-CT scans used in today's study. The terrestrial-Lucy camp was understandably up in arms about that earlier paper's conclusion that A. afarensis was up in trees. Other critics of the paper contended that not all the scans were released to the community for review: a decision made by the Ethiopian government, which controls access to the scans, rather than by the researchers themselves.

UT Austin professor John Kappelman studies Lucy's skeleton in the National Museum in Addis Ababa, Ethiopia. Credit: Lawrence Todd/University of Texas. Lost in the academic kerfuffle was the fact that finding Lucy's cause of death was never the intention of the researchers. They wanted to use the scans, made in 2008, to understand Lucy's locomotion. Because much of both her upper and lower body is preserved, the team could study her as a whole individual, how she moved and what that might tell us about her lifestyle. And today in PLOS One, they announced: mission accomplished. According to the team, Lucy's skeleton shows clear evidence of significant time spent in the trees, perhaps a third or more of her entire life. Comparing Lucy's scans with those of other ancient and modern hominins, as well as modern chimpanzees, the team found that Lucy, and thus likely A. afarensis, fell into an intriguing middle ground.

Chimpanzees overall are significantly more muscular and pound-for-pound stronger than us puny humans. Yes, even this guy:

Why so glum, chum? Work your smile along with those biceps! Credit: iStockphoto. Proportionally speaking, however, humans are stronger in the lower body than the upper, and chimps are stronger in the upper body than the lower. It makes sense. Our species spends most of its time walking around (or, ahem, sitting at a desk) while chimps spend a significant amount of their time in trees (though how much time exactly varies by population) where upper body strength is much more important. What researchers saw in Lucy's scans, however, was that she fell in between hominins (modern and ancient) and chimps in terms of both overall muscularity and which parts of her body appeared to have experienced habitually higher loading. In general her musculature was closer to that of chimps. While the terrestrial-Lucy camp might argue any chimpishness in her anatomy was an incidental holdover inherited from ancestors, the micro-CT scans used in today' study rule that theory out. The scans show her considerable upper-body strength was the result of frequent loading. You can see similar instances of bones being remodeled through frequent loading in some athletes. The bones in the dominant arm of a serious tennis player, for example, are typically thicker than in the player's other arm. And watching many elite gymnasts compete, you can see how years of intense training have built up muscles and modeled bone to create powerful upper bodies capable of flipping around the uneven bars with ease and grace. On the flip side, no pun intended, astronauts' bones thin out in the near-zero gravity off-planet because they're not experiencing the same loading they would on Earth.

The kickass women of the 2016 U.S. Olympic gymnastics team have a lot of medals — and broad shoulders with plenty of muscle. Years of intense training resulted in musculoskeletal changes that allow them to pull off high-flying athletic feats. Credit: USA Gymnastics. “The point of doing the CT scans and applying engineering theories ... is based on the plastic ability of the skeleton to respond to loads through life," says Kappelman. "We know how it works. The example of the gymnast, of the tennis player, of astronauts in space — as soon as we leave Earth’s gravity we start shedding our skeleton. The skeleton responds dynamically." Kappelman believes the findings demonstrate that signs of arboreal living in Lucy's anatomy are not mere ancestral leftovers. "In Lucy’s case, this is our workaround to the tired old argument of 'it’s a primitive retained adaptation that has no functional significance.'" Lucy would not have had so robust an upper body, the researchers believe, if she hadn't been habitually using her arms and shoulders to haul herself around, high in the trees. Because her feet were already adapted to walking bipedally on the ground, and therefore a lot less handy (pun intended) for climbing trees, it's possible that Lucy built up those big guns because she needed even more upper body strength, proportionally speaking, than the average chimpanzee, which retains adaptations in the foot perfect for climbing. Given her small size (the shortest gymnast would still tower over her) in an ecosystem full of larger, toothier predators, it's reasonable to think she and other members of A. afarensis climbed into the trees to sleep in relative safety. They may have spent additional time in the trees foraging. So it's possible Lucy and her kind spent a third of their lives in the trees — and that Lucy died after tumbling out of them. "I think that by demonstrating with an independent data set that Lucy very likely spent enough time in the trees that the evidence is preserved in her bones provides additional support for the idea that she may have fallen out of a tree as well," says Kappelman. "This data could have gone the other way... She could have come out looking human... But she didn’t. She comes out showing a similarity to chimpanzees which suggests that was due to climbing. That supports the idea that she may well have fallen out of a tree." The study also found subtle differences in Lucy's leg bones which suggest that, while she was fully bipedal when walking on the ground, she probably had a slightly different, less efficient gait than members of the Homo genus. It's likely that she would not have been comfortable walking long distances, something our species evolved to do tremendously well. Today's paper, by the way, is open access and a fascinating read, with plenty of hints about where the research is headed next. Take a read!