Over the last decade, researchers have delved into a disappearing technique in the highlands of New Guinea that preserves loved one's faces — even long after death. 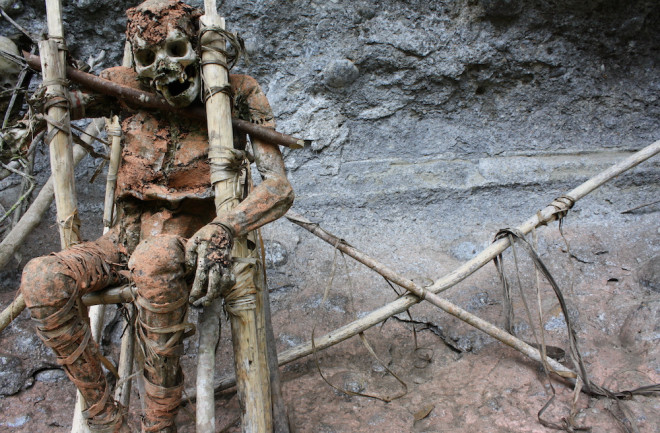 By 2008, the condition of a Papuan village leader named Moimango had already been deteriorating for decades as he sat on the side of a cliff roughly 1,000 feet above a valley floor. His position beneath an overhang protected him from rainfall, but wind erosion was still slowly taking its toll.

Moimango had spent quite a lot of time up there since he passed away in the early 1950s. After his death, he was mummified in a traditional process that had been conducted for generations by the Anga people of the highlands of northern central Papua New Guinea. But his son, Gemtasu — a clan leader himself in the village of Koke, located below the cliff — was concerned about losing a visceral connection with his father as his body degraded.

In 2004, biomedical scientist Ronald Beckett was attending the World Congress on Mummy Studies in Torino in Italy when he learned of the Angas’ tradition. Ulla Lohmann, a photojournalist who had worked in Papua New Guinea, told him Gemtasu wanted to restore his father’s mummified corpse and rekindle interest in traditional mummification processes.

At the time, Lohmann asked if Beckett, who works at Quinnipiac University in Connecticut and has long researched mummies in other parts of the world, if he would be interested in traveling to Papua to observe and help restore the decades-old mummy. “She told us an amazing story about the village elder, named Gemtasu, who wanted to carry on the process of mummification,” Beckett says.

Faces From the Past

Gemtasu sought to keep his memories of Moimango alive, but, more broadly, he worried that the mummification ritual — which has been passed between generations by oral tradition — would disappear among his people.

While Egyptians famously mummified their dead so they would travel intact to their spiritual afterlife, the practice doesn’t carry the same connotations among the Anga people. Andrew Nelson, an anthropologist at Western University in London, Canada, has learned through his ethnographic research that the Anga don’t traditionally believe in the afterlife: They mummify primarily to preserve the face of the dead. In a world before photographs and video, Papuans could use this technique to revisit their lost loved ones whenever they missed them. “The face is the person, the personality, what they knew, their experiences,” Nelson says.

Ron Beckett performed endoscopic observation on the Koke mummies during the pair's 2010 trip. You can also spot the coffins that represent a more recent death ritual. (Credit: Andrew Nelson)

It’s unclear how long mummification has been practiced by the Anga people, who commonly answered Beckett with the response, “It’s our way.” By the time Beckett and Lohmann visited him in 2008, Moimango likely had spent at least 50 years on the cliff. “Chances are it’s been going on for a very, very long time, but there’s no fossil or archaeological record of this,” Beckett says.

Since many of these remains were left in open air rather than inside hermetically sealed sarcophagi — a traditional Egyptian practice — most mummies probably didn’t last much longer than Moimango. Beckett predicted that the body of Gemtasu’s father would have likely completely decayed within another 20 years or so.

The Anga people’s mummification rituals had begun to disappear under the influence of Christian missionaries, who viewed the practice with contempt. When Beckett first visited the small niche on the cliff above Gemtasu’s village of Koke, he found several types of mortuary techniques that revealed a shifting culture. While Moimango had been propped up in a bamboo chair, other nearby remains were placed on benches and chairs or within baskets.

Some were laid to rest in coffins but not buried. When the Anga first began to place their dead in coffins, Beckett found, they still were concerned with the consequences of burial methods. “They felt the ground would get hungry for blood and wouldn’t provide for them if they buried them,” Beckett says.

This changed over time, but Beckett noticed tensions between Anga who had converted to Christianity and buried their dead versus traditionalists like Gemtasu. The latter were loath to watch their cultural heritage vanish, and Gemtasu hoped that drawing attention from international experts like Beckett would help legitimize the practice among his own people.

The mummies’ placement was also likely important to community members, as the cliff overlooked the valley where Koke was found. This provided an opportunity to mark territory for living relatives of the deceased, according to Nelson’s interviews with the Anga people.

Moimango was brought down from the cliff in 2010 so that researchers could assess restoration efforts from two years earlier. (Credit: Ron Beckett)

Moimango was the last village member to be mummified, and Gemtasu scarcely remembered the process — he was only 10 years old when he aided with his father’s mummification. Still, some villagers have kept the basic technique alive under Gemtasu’s guidance by occasionally mummifying a wild boar that’s then placed on a chair. Lohmann and Beckett participated and recorded the process of restoring Moimango’s mummy in 2008.

The researchers also assisted community members in practicing on a forest boar. “They build a smoking chair, and they position the body in this chair over the smoldering fire,” says Nelson, who accompanied Beckett on a subsequent trip in 2010 to further study the process and see how Moimango’s restoration held up. On the follow-up trip, the team carefully analyzed a pig mummification and talked to several generations of Anga to learn more about mummification and other important cultural practices.

They watched as the Anga people massaged the skin and rubbed it with leaves with alkaline properties. These bristly leaves help open up the pores, Beckett adds, and eliminate some moisture retained inside the corpse. The smoke also keeps insects away and creates a situation unfavorable for much of the bacteria usually involved in the decomposition process. They also poke bamboo shoots into parts of the body to help leak more fluid. All in all, the technique might take a month or more.

Beckett says this is similar to Egyptian mummification only in that they use local ingredients. The Anga don’t remove the organs during the process — at least not recently.

During his 2010 expedition, Nelson found mummies positioned in a tin shed in the village of Oiwa (Credit: Andrew Nelson)

The researchers also learned that some neighboring villages conducted a similar process. For years, some mummified corpses from the remains of people from a nearby community (who had been killed in vengeance for murder) were kept in a hut by the side of a road as a tourist attraction of sorts. The remains had exchanged hands several times until they ended up in a tin shed.

This environment seemed to shelter the remains more effectively than those in Koke, Beckett says — these particular mummies were in better condition than Moimango’s was.  “The mummification process was actually very good as long it wasn’t assaulted by the environment,” Beckett says.

After reviving the tradition, Gemtasu died in 2015 and was subsequently mummified. Nelson says Gemtasu will likely be the last of the Anga to receive this treatment. “My guess is probably that that’s the end of it,” he says. “Those sorts of traditional ways, just like they are everywhere, are getting lost.”

Yet Gemtasu was able to rekindle interest in mummification, for a time at least, by seeking to attract international experts. It’s also possible that more remote villages deeper in the forest may still practice mummification, Nelson and Beckett say.

But in some ways, the intention behind the practice is still satisfied in new forms. Rather than observing the mummified faces of their dead relatives, Nelson says that many villagers set photographs of the deceased on the tombstone after burying them. “It gives you an appreciation for culture diversity, the different ways that people think about death,” Nelson says.