The Largest Volcano in Alaska gets New Monitoring 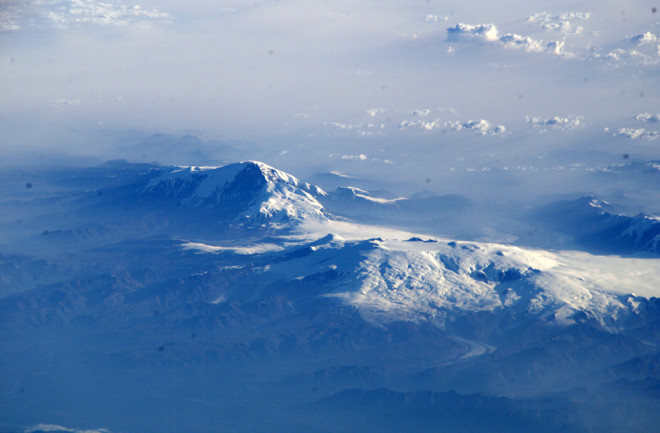 Wrangell and its ice-filled caldera seen from the International Space Station in August 2005. (Credit: NASA)

Alaska is full of volcanoes. Most of them lie along the long, arcuate chain along the Alaska Peninsula and Aleutian Islands, stretching far into the Pacific Ocean. However, they are not the only volcanoes in the vast state. to the east of the Aleutian arc are the Wrangell-St. Elias Range. It is one of the most complex tectonic area in North America and home to at least 10 volcanoes. In fact, some of the largest eruptions in the past 10,000 years come from the Wrangell-St. Elias range.

Why bring this up now? Well, the Alaska Volcano Observatory announced the installation of a new pair of seismometers for Wrangell. It is the most active volcano in the Wrangell-St. Elias Range, most recently erupting in 1912. We now have the ability to watch for signs of new eruptions from Wrangell.

Wrangell is big. The shield volcano is over 30 kilometers across and hosts multiple nested calderas at its summit. Some of these are formed from potential large explosive eruptions in the volcano’s past, others may have been formed by a more gradual collapse like we saw at Hawaii’s Kīlauea last summer. It has also produced lava flows that travelled almost 60 kilometers from their source!

The volcanoes of the Wrangell-St. Elias Range in Alaska. From Richter and others (1995) – USGS Bulletin 2072.

Now, Wrangell’s remote location means we don’t have a lot of good data on the historical activity from the volcano. It is clear that it last erupted in 1912 (or 1930, depending on the source), although that doesn’t mean it didn’t have small blasts since then. On top of this, around 190 AD the volcano produced a VEI 4 eruption.

There are some indications that Wrangell has been warming since the 1964 Alaska earthquake. There have been a number of ice melt events , suggesting that the ice cap on the volcano has melted due to heat from magma inside the volcano. However, without much in the way of monitoring before now, we just didn’t know if magma could be moving under Wrangell.

Some other volcanoes in the Wrangell-St. Elias range that could be potentially active include Drum and Sanford, both of which may have erupted a few hundred thousand years ago.

One of my favorite eruption (well, pair of eruptions) is the White River Ash. It is two lobes of ash and pumice that may have been some of the most powerful explosive eruptions on Earth in the past 10,000 years. There has been some debate about its source, but it is likely Churchill. These two blasts occurred in ~847 and 60 AD, so northern Canada and Alaska were definitely settled by humans.

AVO also announced new seismometers for Dutton on the Alaska Peninsula, adding to the volcano monitoring for America’s most volcanically-active state.