The Human Brain Has been Getting Smaller Since the Stone Age 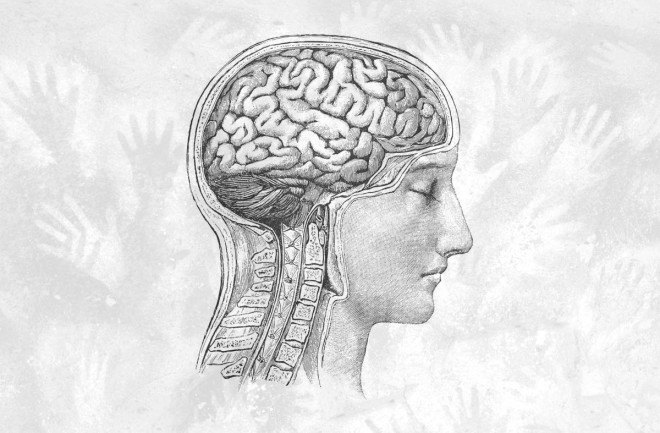 I don’t mean to alarm you, but the average human brain size is shrinking. And we can’t blame reality T.V. or Twitter.

No, this decline began tens of thousands of years ago. It’s something of a well-known secret among anthropologists: Based on measurements of skulls, the average brain volume of Homo sapiens has reportedly decreased by roughly 10 percent in the past 40,000 years. This reduction is a reversal of the trend of cranial expansion, which had been occurring in human evolution for millions of years prior (see chapter 17).

Let’s review the boney evidence backing this observation, then explore some potential explanations. And just to ease your anxiety: Although you may have a smaller cranium than our Stone Age predecessors, human brains today are still about three times the size that's normal for a primate with our body weight.

The Rise and Fall of Cranial Capacity

Since brains don't last long after death, anthropologists have to infer insights into our neurological evolution from fossilized skulls. As a proxy for brain size and sophistication, they measure endocranial volume, the amount of space within the skull. This value was not exceptional for the earliest hominins over 4 million years ago. The oldest skulls thought to represent human ancestors (Sahelanthropus, Ardipithecus) pack in roughly 1.5 cups (350 milliliters), commensurate with living chimpanzees.

But after this period, brain expansion became a defining feature of our lineage. From around 4 million to roughly 2 million years ago, the Australopith species (Lucy and her contemporaries) approached 2 cups (500 mL). By 1 million years ago, some Homo erectus exceeded 4 cups (1,000 mL). And average cranial capacity reached nearly 6 cups around 130,000 years ago in both Neanderthals (with specimens ranging from 1,172 to 1,740 mL) and Homo sapiens (1,090 to 1,175 mL). It's also worth noting that our stature hasn’t changed substantially since Homo erectus times, so much of this brain expansion happened independent of body size growth.

How do recent humans compare? Based on measurements from 122 populations, modern adult brains range from 900 to 2,100 mL, with a global average of 1,349 mL, which is smaller than our Stone Age predecessors. However, we can’t reach meaningful conclusions from these species-wide global averages, in part because methods of skull measurement differ between datasets.

More convincing evidence for cranial decline comes from studies that applied the same measuring technique to hundreds or even thousands of skulls from a particular region across the millennia. For instance, a 1988 Human Biology paper analyzed more than 12,000 Homo sapiens crania from Europe and North African. It showed cranial capacity decreased in the past 10,000 years by about 10 percent (157 mL) in males and 17 percent (261 mL) in females. A similar reduction was found among skulls from elsewhere on the planet, including sub-Saharan Africa, East Asia and Australia.

Roughly 8,000 years ago, humans carved depictions what are believed to be hunting and deities into the walls of Magura Cave in Bulgaria. (Credit: Vislupus/Wikimedia Commons)

From every region with data, there seems to have been a roughly half cup decrease in endocranial volume that began when the Ice Age gave way to the Holocene, the most recent geological epoch, which is characterized by a comfortable, stable climate. Since this pattern was first noticed in the late 1980s, researchers have proposed a number of possible explanations.

Some say the decrease came from from a slight reduction in body size and robustness, related to the warmer conditions of the Holocene. Bigger bodies were better during the Ice Age, and then became disadvantageous as the climate warmed. But anthropologist John Hawks has countered this idea by showing that the documented brain reduction is too great to be explained by simply having slightly smaller bodies.

Other researchers point to the fact that brains are energetically costly organs. Though the modern human brain is only 2 percent of our body weight, it consumes almost one quarter our energy input. By inventing ways to store information externally — cave art, writing, digital media — humans were able to shed some brain bulk, according to one proposal.

But perhaps the most convincing hypothesis is that Homo sapiens underwent self-domestication, a proposal that stems from our understanding of animal domestication. Sheep, dogs and other domesticated species differ from their wild ancestors by a number of physical and behavioral traits. These include tameness, reduced timidity, juvenile appearance into adulthood and smaller brains.

Research has shown these traits, collectively known as the domestication syndrome, are influenced by the same hormones and genes. Humans selectively bred animals with these desirable features, creating today’s pets and livestock. The self-domestication hypothesis — or what anthropologist Brian Hare called “survival of the friendliest” — suggests we also did this to ourselves.

The idea is, within Stone Age societies, cooperative, level-headed individuals were more likely to survive and reproduce than combative, aggressive ones. Those pro- or anti-social inclinations were influenced by genes regulating hormones, which also affected physical traits, including body and brain size. Over time, “survival of the friendliest” led to humans with slighter builds and brains on average. So although there was a reduction in skull size — and possibly intelligence — human cooperation grew, cultivating greater collective wisdom. A few social smaller brains can surely outwit one lonely large noggin.