The Hidden Volcanoes of Central Oregon 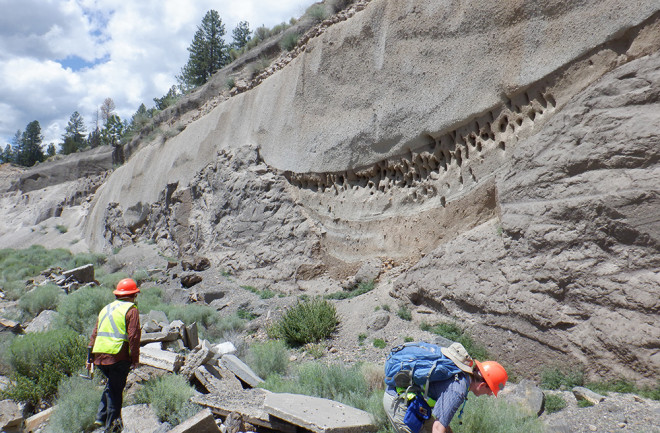 Earlier this month, I spent a little over a week exploring one of the biggest mysteries in then Cascade Range. It’s a string of volcanoes spanning from Northern California into British Columbia and host to such well-known peaks as Mount St. Helens, Hood and Shasta. Yet, some of the largest eruptions over the past million years in the Cascades may have come from volcanoes that are totally hidden from view today. One of those mystery volcanoes is the Tumalo Volcanic Center.

I’ve been fascinated by the TVC since I was in graduate school. We would take field trips from Oregon State University to visit the area around Bend in central Oregon. If you’ve never been to Bend, you’re missing a true volcanic wonderland. The city is built on layer after layer of volcanic rock that goes back millions of years.

Some of the volcanic features are very young (geologically-speaking), having formed in the past few thousand years. This includes basaltic and rhyolite lava from Newberry, steep cinder cones like Mt. Bachelor and sticky rhyolite domes like the Devil’s Hills along with the ash and pumice from the TVC.

This project in the TVC is part a National Science Foundation grant that was awarded to me and Adam Kent (Oregon State University) to pick apart, date and unravel the processes that formed the massive explosive eruptions (and smaller stuff). We looked at a lot of volcanic material over our field work, but right now, I’m going to focus on some cool stuff we saw in the Oregon State University Cascades campus pumice quarry.

An annotated image of one of the walls in the OSU-C quarry. The three main TVC units seen are the Desert Spring Tuff, Bend Pumice and Tumalo Tuff. The only one missing is the Shevlin Park Tuff. (Credit: Erik Klemetti)

The wall pictured above captures three of the “big 4” eruption deposits from the TVC. The oldest we know of is the Desert Spring Tuff (at the bottom). It is pretty tough because it has become partially welded, which is what happens when the volcanic glass remelts after the ash and debris lands on the ground.

Above that (thus younger) are the Bend Pumice and Tumalo Tuff. These two might be consecutive eruptions — a one-two punch of a big pumice fall followed by pyroclastic flows. Image a tall ash plume from a massive explosive eruption that rained pumice across the landscape and then a collapse, sending searing flows of pumice, ash and debris away from the volcano.

Both units are pretty loose unlike the Desert Spring Tuff. You can walk up to the Bend Pumice and pluck individual pumice chunks right out. You can see a close up of some of the pumice from a smaller pumice fall below the Bend Pumice (also seen on the image above). These might be little blasts that preceded the Bend Pumice by days, weeks or more. In the Bend Pumice, the pumice changes sizes as well and this recorded how the force of the eruption might have changed over the its duration.

Layers of pumice in the Bend Pumice, each potentially marking a pulse of the main eruption or blasts that happened before the main event. (Credit: Erik Klemetti)

A few details to note: You might notice the top of the Tumalo Tuff (above) looks less like a pile of rubble. That’s because it may have been altered by vapor percolating through the ash and pumice, “gluing” it together into a wall. Also, at the bottom of the Tumalo Tuff is a lag deposit made of larger chunks of pumice that may have been deposited as a pyroclastic flow slowed down.

The pumice erupted from the TVC actually did have some real monetary value. Pumice was and is mined from various locations around Bend for decades as an abrasive and some of the rocks that might be part of the TVC were also used a good, local building stone. One of these quarries is now part of the OSU-C campus, but as the school grows, they need more land, so the quarry is going to be mostly filled to make way for new structures.

This is just a taste of the Tumalo Volcano Center and over the next few years, we hope to find out a lot more about this hidden volcano in Central Oregon. Although the likelihood of it reawakening is very small, it is never a bad idea to understand the volcanic history of a region growing as fast as Deschutes County and Bend.