The Glorious Twilight of Pterosaurs 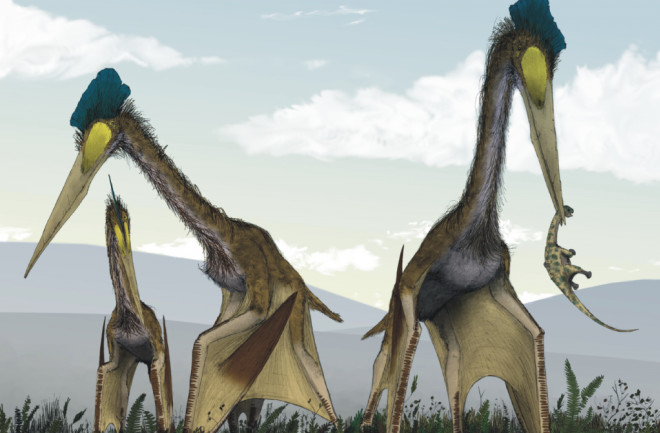 Pterosaurs were more successful, evolutionarily speaking, than once believed, and were in their prime when done in by the same mass extinction that claimed the non-avian dinosaurs. (Credit Witton MP, Naish D (2008) A Reappraisal of Azhdarchid Pterosaur Functional Morphology and Paleoecology. PLoS ONE 3(5): e2271. doi:10.1371/journal.pone.0002271) While dinosaurs have a healthy hold on our imagination, their sky-sailing relatives the pterosaurs don't get nearly as much attention as they should. Maybe that's because researchers thought the flying reptiles were already declining in numbers and diversity well before the infamous End-Cretaceous mass extinction. New research out today says hold on: It appears pterosaurs were actually enjoying a heyday 66 million or so years ago, when a space rock and massive volcanic activity created a Very Bad Time for life on Earth. First things first: Pterosaurs were notdinosaurs. But they were related, as part of the same larger archosaur family tree that today includes crocodiles and the surviving dinosaurs, birds. The first vertebrates to achieve powered flight, the pterosaurs did so in a way different from birds or bats: They used a sail-like membrane attached to a single super-sized finger. That may sound like a less than robust approach to winging it. But it sure worked out for the pterosaurs, some of which were the largest animals ever to take to the skies, such as Quetzalcoatlus northropi, with a wingspan of 35-feet-plus, and a similarly-sized giant from Mongolia described just last year. The animals were capable of both gliding and flapping and, when not in the air, they walked around on all fours like winged and beaked giraffes — only decidedly less herbivorous. Based on the fossil record, paleontologists had believed that pterosaurs emerged more than 200 million years ago, grew in diversity to exploit different environments and ecological niches, and then began a slow decline around 90 million years ago. By the End-Cretaceous mass extinction event of about 66 million years ago, the flying reptiles were already pretty much finished, with only a single family represented in the fossil record just before the big die-off. Or so researchers thought. Not So Fast A study out today, introducing a new cache of hundreds of pterosaur fossils from Morocco, suggests a different story. Researchers identified bones from at least seven different species — six of them new to science — and three different families, more than tripling the diversity of the animals alive at the very end of the Cretaceous. (The fossils are from the Upper Maastrichtian Age, within 3-4 million years of the mass extinction that closed down the Cretaceous Period.) In addition to the number of different animals found, their range of sizes, with wingspans from about 6 to 30 feet, and shapes, including beak length and wing-to-body proportions, suggests healthy ecological diversity among pterosaurs even in what was their final hour, geologically speaking. It's important to understand today's find within the larger context of pterosaur fossils, which in general are rare. Blame their hugely successful adaptation for flight: Their bones were super lightweight, thin-walled and hollow. That's great for flying but awful for preservation. For years, some paleontologists have argued that the apparent gradual demise of the pterosaurs was an unintentional fiction created by the lack of fossil finds.

Pterosaurs from Morocco, including these fossils, are changing our view of the end days of these fantastic animals. The upper image of a partial jaw belonged to Alcione elainus, while the lower image is part of the forearm bone of a giant pterosaur (species tentatively identified as Arambourgiania), which would have had a wingspan three times that of Alcione (note different scales in images). (Credit pbio.2001663)Lipps Service In the introduction in today's study, the researchers note the Signor-Lipps Effect likely plays a role in what we thought we knew about pterosaur extinction. The principle holds that because the fossil record is never complete, the most recent fossil you find of an animal is not the last actual example of its kind, and that species extinction occurred after that individual's death. The Signor-Lipps Effect can make a sudden mass extinction appear like a gradual decline and is particularly strong for organisms with a poor fossil record, such as the pterosaurs. The moral of the story is that science is not carved in stone but rather constantly revising and refining itself with every new discovery; the fossil record and our understanding of it continues to evolve, no pun intended (okay, maybe just a little intended). And bonus: We have new species of pterosaur to get giddy about. As we should. If you've got a hankering to see more of the fossils and read about the species identified in today's study, go for it. The paper is open-access and appears in PLOS Biology.

Pterosaurs are at least as cool as their fellow archosaurs, the dinosaurs, and humans should, ah, look up to them more. An Azhdarchid pterosaur measures up to what appears to be Benedict Cumberbatch in this 2015 illustration. (Credit Witton, M. P., & Naish, D. (2015). Azhdarchid pterosaurs: water-trawling pelican mimics or “terrestrial stalkers”?. Acta Palaeontologica Polonica, 60(3), 651-660)