The Furry Ecosystem of Algae, Moths and Sloth Feces

Biologists puzzle over the fact that sloths descend from their trees to poop. The behavior might support a rare mutualism with algae and moths that live in the creatures' fur. 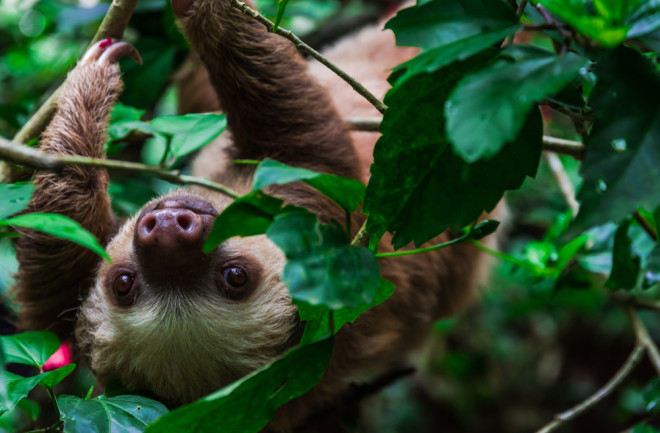 Humans generally don’t like it when things grow on them, whether it’s a bacterial infection, a cancerous tumor, or, for parents, the latest Cocomelon song. But it’s a different story for our mammalian relative the sloth; not only do sloths not mind things growing on them, they actively encourage it in one of the most striking mutualisms known to biology.

A mutualism is a type of symbiotic relationship where both partners benefit. A classic example of a mutualism is the relationship between plants and their pollinators. The pollinators receive a source of food, like a bee collecting nectar from a flower, while the plants get their pollen transferred from one individual to another, which facilitates reproduction. Though it’s common to think of mutualisms as involving only two parties, a world with an estimated 8.7 million species gets more complicated than that (lichen lovers are intimately aware of this fact already).

It turns out that the humble sloth is at the center of a fascinating three-way mutualism, one that connects with a puzzling aspect of their behavior — they spend almost their entire lives in trees, but venture down to the ground to poop. Sloths are closely related to anteaters, but are much slower than their insectivorous cousins; a typical sloth takes a full minute to move only 15 feet. Their lethargy makes them vulnerable to predators, especially when taking a bathroom break on the forest floor. So, why do they do it? You could say it comes down to that old proverb: A rolling stone gathers no moss.

Sloths move so slowly that tons of organisms, including beetles, cockroaches, fungi and algae live on them. One species of green algae in particular lives nowhere else on earth except in the fuzzy comfort of sloth fur. These algae provide a portable food source for sloths, who happily dine on their microscopic stowaways. But while the sloths provide a hirsute home, the algae also need nutrients in order to survive. That’s where another resident of Slothtown swoops in: moths.

Specifically, we’re talking about pyralid moths in the genus Cryptoses. These are “largely flightless moths that live in the fur of both two-toed and three-toed sloths,” says Jonathan Pauli, an associate professor of wildlife ecology at University of Wisconsin-Madison. “The moths will lay their eggs in sloth dung, and the moth larvae … are coprophagous, they eat sloth poo.”

Once the larvae mature, they fly up to the forest canopy to colonize a sloth, and the cycle continues. Sloths pooping on the ground allows the moths in their fur to get close to the feces, which is vital to continue their lifecycle. Given that the moths spend their entire adult lives in sloth fur and aren't strong fliers, it would be difficult for a moth to successfully locate and lay eggs in sloth poop if it was falling from trees to the ground far below. But why would sloths help out the moths like this? Just because their names rhyme? Surely there’s more to it.

“The moth lifecycle is really dependent on the sloth for survival,” says Pauli. “The moths ultimately die within the fur of these sloths.” Once the moths die, a “host of decomposers that occur within sloth fur” break down their bodies. In a sense, this creates sloth fertilizer, Pauli says with a laugh.

Studies have shown that the more moths living in sloth fur, the more nutrients — or “fertilizer” — that can be found there as well, which leads to more tasty algae. “There appears to be this three-way mutualism between moths, algae and the sloth,” Pauli says. Risking being eaten by predators in order to facilitate this multi-partner relationship may just be worth it for the sloths.

Though the exact evolutionary trajectory of sloth defecation behavior remains mysterious (and some poo-poo the idea it has anything to do with the moths at all), “there does appear to be these positive relationships among a risky behavior with the intersection of other lifecycles,” Pauli says. And it’s worth noting that this mutualistic, mobile ecosystem is hardly the only interesting thing about sloths.

While some early biologists, including the famous Comte de Buffon, thought of sloths as wretched creatures, we now recognize that they possess a fascinating suite of traits that make them perfectly adapted to their unique arboreal lifestyle.

“The body of work that we’ve put together shows that there are a lot of really fascinating phenotypes associated with these species,” Pauli says. This includes their long arms, “having the lowest metabolic rate of any mammal recorded,” and “incredibly strong polygyny,” such that most reproduction is done by a small number of individual sloths. All of their weird and wonderful traits are adaptations that enable them to exploit their environment in a way that no other animal can.

Sloths have been maligned throughout history, with their name becoming synonymous with laziness (and even labeled a deadly sin). But at the end of the day, there’s nothing lazy about sloths. They’re moving at their own pace, in tune with their well-adapted bodies, which enables them to thrive in a difficult habitat. Rather than fear being like a sloth, maybe it’s what we should all aspire to. Just don’t let algae or moths live on you if you still want to have human friends.