The FOXP2 story in New Scientist 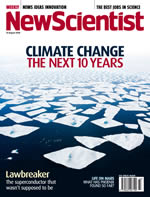 Hey folks, I've got a feature article in this week's New Scientist, which is my second for the magazine. The article describes the story of FOXP2, the "language gene" that's not really a language gene.

The story started a few years ago, when a group of scientists led by Simon Fisher found that a single genetic mutation was responsible for an inherited language disorder in a British family called KE. The gene in question - FOXP2 - was quickly touted as a "gene for language" by an overenthusiastic and sensationalist media.

Since then, researchers have probed the true nature of FOXP2 using disciplines from evolutionary biology to neuroscience to genetics, and species including humans, mice, finches and bats. And amid this growing body of surprising results, it's now clear that the "language gene" epithet is far too simplistic.

FOXP2 is hardly a unique human innovation; it's found in a huge variety of other animals. Nor has it changed beyond all recognition in our genome; instead it is incredibly heavily conserved, with the human and chimpanzee versions bearing only two small differences. It's role is not specific to language, nor even to communicaiton in general; it's probably part of an ancient system involved in learning and producing complex patterns of movement.

It's a really interesting body of work, and definitely the most difficult thing I've had to write so far. It was an attempt to debunk a lot of the nonsense surrounding the gene, and I'm very pleased with how it turned out. I even had the chance to interview Simon Fisher, who led the team who first identified FOXP2, and Svante Paabo, who's done a lot of the work on mice (and Neanderthals!).

Here's the start and end of the piece. For the middle, you need access to New Scientist. Or you could email me and I'll send you a sneaky copy ;-)

IMAGINE an orchestra full of eager musicians which, thanks to an incompetent conductor, produces nothing more than an unrelieved cacophony. You're starting to appreciate the problem faced by a British family known as KE. About half of its members have severe difficulties with language. They have trouble with grammar, writing and comprehension, but above all they find it hard to coordinate the complex sequences of face and mouth movements necessary for fluid speech. Thanks to a single genetic mutation, the conductor cannot conduct, and the result is linguistic chaos. In 2001, geneticists looking for the root of the problem tracked it down to a mutation in a gene they named FOXP2. Normally, FOXP2 coordinates the expression of other genes, but in affected members of the KE family, it was broken.

It had long been suspected that language has some basis in genetics, but this was the first time that a specific gene had been implicated in a speech and language disorder. Overeager journalists quickly dubbed FOXP2 "the language gene" or the "grammar gene". Noting that complex language is a characteristically human trait, some even speculated that FOXP2 might account for our unique position in the animal kingdom. Scientists were less gushing but equally excited - the discovery sparked a frenzy of research aiming to uncover the gene's role.

Several years on, and it is clear that talk of a "language gene" was premature and simplistic. Nevertheless, FOXP2 tells an intriguing story. "When we were first looking for the gene, people were saying that it would be specific to humans since it was involved in language," recalls Simon Fisher at the University of Oxford, who was part of the team that identified FOXP2 in the KE family. In fact, the gene evolved before the dinosaurs and is still found in many animals today: species from birds to bats to bees have their own versions, many of which are remarkably similar to ours. "It gives us a really important lesson," says Fisher. "Speech and language didn't just pop up out of nowhere. They're built on very highly conserved and evolutionarily ancient pathways."

The FOXP2 story has already taught us important lessons about evolution and our place in the natural world. It shows that our much vaunted linguistic skills are more the result of genetic redeployment than out-and-out innovation. It seems that a quest to understand how we stand apart from other animals is instead leading to a deeper appreciation of what unites us.