The Flesh of Physics

Our bodies are bunches of atoms, and like any rock or star or other bunch of atoms, we have to obey the laws of physics as we move. But each species obeys those same laws in its own way. My cat leaps onto my desk most mornings, his grace unblemished by the paper clips and computer cables he kicks onto the floor. A maple tree outside bends in the wind, a happy medium between flopping over and snapping in two. A hawk arrives at the tree and lands precisely on a branch.

On their own, our eyes cannot tell us much about the different ways in which living things move. We can't see the invisible vortices of air spiraling behind a hawk, the stresses experienced by different parts of the leaning maple, the thrust and torque generated by my cat as he rises into the air.

The first glimpse into this invisible world came in 1872. Leland Stanford, a railroad tycoon and the founder of Stanford University, spent a lot of time watching his race horses run. He was sure that when they trotted, there were moments when all four legs left the ground. Legend has it that he even bet $25,000 that they did. Stanford paid a famed landscape photographer named Eadweard Muybridge to find out if he was right.

Muybridge had horses trot down a path strung with threads connected to a row of cameras; when the horses snapped the threads, the cameras snapped the pictures. It took Muybridge years to perfect a shutter fast enough and film sensitive enough to capture the images (he also needed some time off to defend himself — successfully — against the charge that he had murdered his wife's lover).

But in 1877 he was finally able to give Stanford his answer. Horses do indeed bring all their legs off the ground during each cycle of a gallop. Later, Muybridge built contraptions that could display his pictures in quick succession. His moving pictures brought the horses back to life.

Eventually Muybridge made his way to the University of Pennsylvania, where he photographed many other four-legged animals. He found that whenever they ran, they lifted all their legs off the ground at once. Even two-legged humans did. That complete lack of contact with the ground, in fact, came to define the act of running.

Muybridge's photographs also revealed other rules. When four-legged animals walk rather than run, their feet usually hit the ground in the same pattern: hind left, front left, hind right, front right. Here's a diagram of the cycle in a walking horse. 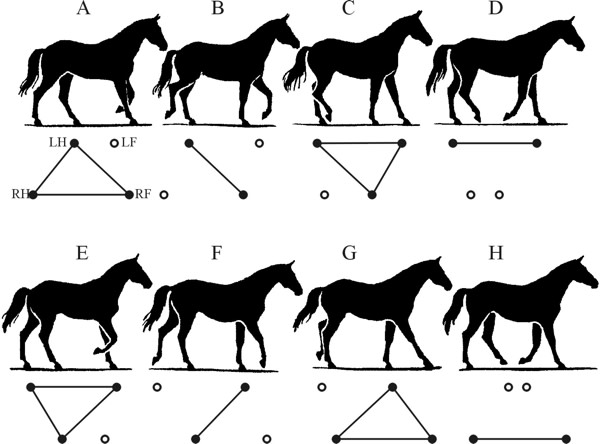 Muybridge opened the way to the scientific study of life in motion. These days, biologists can film animals with high definition video cameras and use computers to calculate the speed and direction in which different body parts move. They can put sensors on animals or have them run over force-sensitive plates to measure the thrust they generate with their muscles.

Instead of Muybridge's flickering photographs of horses, we can enjoy their glacial grace in movies like this, from researchers at the Royal Veterinary College:

These superior tools have allowed scientists to discover some of reasons that animals move the way they do. The cycle of footfalls in a walking dog or a walking elephant, for example, is the best way to keep a four-legged animal stable. Walking is not just stable, but also efficient, because it turns animals, in effect, into pendulums. A pendulum can swing for such a long time because it continually recovers some of its energy. On its downward stroke, it's powered by the force of gravity; when it reaches the lowest point of its arc it has so much energy that it can counteract gravity and swing upward.

When you walk, your body behaves like an upside-down pendulum: the foot you plant in front of you is the pendulum's axis, your center of mass the hanging weight. In the beginning of your stride you work against gravity, vaulting your center of mass upward with your leg until you reach your highest point. Gravity then takes over, and your body swings downward until your other leg hits the ground. The next stride is even easier. You can use the energy given to you by gravity to vault yourself into your second and all successive steps, just as a pendulum reclaims its energy in each swing.

When you run, however, you stop behaving so much like a pendulum and begin behaving more like a pogo stick. Now when you first plant your leg, your body sinks down on it instead of rising up. Your leg actually acts as a brake for your body, and so your center of mass is at its lowest point when your acceleration is lowest. Meanwhile your tendons are acting as springs. As they stretch and snap back, they store and release energy, just like the spring in a pogo stick, and propel you upward and forward.

There are many other ways to move around, of course. If you're a cockroach or a centipede, you can use more than four legs. It turns out that many of the same rules that govern walking and running among us vertebrates also apply to invertebrates. Meanwhile, other researchers are discovering the rules behind other kinds of motion, like flying, jumping, and swimming. For all the advances in biomechanics, however, it turns out that a lot of people still live in a pre-Muybridge universe. A team of biologists, biophysicists, and a veterinarian in Hungary recently did a survey of the depictions of animals in museum displays and other places. In each case, the researchers determined whether the poses of the animals followed the basic rules for how four-legged creatures move.

Here, for example, is an illustration of a horse not being a horse. B is a diagram showing its limbs. C and D show two real poses it could have taken. 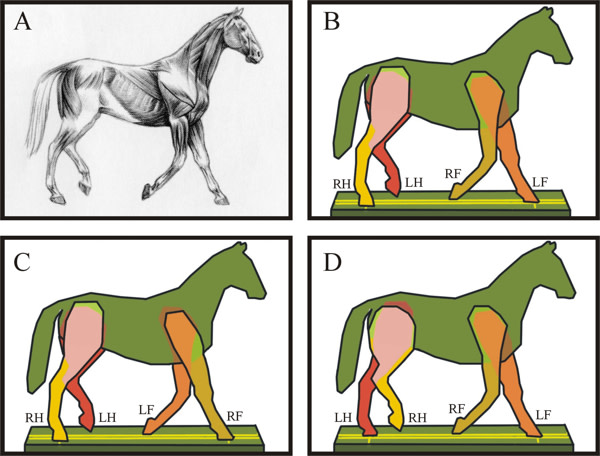 And here's a picture of an aardwolf in a museum display doing what no self-respecting aardwolf would do. 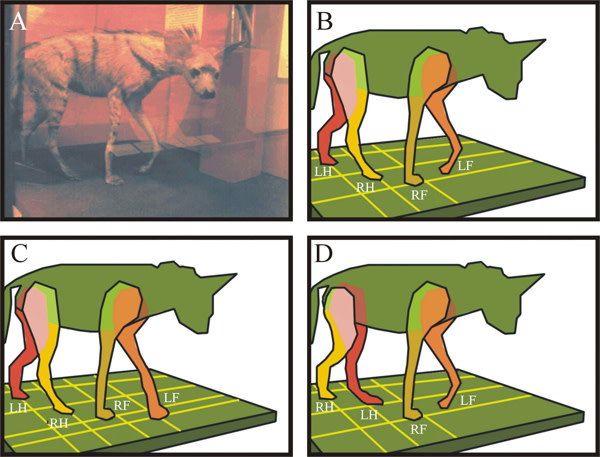 I was surprised that there are so many biomechanical mistakes out there, especially on such a simple matter of how to position an animal's legs. To be fair, a lot of the biomechanical misktakes in museums are baggage they carry from the past. Today museums are following Hollywood's lead and are working with biomechanics experts. John Hutchinson of the Royal Veterinary College has done some pioneering work on how dinosaurs walked, and his research is the basis of an exhibit called Be The Dinosaur. Here's a sample of the computer simulations the exhibit has to offer.

I first became fascinated with biomechanics in the mid-1990s, and I often dreamed of embedding movies on the pages of my articles. Words could only go so far, and photographs couldn't go that much further. Most of my futuristic dreams have not come to pass, or have proven to be banal disappointments. But when it comes to writing about biomechanics, the future is here, and it is good. This will be the first of what I hope is a long line of blog posts about life in motion, illustrated with moving images that Muybridge could not imagine.