The Fish That Climbs Waterfalls With Its Mouth 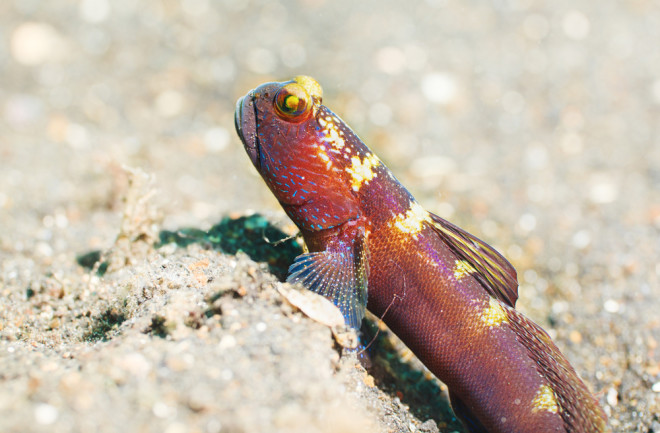 Hawaii's environmental extremes (read: a series of active volcanic islands isolated in the middle of the ocean) make it a hotbed of novel evolutionary adaptations. Take goby fish in the genus Sicyopterus, for example. These lowly little bottom-feeders spend their days sucking algae off the rocks of stream beds. But that same sucking mechanism also allows the fish to climb up waterfalls over 300 feet tall.

The question is how these two activities are related. The researchers say it may be an example of exaptation, which describes the situation when a trait evolves for one reason, but eventually serves another purpose. Feathers, for example, are thought to have originally evolved to keep birds warm, but then later became a means for these creatures to fly.

In the case of the goby fish, its sucker mouth may have originated as a feeding mechanism, but later became a mode of locomotion as well. Or perhaps the other way around.

Researchers can't pin down the evolutionary precursor from their study, which was published in PLOS One last week. Goby fish lay their eggs in freshwater streams, and once they hatch, the tiny gobies are swept out to sea. Here the fish mature without threats of lava flows, hurricanes or flash floods. Gobies spend their lives climbing back up streams and over waterfalls to start the process over again.

Most goby species accomplish this feat with a sucker on their stomachs, but those in the Sicyopterus genus inch their way up the vertical rocks by alternating between their stomach sucker and their mouth. Researchers studied the specific movements of the mouth involved in eating and waterfall-climbing and found that the two behaviors were closely related. Even if scientists can't pin down which came first, the fact that this fish can suck its way up a waterfall is still pretty fun to watch.