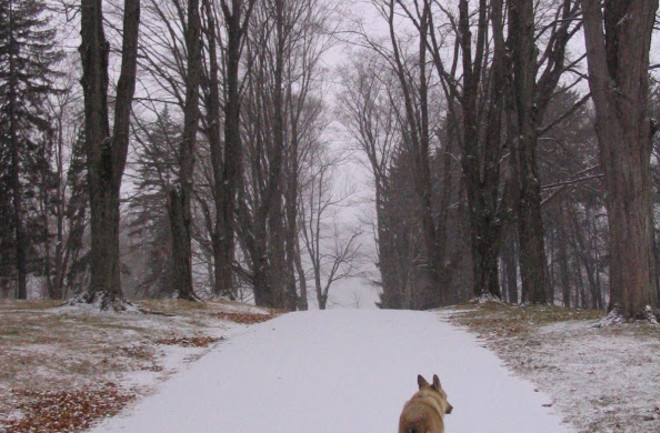 The dog has walked beside humans longer than any other animal, but science has only recently begun to understand how domestication occurred. (Credit: G. Tarlach) Who's a good dog? The very first dogs, apparently, as a new genetic study reveals the sequence of events, begun thousands of years ago, that morphed wild wolves into (eventually) couchwarmers and ball catchers. If you wrote a book about animal domestication, the story of turning wolves into dogs would arguably deserve the biggest chapter. For starters, all archaeological and genetic evidence suggests dogs were the first domesticated animals, and the only ones before the advent of agriculture. Researchers digging into those past events (it seems likely they were domesticated more than once, in more than one place) are also approaching the topic collaboratively, which is speeding results. And many dog owners have proven ready to help, allowing saliva samples from their pets to be used to build ever-larger databases of doggie DNA for analysis. So far we know that Eurasian gray wolves were domesticated into dogs more than 10,000 years ago, and possibly as early as 40,000 years ago. But the big questions — how, why and exactly where — remain open to debate. A leading theory about how this happened is that wolves were selected for specific behavioral traits which, over time, led to changes in physical traits as well. And new research out today appears to both confirm that hypothesis and explain why. Tame Time Before we go further, a couple things to keep in mind. When it comes to dogs, saying things like "selected for specific traits" probably brings to mind a lot of the features, mostly originating in the 18th-20th centuries, that we associate with modern purebreds, from the shortened snout of pugs to the water-resistant coats of many hunting breeds. These traits were actively selected for by fanciers and breeders. Back in the pre-Neolithic, however, the idea of selecting wolves for specific traits was a different affair. Imagine, theoretically, hunter-gatherers sharing a kill over a fire one night, and the next morning packing up and moving on, leaving perhaps a scrap of offal behind in the ashes. Now picture a wolf that dared to venture close to the human-scented remains of the fire to score that scrap, eat it and maybe start following the band of humans instead of actively avoiding them as most of its species would do. We could say that wolf was selected for the behavioral trait of reduced fear of humans, even though no human did any active selecting. This may all seem kind of obvious. Of course the average hunter-gatherer is going to prioritize having a wolf-dog with certain behaviors, like, say, not eating the children, over one with spots. Obviously, you may be thinking, behavior came before looks. After all, there was that famous Russian experiment where Dmitry Belyaev bred foxes for tameness and, over decades, the animals' appearances completely changed. Yes, that's all true, but the actual mechanics of it all, on a cellular level, have remained largely mysterious. Today's paper helps to explain what's going on at that micro-level. My, What Big Eyes You Have Dogs, like Belyaev's foxes and most other domesticated animals, exhibit a suite of traits — both physical and behavioral — generally called domestication syndrome. These traits include tameness, floppy ears, smaller jaws and teeth, reduced pigmentation of skin and fur, a smaller brain and, often, larger eyes relative to the rest of the face. Ever since Charles Darwin first noted the syndrome, scientists have been trying to understand why this occurs.

Domestication of the dog involved selecting for tameness, bowtie optional. Floppy ears just came with the territory, for reasons researchers are now able to understand. (Credit: G. Tarlach) In the past few years, geneticists and evolutionary biologists have focused on neural crest cells (NCCs) as the catalysts for domestication syndrome. NCCs are stem cells found in every embryo that show up first at the crest, or top edge, of the neural tube, which will eventually become the brain and spinal cord. As the embryo develops, a number of different genes signal NCCs to activate and move, along specific paths, to different areas of the body to perform different tasks. The range of activities that NCCs do is enormous: the adrenal and pituitary systems, which are involved in aggression, fear and other behaviors, are derived from NCCs, but these cells are also involved in regulating physical traits such as pigmentation of skin and hair. It Takes A Village (Dog) The team behind today's research analyzed tiny pieces of DNA taken from different locations within entire genomes of ten wolves and 43 village dogs from four different continents. Using village dogs is key here: These semi-feral animals live in and around villages in much of the world but are not actively bred by humans, so they are generally free of the genetic bottlenecks created by fanciers who actively manipulate bloodlines for specific traits. In short, they're as pure "dog" as a modern dog can be. Why not analyze the whole genome? Well, that would be a lot of data, and take a long time (and cost more). Instead, the researchers identified 246 locations (83 percent of them found for the first time), for a total of 429 genes, that were likely associated with domestication and focused their energies there. They compared the genetic material from modern village dogs with that of ancient dogs older than 5,000 years. Similar genetic signatures in both populations at those specific locations in the genomes meant that the signatures were likely the result of the original domestication events, and not later active selection by breeders.

The new research confirms that, as dogs were domesticated, behavioral traits such as tameness occurred first, and physical traits such as floppy ears followed. No word yet on when the gene allowing the patience to pose for silly pictures arose. (Credit: G. Tarlach) Most of the genes that differed significantly between the village dogs and the wolves (and appear to have changed during domestication) are linked to NCC development and migration. Selecting for behavioral traits such as reduced fear of humans, a key element of tameness, favored certain genetic signatures. In turn, those genetic signatures changed how the NCCs they activated actually migrated around the body and performed. And you know how it is in the universe: Change one thing and there's an unforeseen knock-on effect. The genes regulating NCC activity associated with behavior also regulate NCCs involved in traits such as pigmentation and whether your ears stand up or flop over. By reinforcing genetic changes associated with desirable behavior, the genetic changes associated with coat color and floppy ears were then also reinforced. We still don't know exactly how domestication took place on an individual level. Some researchers believe hunter-gatherers may have begun to trap and then keep wolf pups around, perhaps training them to hunt as they matured. (Don't try this at home. Researchers whom I've interviewed about dog domestication, and who have worked with wolves, maintain a healthy respect for the animals and strongly caution against any backyard domestication re-enactment attempts. It ends badly for everyone, wolves included.) Others believe wolves self-domesticated by following the humans in search of edible scraps. Truth be told, we'll probably never know how wolves became the first dogs. Now, however, researchers have a better idea of what was happening deep inside the developing wolf pup embryos during that transition. There are a few caveats to the new work, which the authors acknowledge. For example, a few dozen village dogs, despite hailing from all over the world, represent only a small portion of the genetic history of the dog, which continues to tangle with that of the wolf thanks to post-domestication interbreeding events. The amount of ancient dog DNA available for comparative study is also limited. More DNA from more village dogs and especially more ancient dogs will help future work in this area. But for now, it's a great step forward on the road to truly understanding how dogs came to be our oldest friends. The study appears today in BMC Biology.