Dogs and cats are popular companions. But they’re not the only critters we’ve converted from wild to mild. 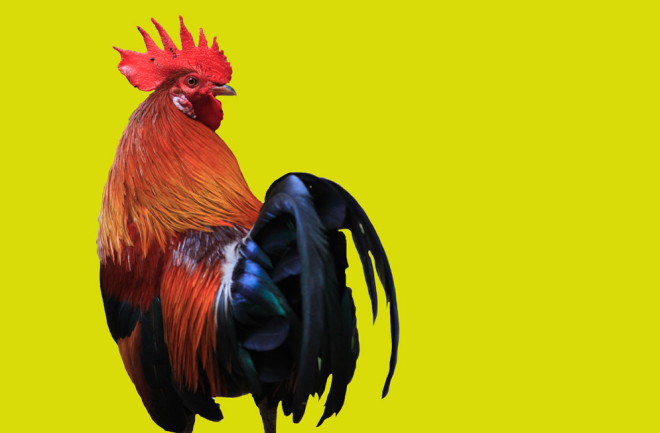 1. Which came first, the chicken or the egg? That’s easy: eggs. Microfossil embryos in primitive eggs from southern China are about 600 million years old.

2. The chicken, however, now the world’s most common domestic animal, dates back a mere 4,000 or so years. Most researchers believe that Gallus gallus, the red jungle fowl, was first domesticated in East or Southeast Asia.

3. In 2014, a study ruffled feathers with claims that bones from northern China showed the wild G. gallus had been chickenized into G. gallus domesticus about 10,000 years ago.

4. But critics suggested the 2014 paper really laid an egg: The bones purported to be from chickens were, they claimed, from pheasants and possibly even dogs.

5. The word domestication is itself contentious. Some definitions focus on genetic changes due to selective breeding; others describe it as humans removing an animal from its natural environment to control its entire life cycle.

6. A 2015 study offered a broader definition: a mutually beneficial relationship, over generations, between one organism influencing reproduction and care of another.

7. The study didn’t specify humans as the domesticator because these relationships can exist beyond our sphere, such as numerous species of ants that farm fungus or herd aphids.

8. Although researchers traditionally used archaeological evidence to determine when our species domesticated another, DNA can also show when a population went from wild to mild.

9. By comparing ancient and modern DNA from a domesticated animal as well as its nearest wild relatives, researchers can identify when specific genetic mutations associated with domestication arose.

10. Some of the earliest and most common genetic markers for domestication involve changes in the endocrine system that make an animal less fearful of humans.

Formica aerata is just one of a number of ant species that herd aphids. Alex Wild

11. In 1868, Charles Darwin was the first to document a collection of physical and behavioral traits seen in domestic animals, particularly mammals, but not their wild relatives.

12. It wasn’t until 2014, however, that researchers offered a single explanation for the phenomenon of floppy ears, smaller teeth, tameness and other “domestication syndrome” traits: a mild deficit in neural crest cells.

13 In vertebrate embryos, neural crest cells (NCCs) form along the dorsal side, or crest, of the neural tube (the proto-central nervous system).

14. NCCs spread through the embryo as it develops, and directly or indirectly affect a range of other functions, from the adrenal gland, which controls the fear response, to pigmentation, which can differ between domesticated and wild populations.

15. Also different between the two populations: the speed of development. Domesticated animals develop more slowly, so their NCCs spread at a slower pace, having minimal or no effect on the function they typically target. It’s that deficit that results in domestication syndrome.

16. Subsequent genetic studies have supported the NCC deficit hypothesis, most recently an April report in Science on the sequencing of 14 ancient horse genomes up to 4,100 years old; that’s close to the estimated dawn of domesticated horses some 5,500 years ago.

18. Dogs have the distinction of being the first animal humans domesticated — and the only one before the advent of agriculture. A 2016 paleogenetic study found two doggie domestication events perhaps 14,000 years ago: one in Europe and a second in East Asia. The latter population eventually spread west and replaced the former.

19. There’s genetic evidence for a similar double domestication in cats, too. In June, a study in Nature Ecology & Evolution found the African wildcat Felis silvestris lybica was first domesticated regionally in the Near East before 4400 B.C.

20. But a second domestication in ancient Egypt, before the first millennium B.C., proved more successful: This later lineage spread rapidly around the world via land and sea trade routes — and eventually took over the internet. Who’s the boss now?