The Faithfulness of the Coyote (and Other Urban Animals)

Greeting card companies are scrambling, no doubt, to fire entire departments of artists who draw lovebirds in cages and replace them with artists who draw scrappy wild dogs. That's because the new face of fidelity is the urban coyote, an animal that was until now better known for snatching untended Pomeranians from backyards. Hey, sometimes you have to feed your family.

Among mammals, monogamy is not a popular lifestyle. It's been estimated that five percent or fewer of mammal species opt to pair off exclusively. The practice is more common among dog relatives, which may need both parents to successfully raise a litter of puppies. But even when animals appear to be loyal to one partner, they may be sneaking around with other mates on the side. That's what researchers have observed in various fox, wolf, and wild dog species they've studied in the past—in fact, "extra-pair copulation" has turned up in every genetic study of canids. Evolution should favor animals that can have more offspring (or more-diverse offspring) without added effort.

Ohio State University graduate student Cecilia Hennessy* and other researchers set out to see what kind of mating system coyotes living in the greater Chicago area use. This included four counties in northeastern Illinois where coyotes are prevalent.

Coyotes seem monogamous, staying in pairs for years while they raise young and defend their territory together. But the researchers expected genetic sampling to show that these apparently loyal partners were really sneaking around. Coyotes in this area have plenty of resources available; previous studies have found that when conditions are good, canids are more likely to stray from their mates. And the coyotes in this region live close together in packs, which means more opportunities for cheating.

The researchers captured coyotes over six years, trapping and tranquilizing adults and borrowing pups from dens. The animals were tagged and sometimes radio-collared, and had blood drawn before being released again. (The researchers also took samples "opportunistically" from roadkill. Out of the coyote deaths they observed, 62% were from cars. "Urban coyotes get hit by cars a lot," Hennessy says.)

City rats are the opposite of monogamous. They live in big groups and mate all the time, with everybody.

In total, they managed to get samples from 236 coyotes, including 96 puppies. Hennessy explains that they used the blood samples from the roaming adults to try to identify the parents for each den of puppies. They found at least one parent for most of the dens. But in all puppy litters, even those with unknown parents, the researchers could deduce from the young coyotes' genes whether they were full siblings—or half siblings whose parents were sneaking around.

For the 18 litters of coyote puppies they studied, the scientists found no evidence of polygamy. As they report in the Journal of Mammalogy, the coyote pairs in the study stayed totally faithful to each other.

From the radio collars they'd put on the trapped coyotes, the researchers could track the movements of their subjects. This included seven mated pairs of coyotes, which "we could track and figure out how much territory they share with each other and time they spend together," Hennessy says. (Seven pairs may not sound like many, but Hennessy points out that trapping adult coyotes in urban areas is not easy. Actually, she says it's "really, really, really hard.")

Pigeons are said to mate for life, though this describes their behavior and not the genes of their young. They may not guard each other as carefully as coyotes do.

Three of the mate pairs in the study ended with the death of the male. Two of those females disappeared from the area after the death of their mates; Hennessy says this is common though it's not known why. It may be too difficult for one coyote to defend her territory on her own while searching for a new mate. The third female, though, held her ground and found a new mate the next year. Two of the original mate pairs had been together for at least eight years by the time the paper was written.

It's possible that urban coyotes are more monogamous than their rural relatives, although Hennessy says no one has studied the question. It's also possible that she happened to find the dens belonging to the most faithful coyote pairs out there, and there are philandering coyotes she just didn't find. "But to investigate 18 litters, several of which were whelped by the same mated pair in consecutive years, and to find no polygamy makes a pretty strong case that it doesn't occur in this population," she says. 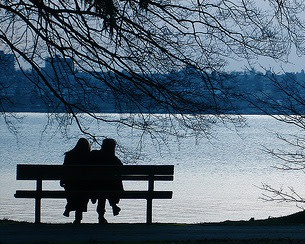 Scientists still don't know exactly why urban coyotes find monogamy the best policy. Hennessy says females may not have a choice in the matter, because males guard them carefully while they're fertile. And since males can be confident that they've really fathered the puppies in their dens, they can invest more resources in feeding those puppies. In packs, older siblings may also help care for the new young; if their parents are monogamous, then the siblings are related enough to make this worthwhile.

Human mating habits vary. An extensive literature on the monogamy or polygamy of high-profile humans can be found in journals such as Us Weekly.

Hennessy suggests an even simpler way of understanding urban coyotes. "I think it's just too much work for one male to get enough food for himself and two females," she says. "And if he doesn't help a female with pups, the pups will likely die." So, she explains, "Cheating without follow-up is just pointless." I can already see that on next year's Valentine's Day cards.

*Cecilia Hennessy is now a PhD student at Purdue University.