The face of Ariadne 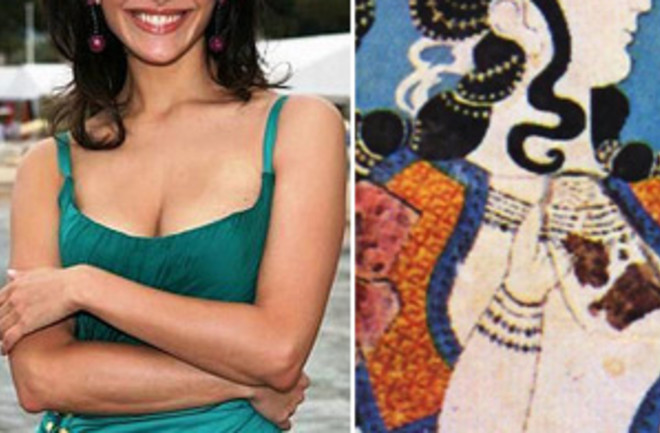 In response to my post from this weekend positing that the Sardinians are a particularly pristine distillation of the genetic heritage of Europe's first Neolithic farmers, a friend suggests that I compare & contrast Sardinian actress Caterina Murino and the depictions of women which one sees on the walls of Minoan palaces. The Minoans being the presumably pre-Indo-European people who were responsible for an ancient civilization on Crete, before their conquest by Bronze Age Greeks sometime in the 15th century BCE. The title is a reference to the daughter of king Minos of Knossos, as well as what Heinrich Schliemann asserted after he discovered the 'mask of Agamemnon'. In the late Bronze Age the people of Crete and Sardinia were associated with the 'Sea Peoples', raiders whose assaults on the kingdoms of the ancient Near East resulted in the fall of the Mycenaeans and Hittites, and the near collapse of Egypt. Also, since I've been referencing Dodecad's 10 putative ancestral components, I thought it would be useful to point to the phylogenetic relationships between them. Remember, these components are not necessarily real concrete ancient populations which were amalgamated. For example, the positions of the "Northwest African" and "South Asian" ancestral components may be a function of ancient admixture events which have distributed across the population and produced a distinctive stabilized allelic profile. I also wouldn't be surprised if both the "Southern" and "Northern" European components resemble each other because of an underlying Paleolithic European substrate which is represented by haplogroups U5 and I. Addendum: I would have juxtaposed the Minoan image with this photo, but copyright issues.