The Evolution of Feathers, as Told by Amber Fossils 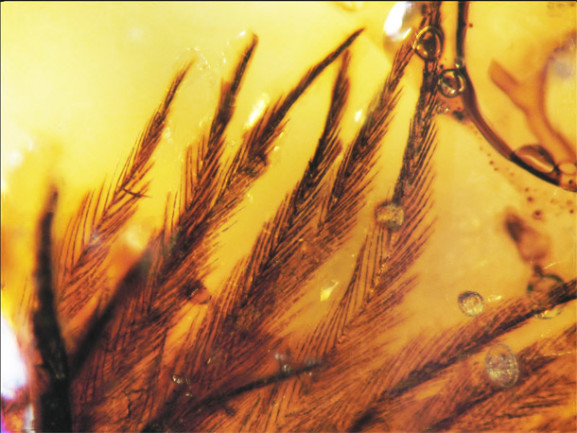 We now have enough fossils of feathered dinosaurs to fill entire museums. These specimens have beautifully recorded the history of feather evolution but Ryan McKellar from the University of Alberta has found another narrator for that tale: amber.

Amber is actually fossilised tree resin, and some of it contains feathers dropped by dinosaurs. McKellar, working with Phillip Currie, studied beautiful cache of 11 such pieces that had been recovered from Grassy Lake, Canada many years earlier. “These were chance finds when we were preparing the amber to look for insects,” says Currie. “About half a dozen specimens were in my "research to do" specimen cabinet when Ryan ran across some more in his work.”

These 70-million-year old specimens hail from the late Cretaceous period and they are far more diverse than other amber-trapped feathers from the same period. It’s impossible to say who the feathers came from but given that some of them are far simpler than anything seen in known birds, McKellar suspects that they came from other types of dinosaur instead. After all, such species are far more common in Alberta’s fossil beds than true birds are.

Together, the amber feathers encompass the entire evolutionary history of feathers in four different stages, from simple filaments to flight-capable plumes. “It fleshes out a framework that was already evident from the feathered dinosaurs, although the preservation is far more spectacular in terms of detailed preservation and even colours,” says Currie. The slideshow below shows the various types. 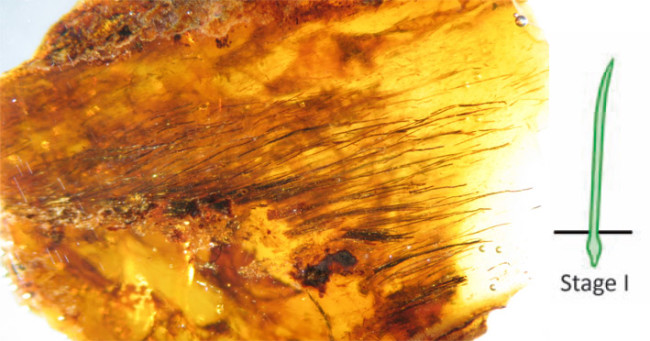 This is the first stage. They’re simple, single filaments, found in dense forests and unrecognisable as feathers. They’re different from the hairs of mammals because they don’t have any scales along their length. Nor are tubes from fungi or plants for they lack the thick cell walls that these groups have. They look a lot like the downy “dino-fuzz” that covered Sinosauropterx, the first dinosaur to be found with evidence of feathers. Sinosauropteryx’s fuzz was largely a reddish-brown colour, while those found in the amber ranged from dark to almost transparent. 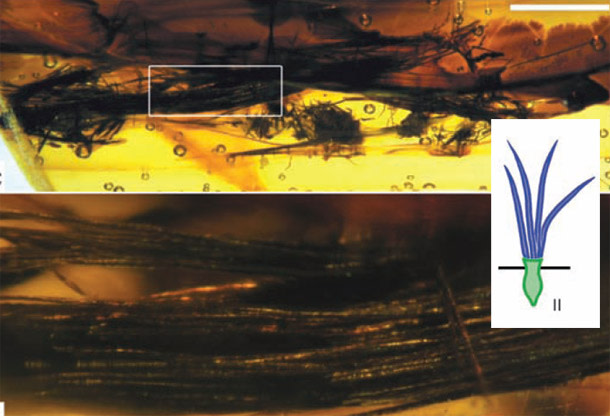 In the second stage, the filament has turned into a cluster of ‘barbs’. In a modern feather, the barbs branch off from a central stalk or ‘rachis’ but at this stage of feather evolution, the rachis doesn’t exist yet. Instead, the barbs all emerge from a shared base. They’re closest to the fuzz of Sinornithosaurus, another featheredmeat-eating dinosaur – possibly venomous, and one of the earliest members of the group that included Velociraptor and Deinonychus. 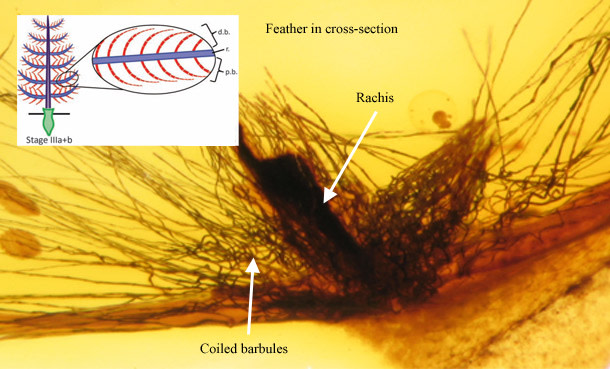 In stage three, the barbs partially unite to form a central rachis, and even smaller filaments called barbules start to branch off from the barbs. This type of feather is also found in McKellar’s amber and some of them have barbules wit tight coils at their bases. Grebes – modern diving birds – have similar coils in their barbules. When they dive, the coils expand and allow the feathers to absorb water, making the grebe less buoyant and allowing it to sink. It looks like this adaptation was already around in the Cretaceous period.

In the final stages of feather evolution, the barbules develop small hooks, which allowed neighbouring barbs to interlock like strips of Velcro. These hooks turned the feathers into flat vanes, which in turn allowed them to generate lift. These tiny structures helped birds to conquer the air, they’re the ones that cover the bodies of most modern birds, and they too are found in the Cretaceous amber.