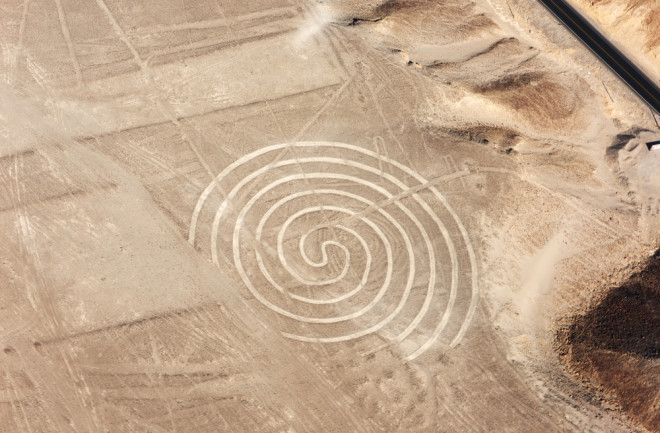 The Nazca Lines, ancient formations built by humans and only visible from above. (Credit: Lenka Pribanova/Shutterstock)

If you walk across the Nazca desert of southern Peru, there’s not much to see. The landscape is so arid that almost nothing grows; even the wind seldom stirs. But if you could propel yourself into the air and turn around to admire the view, a curious spectacle would appear.

On the desert floor below, a collection of faint lines would come into focus during the ascent, tracing sometimes winding, sometimes straight paths across the landscape. Distinct shapes would then become clear: a spider, a monkey, a tree and a giant, alien-like figure. These are the Nazca Lines, a collection of hundreds of faint etchings, also called geoglyphs, created almost two thousand years ago by indigenous inhabitants of what is now Peru. The dry environment and uncommonly still air have preserved the markings for modern-day archaeologists to puzzle over — and to guess at their purpose.

Lines in the Desert

The figures range in size, from just over a dozen feet to hundreds of feet across. Some lines run for miles. The markings make a curious collection: some are simple straight lines, while others reveal elaborate designs. Some appear labyrinth-like, suggesting that they may have been walked as part of rituals. Others are surmised to simply be trails that people used to cross the desert floor.

The region's dry environment has preserved the markings for roughly 2,000 years. (Credit: Sviluppo/Shutterstock)

The geoglyphs are thought to have been made by the Nasca civilization, who inhabited the region for around 800 years beginning in 200 B.C. (The terms "Nasca" and "Nazca" are often used interchangeably, but the former refers to the period and culture, while the latter describes geographical locations.) Scientists date the lines to between around 200 B.C. and 600 A.D., based on radiocarbon dating of pottery found nearby, estimates of rock aging and other measures.

Of the many mysteries of the lines, their survival is perhaps the simplest. It rains so little in the Nazca desert, less than an inch per year on average, and the air is so still, that there’s little to wash the lines away. Their construction, too, is easily explained. The lines were made by scraping away the reddish desert topsoil to reveal a slightly deeper layer that’s more gray in appearance. None of the lines are inscribed very deeply into the soil — no more than a foot or two. They vary from around a foot to over a dozen feet in width.

In 1982, a small team was able to reproduce one of the larger drawings, the condor, using wood and ropes to mark off measurements drawn from a small-scale drawing. These simple tools and methods would have been available to the Nasca at the time, and the reproduction easily shut down a theory that “ancient aliens” were somehow involved in the lines’ creation.

What Were the Nazca Lines For?

The purpose of the lines, however, has been more difficult to explain. Archaeologists have suggested a number of theories, including that the geoglyphs had religious or cultural significance, were involved with water somehow, or perhaps were related to astronomical observations. There’s still no consensus on the lines’ meaning, though it seems likely that they may have served more than one function.

In 2019, researchers found that this geoglyph, once thought to be a hummingbird, actually portrays a hermit — a subgroup of hummingbird that dwells in the forested regions of northern and eastern Peru. (Credit: John Kershner/Shutterstock)

The lines bear some superficial similarities to irrigation channels, suggesting they may have once been used to carry water. Indeed, though the region is dry, it does occasionally see flash floods. Could the lines have been used to channel this water?

It seems unlikely because, as some researchers point out, the lines are so shallow. An irrigation channel just a foot deep wouldn’t be very useful. There may be a more ceremonial relationship to water, however, as other archaeologists have suggested. The geoglyphs may lay out the groundwork for ceremonies or observances aimed at placating deities and bringing rainfall to the desert, they think.

Such rites may have involved actually interacting with the lines. Archaeologists Clive Ruggles and Nicholas Saunders, studying a newly discovered, labyrinth-like design, suggest that the Nasca would walk the path of the line, perhaps as part of ceremonies or initiation rites.

One of the earliest scholarly explanations for the lines holds that they serve as a kind of ground-based astronomical calendar. When Paul Kosok, a historian at Long Island University, was conducting studies of the lines in the early 1940s, he claims to have been standing at the end of one line just after the winter solstice. Looking up, he noticed the line pointed directly at the setting sun, marking its position on the shortest day of the year. Further study convinced him that the lines marked key points on the horizon where celestial bodies would appear or disappear on important dates.

Others have postulated that the drawings of animals might be constellations. As a New York Times obituary of Kosok’s protege Maria Reiche explains, both Reiche and collaborator Phyllis Pitluga believed some of the lines depicted patterns in the sky. This theory, however, has been contested by other scholars.

In all likelihood, the different lines and drawings may have had different meanings and purposes. Some may have indeed pointed to astronomical events, while others may have had purely ritual uses. Others still may have had a more prosaic purpose. As Ruggles and Saunders, who found the labyrinth in 2012, note, some of the lines may simply have been walking paths across the desert. These well-worn lines snake around hills and other obstructions, in contrast to the perfectly straight lines found in other drawings.

And even today, new drawings are being discovered in the desert. A Japanese team in 2019 announced the discovery of 143 new figures in the Nazca desert and surroundings. They include birds, monkeys, snakes and foxes — one so faint it required the help of an AI algorithm to uncover.

The hunt for new geoglyphs continues, as does speculation over what the lines meant to their creators. With each new discovery, we’ll likely have more and more information. Though whether it will be enough to divine the geoglyph’s meaning for certain, we may never know.