For 47 years, Goodall has studied, communicated with, and lived with chimps. 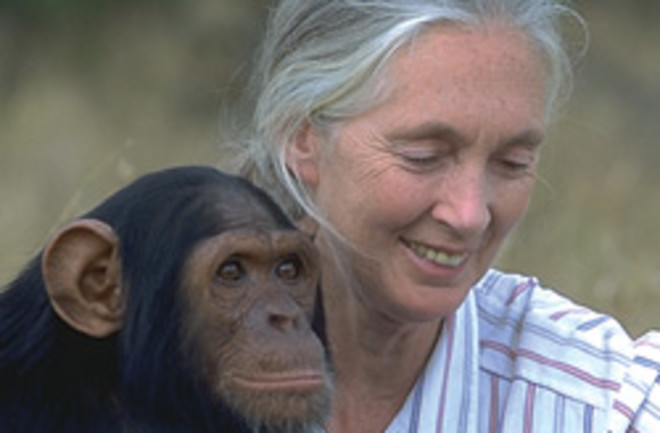 All images Courtesy of the Jane Goodall Institute.

Four decades ago, a leading zoologist dismissed Jane Goodall as an amateur. She agreed. “My future is so ridiculous,” she wrote. “I just squat here, chimp-like, on my rocks, pulling out prickles and thorns, and laugh to think of this unknown ‘Miss Goodall’ who is said to be doing scientific research somewhere.”

But within a few months of beginning her study of chimpanzees in 1960, insinuating herself into their lives in the forests of Africa,she made a shocking discovery: Chimpanzees construct tools. Legendary anthropologist Louis Leakey announced that because of Goodall’s observations, “we must redefine tool, redefine man, or accept chimpanzees as human.” She soon gained entrance to a doctoral program at Cambridge University, even though her highest previous degree was from a secretarial school, and was well on her way to becoming a scientific icon.

To this slim, ponytailed young woman, chimps looked more clever, more scary, and often more human than anyone had ever suspected. They hunt, sometimes engage in cannibalism, make war on each other, adopt orphans, and drum on tree roots and wave branches in ritual-like displays. Some chimps are cunning politicians; others seem devoted to their families.

Fame and age have broadened Goodall’s focus. These days she spends most of her time on the road, lecturing and raising funds for the Jane Goodall Institute (check their blog) and its efforts to assist wild and rescued chimpanzees. But she still keeps close tabs on her adopted family, the African primates who took her in.

When you arrived in Africa, did you imagine you’d be spending 47 years involved with chimpanzees? No [laughs]. How could I have back then? One year there seemed enormous at the time. I was only 23. I was invited to Africa by a school friend whose parents had moved to Kenya. One of their friends said, “If you’re interested in animals, you should meet Dr. Louis Leakey.” So I went to see him at the Coryndon Museum [where Leakey was director], and he ended up offering me a job as his secretary. During the time I worked for him, I had the opportunity to go out on the Serengeti with him. He knew I didn’t care about clothes and hair,dresses and parties, and that I really, really, really wanted to live with animals in the bush. And that I didn’t care about a degree—I just wanted to learn.

What is your fondest memory of observing the chimps in Tanzania? When I would sit quietly with a family and watch the interactions between mother and child, brothers and sisters. Yes, it was amazing to see tool use for the first time, but it didn’t really surprise me that they could do that. I hadn’t been to college and didn’t realize how exciting this observation was. Ironically, about three weeks after[field biologist] George Schaller visited me for the first time, I saw[chimpanzee] David Greybeard using a tool. George had said during his visit to my camp, “If you see tool using and hunting, it will have made the whole study worthwhile.” Within a month, I’d seen both.

Watching the chimpanzees, did you ever long to be one? Sometimes I did, especially in the early days when it was just me and the chimps and the forest. I just wanted to know what they were thinking and feeling, and what it felt like in the evening to be making a nest, and what it felt like to be a female when a big male comes thundering in. Are you afraid or excited? It was impossible to tell.

Did you immediately recognize distinctive personalities among the chimpanzees? It took a long time before they lost their fear of me. But as I got to know them and watched them interact, their personalities became very obvious. There were mean ones and generous ones, aggressive ones and gentle ones.

To many people, you are the scientist who made chimps seem almost human. Is that how they appear to you? They kiss, embrace, hold hands, pat one another on the back, swagger, shake their fists, and throw rocks in the same context that we do these things. There are strong bonds of affection and support between family members. They help each other. And they have violent and brutal aggression, even a kind of primitive war. In all these ways, they’re very like us.

Was the violence frightening? You were attacked once by a chimp named Frodo when you tried to help him. Well, he was only being a young male. When they bash you, they aren’t trying to hurt or kill you. If they were, I wouldn’t be here, because they are eight times stronger than me. So it’s just showing off, just bravado. If he’s scaring off other chimps, then why not me?

If chimps are so much like us, why are they endangered while humans dominate the globe? Well, in some ways we’re not successful at all. We’re destroying our home. That’s not a bit successful. Chimpanzees, gorillas, orangutan shave been living for hundreds of thousands of years in their forest,living fantastic lives, never overpopulating, never destroying the forest. I would say that they have been in a way more successful than us as far as being in harmony with the environment.

Yet they never evolved to our intellectual level. Why? What makes us human, I think, is an ability to ask questions, a consequence of our sophisticated spoken language. Chimps have something like the beginning of morality, but once you have language—once you can discuss something and talk about it in the abstract and take lessons from the past and plan for the future—that is what makes the difference.