The Denisovans May Have Been More Than a Single Species 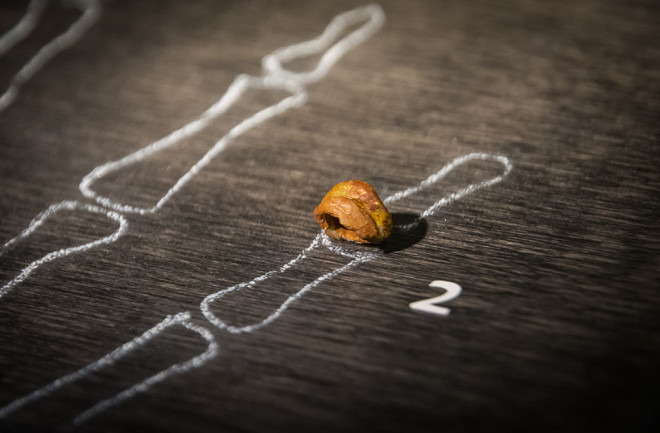 Replica of a Denisovan finger bone fragment, originally found in Denisova Cave in 2008, at the Museum of Natural Sciences in Brussels, Belgium. (Credit: Thilo Parg/Wikimedia Commons)

In anthropology, bones don't always tell the whole story. Ancient remains can be so rare that an entire species of hominids can be compressed into one single fragment of bone. Thousands of generations, millions of individuals, epic untold stories — and our only insight is a stray tooth, or a few curving shards of skull. That leaves us without a true view of who these people were, even when it comes to our most recent ancestors, like the Neanderthals or the Denisovans.

But a new study using genetic data is offering an intriguing new look into the history of one of those species, the Denisovans, revealing them as a people of far greater diversity, and reach, than ever before. The now-extinct people that we call Denisovans actually consisted of three distinct groups of humans spread throughout Eurasia, the researchers say. And one of those groups might well even be considered its own species. Ancient humans would have interbred with all three of these lineages on multiple occasions, as Neanderthals, Denisovans and Homo sapiens swapped genetic material in a process that has left Denisovan DNA still residing in our cells today.

Humanity rediscovered the Denisovans only recently. Though some of our long-lost ancestors would have been acquainted with them quite intimately, the humans of today only stumbled across this group of hominins around a decade ago. There, in Denisova Cave, researchers found just a few small fragments of bone that turned out to look unlike anything else they'd seen before.

The species were ultimately named for the cave where they were found, and for a time, the Denisovans remained quite mysterious. But recent work, including the sequencing of their genome, has begun to peel back the layers of mystery. The Denisovans, along with the Neanderthals, were part of a branch of humans that diverged from our own lineage somewhere between 500,000 and 700,000 years ago. They inhabited Eurasia for hundreds of thousands of years, reaching from Siberia far into tropical Indonesia, and they interbred with both Neanderthals and modern humans.

Read more: The first known human hybrid — her mother was a Neanderthal, her father was a Denisovan

Now, a study of genomes from modern-day Indonesians is making that story even more complex. Researchers from Indonesia's Eijkman Institute, as well as from New Zealand and Singapore, collected DNA from 161 modern individuals across a swath of the nation of islands. Then they compared it to genomes from other modern-day humans, Neanderthals and Denisovans.

Previous studies have shown that Southeast Asians — and Pacific Islanders in particular — have a greater proportion of Denisovan DNA than the rest of us. These researchers confirmed that finding, but the breadth of their data also allowed them to go a step further. Pairing their evidence with geographic and demographic data, they used the modern-day fragments of Denisovan DNA to reconstruct what those ancient populations actually looked like.

The result is a trove of data on the ancient hominins, one that substantially deepens our understanding of their lives writ large. But the find is no lucky break — Denisovan DNA has been lurking in the genomes of Indonesians and others in Southeast Asia all along. Up until now, though, Western scientists hadn't thought to look.

"The genomes in this paper ... are the first genomes from Indonesia," says paper co-author Murray Cox, of New Zealand's Massey University. "That's pretty amazing because Indonesia is the world's fourth largest country, it's got 250 million people and it's as big as continental Europe. It just shows that disparity between science that happens in the West versus science that happens in developing countries."

The researchers published their work in the journal Cell.

Perhaps the most significant way that the new genetic evidence alters our conception of the Denisovans is that it reveals them to be diverse. In some modern Indonesians, scientists found not one, but two distinct Denisovan genomic signatures. What's more, these two groups also looked different from the Denisovans previously found in Siberia, which they researchers say was another group altogether.

For those of you keeping count, that adds up to three different kinds of Denisovans spread from Siberia to across the disparate islands of Indonesia. It's a substantial expansion of Denisovans' range. Whereas scientists published evidence proving they lived in just one small cave in 2010, we now know that Denisovans ranged across thousands of miles during their time on Earth.

Being spread across so wide an area for so long probably played a role in the Denisovans' eventual diversification into multiple lineages. The three groups were bounded by two large geographical impediments: the Himalayas in the east, and the oceanic gaps between the islands that make up Indonesia today. As the researchers see it, one group of Denisovans would have lived in or around present-day Siberia, Kazakhstan and in China just north of the Himalayas. And the remains from members of this group are likely what researchers found in 2010.

But a different group of Denisovans lived in Southeast Asia, around what is now Thailand and Vietnam. The third group called the islands of Indonesia home. Those two southern groups diverged from the Siberian Denisovans over 250,000 years ago. That's before anatomically-modern humans even appeared. And at least one of these groups survived well into the late Pleistocene, dying out just tens of thousands of years ago.

"This is a very interesting article, which presents some new data that helps to round out the picture of archaic admixture in New Guinea and nearby," says Sharon Browning, a researcher at the University of Washington who studies the genomics of ancient hominins, in an email. "The finding of another introgressing Denisovan population is interesting and in line with what has been seen earlier in terms of population structure within Denisovans ... It implies that several (at least three) very distinct Denisovan populations were in existence and have contributed to modern human genomes."

That means when modern humans made their way out of Africa, they were far from alone. Instead, they would have been the newcomers in many of the places they traveled to, entering the lands of hominins that had lived there for thousands of years.

"It would have been a really, really interesting time when our ancestors left Africa," Cox says. "They would have encountered people everywhere they went."

And it was more than just a meet and greet. Given their proximity, it's no surprise that mating between the two lineages occurred on more than one occasion. Modern-day humans still carry the legacy of those inter-lineage trysts in our DNA. Southeast Asians, and people from Papua New Guinea in particular, got a much richer Denisovan inheritance than the rest of us. That's probably because their ancestors lived around the ancient humans the longest. That left Papuans, an ethnic group today inhabiting the island of New Guinea, carrying genetic signatures from not one, but two lineages of Denisovans. This includes genes involved with both immunity to infectious diseases and metabolism.

"It's clear that we've actually inherited a lot of stuff from these archaic hominins, it's really affecting us biologically," Cox says.

One of the groups that showed up in the Papuan's genomes actually looked so genetically distinct that Cox says they should likely be considered an entirely new species. While the researchers cannot name a new species without actual fossil evidence, Cox says that, genetically, the group living in southeast Asia looked as different from the Denisovans in Siberia as it did from Neanderthals.

"If we're going to call Neanderthals and Denisovans by a unique name, which we do, then we should probably call this other group by another name," he says.

The concept of "species" among ancient hominins is a bit difficult to define — after all, they could often produce fertile offspring with each other, violating a common definition of a species. But, by the current nomenclature, these Denisovans would have been as distinct as other groups of hominins that we call species. If so, it would add yet another branch to the still-growing evolutionary tree of ancient humans.

Finding the Denisovans spread across so much territory and inhabiting such different environments should also notch up our regard for the extinct humans' abilities, Cox says. "They must have been able to do water crossings, so they must have had some sort of rafts or canoes. We know that they lived across a wide range of environments, from up in Siberia where it freezes during the winter all the way down to tropical rainforests," he says. "So they must have been incredibly adaptive."

Indeed, the Denisovans lived for hundreds of thousands of years in territories where modern humans are today, and they survived for longer than our own species has existed. They were numerous and geographically diffuse enough to birth what is likely an entirely new species of human, and they and our ancestors managed to live in close proximity to each other for tens of thousands of years. Though more research will surely uncover new and more surprising facts about their lives, one thing is clear: We cannot tell our own story today without also telling that of the Denisovans.