The Dance Language of Honeybees Is Sloppy 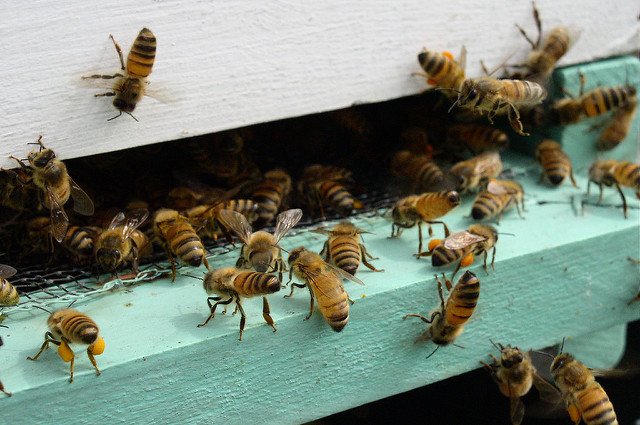 "Dance like nobody's watching" is fine advice, unless somebody is watching, and she needs to translate your dance steps into instructions to find food. That's the case for honeybees. But even though the rest of the colony must interpret their dance moves carefully, it turns out honeybees are pretty sloppy dancers. When honeybees return to the hive after finding nectar or other food, they famously do a "waggle dance" to tell their sisters where the food was. The waggle is a shimmying run that the bee repeats over and over on a vertical comb inside the hive. The angle of her run, compared to vertical, tells the other bees which direction to fly in (compared to the direction of the sun). And the length of the run tells them how far to go. You'd think these dances would be precisely calibrated, since bees use them to keep the whole colony fed. But in earlier research, University of Sussex husband-and-wife team Roger Schürch and Maggie Couvillon saw that wasn't the case. The dancing code didn't seem consistent from one bee to the next. "Our previous experiment was showing us a puzzling amount of variation," Schürch says. Older studies by other researchers had also shown individual differences in how bees spoke the dance code. So Schürch, Couvillon and their coauthors decided to use a larger group of bees, and a greater range of distances, to find the answer. The researchers trained bees from three different colonies to visit five artificial boxes for food. The boxes were at set distances from the hive, ranging from 200 meters to 400 meters. The scientists gave the bees individual markings so they could tell them apart. Then they sent the bees out to gather sugar water from these boxes, and watched to see what each bee told her sisters when she came home. In total, the researchers observed 753 dances from 75 bees. They focused on the length of each waggle dance, which should correspond to the distance of a nectar box from the hive. If the bees followed a consistent code, then each quarter-second of a dance might correspond to 100 meters of distance, for example. But that's not at all what the researchers saw. "Each bee possesses her own calibration," they write. For example, one bee visited a nectar box 210 meters away, then performed a waggle dance 0.4 seconds long. But based on how a second bee translated distance to waggling time, she might interpret that dance as pointing to nectar 320 meters away—a 50 percent farther flight. It's possible that the bees in this study had an especially inconsistent dance code, the authors write, maybe because these colonies had a mixed genetic origin. But experiments with other bees have also found that waggle dances aren't very precise. "The efficiency of the dance communication is very low," Schürch says. Imagine many bees watch a certain dance, then fly off to find the food: by the time they've gotten 500 meters from the hive, Schürch says, those bees may be scattered 150 meters in every direction. If the waggle code were precise, they'd all be in one spot. The researchers only looked at the length of waggle dances in this study, not their angle. But based on other studies, Schürch thinks there's a lot of individual variation in that element of the dance too. Nevertheless, bees manage to eat. "The majority of the dance followers will end up somewhere near the indicated source," Schürch says. Despite their scattering, "Few will be very far off." If the original dancing bee came from a hay meadow, say, or a certain patch of forest, her approximate directions will get enough of her sisters there to find food. So although the waggle code isn't very precise, it may not need to be any better, Schürch says. "Probably the dance is good enough."