The Curious Case of the Immortal Jellyfish 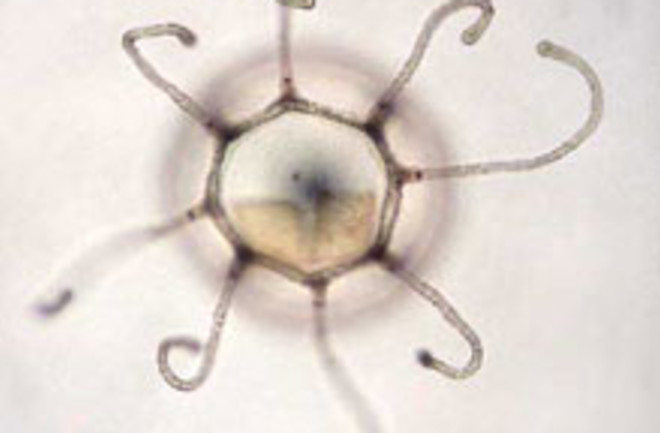 It's official: the only thing certain in this world is taxes. That's because death, for a tiny sea creature, is not inevitable. Turritopsis nutricul, a jellyfish-like hydrazoan, is the only animal known to be potentially immortal. Once it reaches sexual maturity, Turritopsis looks like a tiny, transparent, many-tentacled parachute (only about 5mm in diameter) that floats freely in warm ocean waters. But when times get tough, Turritopsis can turn into a blob, anchor itself to a surface, and undergo a sort of reverse methamorphosis back to its youthful form as a stalk-like polyp. That's like a butterfly turning back into a caterpillar. Scientists, who first described this phenomenon [pdf] in the 1990s, believe Turritopsis can repeat its life cycle indefinitely. The trick to Turritopsis' infinite do-overs is a process called transdifferentiation, which turns one type of cell into another. While other animals can undergo limited transdifferentiation to regenerate organs (salamandars can regrow limbs, for example), Turritopsi is the only one that can regenerate its entire body. Not surprisingly, the immortal Turritopsi are spreading. Native to the Caribbean oceans, Turritopsi have now been identified in waters near Spain, Italy, Japan, and the Atlantic side of Panama. Even though specimens from different locations have different numbers of tentacles (from 8 to 24), genetic tests confirm that they are of the same species. Researchers believe the creatures are criss-crossing the oceans by hitchhiking in the ballast tanks of large ships. Related Content: DISCOVER: Immortality, One Cell at a Time DISCOVER: How to Grow a New Limb 80beats: Jellyfish Taking Over World's Oceans; Shutting Down Nuclear Power PlantsImage: Maria Pia Miglietta