Religion was closely intertwined with archaeology in the early days of the science. But what happens when the relationship becomes too close? 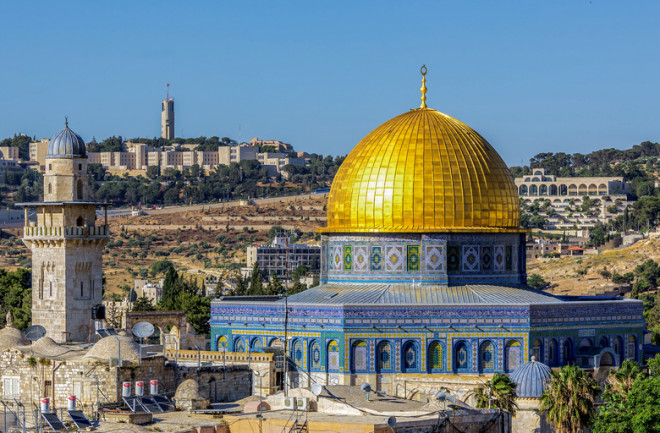 The Dome of the Rock in Old City, Jerusalem. (Credit: Vadim Petrakov/Shutterstock)

The Temple Mount is one of the most popular destinations in the ancient city of Jerusalem. In Arabic, it’s known as Haram al-Sharif — "the Noble Sanctuary." Considered the holiest site in Judaism and third holiest in Islam, it is where, according to the Bible, King Solomon built the first temple for the Jews. It's also said to be the location where Abraham offered his son Isaac as a sacrifice, and where the Prophet Muhammad made his Miraculous Night Journey to the throne of God. The golden Dome of the Rock atop the Temple Mount commemorates that event, which is sacred in Islam.

While visiting such hallowed ground today, it's easy to forget that the Temple Mount’s significance maybe wouldn't be known without the archaeological excavations and discoveries that began more than 150 years ago.

Biblical archaeologists have long been motivated by their faith to explore the historicity of biblical events. Today, these researchers are trained in the field, but that wasn't always the case. "The first archaeological endeavors in the Holy Land were conducted not by archaeologists but by theologians, biblical scholars, and engineers primarily interested in locating places mentioned in the Bible," writes Eric Cline, in his book Biblical Archaeology: A Very Short Introduction.

Cline, an anthropology professor at George Washington University, credits an American minister, Edward Robinson, with many early archaeological discoveries across the Holy Land. Robinson explored Palestine in 1838 with an American missionary who was fluent in Arabic and identified more than 100 sites mentioned in the Bible. Some noteworthy finds included the Siloam Tunnel and Robinson's Arch at the Temple Mount, which was named in Robinson's honor.

Though Cline notes that Robinson's contributions were religiously motivated, his efforts are still recognized by academic archaeologists today. And Robinson was far from the last to be inspired by religion to explore the ancient world. A surprising number of findings have come to light by religiously-motivated archaeologists and religious organizations. "Interest in the ancient Mediterranean, driven by religious organizations, led to a lot of early descriptive and chronological work that was useful when we knew very little," says John Henderson, an anthropology professor at Cornell University.

For instance, the Catholic Church's Pontifical Commission for Sacred Archaeology was responsible for expansive catacomb excavations in Rome, along with many other endeavors in nearby regions. And this type of work has gone beyond Europe and the Middle East. Scores of historical sites across Central and South America — including digs in San Isidro, El Mirador, Izapa and the Paso de la Amada — have been funded or explored by religious organizations interested in the outcome of excavation. For instance, discoveries of Olmec civilizations across the Gulf of Mexico and the Pacific coastal regions of Chiapas have likewise been funded by religious groups. The Church of Jesus Christ of Latter-day Saints began funding such projects in the mid-20th century in hopes of finding locations mentioned in one of their religious texts, the Book of Mormon.

What started out as an effort to corroborate findings in a book of scripture evolved into an academic organization — the New World Archaeological Foundation (NWAF), which has added a number of contributions to Mesoamerican archaeology. "They made meticulous site maps and carried out competent excavations," says Norman Hammond, an emeritus professor of archaeology at Boston University and senior fellow at Cambridge University. Hammond says it was the NWAF’s support that helped bring to light many of the lesser-known sites beyond "the spectacular temples that made Maya civilization famous."

Fred Valdez, an anthropology professor at the University of Texas also commented on the work of the NWAF. "While I can’t address the reasoning behind the NWAF's strong archaeological interests," he says, "there is no doubt that the archaeology undertaken and published by them has been of great significance towards understanding Maya civilization."

A Dig for Donors

While some archaeological digs and excavations are funded by government grants, others are still dependent on private funding. Religious organizations sometimes step in as the lone source of financial assistance when it isn't available anywhere else. "Funding is very competitive and hard to get," says Susan Gillespie, an anthropology professor at the University of Florida. As a result, she says that "archaeological projects are often funded by religious organizations or just wealthy donors who are religious."

The cost of excavations and analysis can be enormous. Some digs take months or even years to complete — and experts can be expensive to enlist. There's also the cost of specialized tools and equipment needed, significant travel expenses, and the arduous process of preserving ancient artifacts. That doesn't take into account the work that must occur before digging even begins. Preparations include extensive site research, the accumulation of documentary evidence and the process of finding funding sources once these preliminary steps are completed.

Some religious organizations may fund archaeological projects that go beyond their scope of interest. Hammond says that leaders of the Church of Jesus Christ of Latter-day Saints provided him with generous financial support to cover some of his expenses while he was excavating the early Mayan site of Cuello in northern Belize during the 1970s. Hammond says that the church leaders were aware he was a religious skeptic, but they offered him financial support anyway. "Our work produced no support for LDS beliefs, but no negative feedback ever happened," he says.

Involvement of religious organizations isn't always positive, however, and many academic archaeologists are discouraged by the way they can hinder the work. For example, the Temple Mount may never be fully excavated or studied extensively due to its religious importance to multiple faiths and the ongoing Israeli-Palestinian conflicts there. An Islamic trust currently manages the site, and its managers — an organization known as the Jerusalem Islamic Waqf — say the site is too sacred for any further archaeological excavations.

To add to that, there is also a history of religious believers ignoring or even burying scientific conclusions in an effort to promote unsupported religious beliefs. "In the beginning of archaeology, most interpretations were made in support of the Bible because to do otherwise would be heresy," Gillespie says.

But even modern archaeological findings can have devastating consequences when religious interpretations are applied. The city of Beirut, Lebanon — not far from the ancient city of Jerusalem — is one such example. Throughout much of Beirut's history, Arabic Muslims and Canaanite Phoenicians were thought to be one people. But when French archaeologists started digging in Lebanon, they discovered that there may have been two distinct peoples tied to the region — an idea contested by some scholars but perpetuated by certain religious groups. "Some Christians didn’t want to be seen as Arabs, because to them Arabs were Muslim," writes Rose Eveleth in an article for Aeon.

While some archaeologists believed there was still more history to uncover, officials authorized most of the ancient city to be bulldozed. The city was rebuilt in favor of modernization, but some are skeptical about the true motivation. Archaeologist Albert Naccache, quoted in Eveleth's Aeon story, claimed the city's renovations were motivated by religion to preserve the notion that Beirut is an Arab-only nation. Beyond that, archaeological work is hindered when religiously-influenced agencies decide which ancient sites should be excavated, and which ones should not. "Archaeologists argue that the Israeli government favors saving ancient Jewish sites, especially in Jerusalem, over ones linked to other religions," science journalist and Israel native Josie Glausiusz writes for Nature.

Religious bias can also complicate interpretations of findings once discoveries are made. "One problem with archaeology stimulated by organized religion is that the funders — and often the practitioners — are fully committed to particular versions of the past," Henderson says. He adds that "it’s always hard in archaeology to avoid the trap of inevitably finding what you expect and failing to see anything that you expect to be absent; adding religion to the picture makes it even harder."

Regardless of whether such devotion has led to disillusion, this much is certain: Religious organizations have made an impact. "My guess is that if organized religions had not been interested in archaeology," Henderson says, "our view of history would be substantially different."