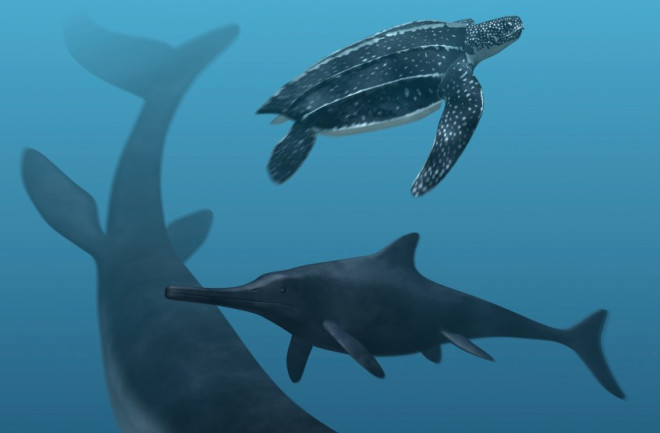 The leatherback turtle (top) and mosasaur (bottom) are countershaded (have a dark back and light belly), whereas the ichthyosaur (center) is uniformly dark-colored. Credit: Stefan Sølberg

Leatherbacks, and other ancient sea reptiles, wore black. That's the conclusion of a new study on three fossilized sea reptiles, in which scientists reconstructed the color of the creatures’ skin by detecting traces of the pigment melanin. Beyond a fashion statement, the melanin (and accompanying brown/black hue) may have been an adaptation for living in cold water and for camouflaging the animals, according to the researchers.

Although artistic renderings of long-gone reptiles are often impressive, the colors are usually left to the imagination—skin doesn’t really keep well over millions of years. For evolutionary biologists, this color-blindness had long been a nuisance, since color is a key trait on which natural selection acts. From cryptic brown

, adaptive color provides clues for understanding how certain species have come to exist. But, while a set of bones can tell us a lot about how an extinct animal’s form and function, without the skin, color usually remains a mystery. Fossil Fortuity Thanks to technology and a little luck, lead author Johan Lindgren and his team have found a solution to the color conundrum, revealing reptile colors from as far back as 190 million years. “On rare occasions, the fossil record reveals examples of exceptional preservation,” Lindgren wrote in the paper

, and an ancient leatherback—were examples of such exceptional preservation, possibly the remains of skin tissue. To see if the smudges truly represented reptile tissue or were simply bacteria covering the fossils, Lindgren’s team scraped it off with a scalpel and examined its atomic structure using mass spectrometry and scanning electron microscopy. By comparing the chemical signature of the tissue with the known signatures of different pigments, they determined that the tissue contained mostly melanin. The team also spotted clusters of oval-shaped black masses resembling melanosomes (the organelles where melanin is produced) found in modern lizard skin.

Lindgren’s team concluded that the three reptiles all sported a similar shade of brown/black due to the melanin in their skin. Cool. But other than being the Goths of the deep sea, why is that significant? For one, high melanin is an adaptation. Lindgren suggested that the dark color could have provided camouflage in the murky depths where the reptiles lurked. Perhaps more importantly, melanin allows animals to heat themselves faster and to maintain higher body temperature because it absorbs a large amount of sunlight. Think of a drab box turtle basking on a rock at high noon. High melanin content enables venturing into colder water, and thus the reptiles’ super-tan may explain how they ended up living in the frigid waters of the Arctic and Antarctic.

The real kicker, however, is that the three reptiles are about as closely related to each other as we are to sloths. Mosasaurs are the stuff of sci-fi imaginations run amok, 60-foot shark snackers that lived around 85 million years ago. Ichthyosaurs were smaller and fishlike, living 100 million years earlier, and the leatherback turtle in the study kicked it around 55 million years ago. In other words, these beasts evolved similar complexions completely independently of each other in one of nature’s great coincidences, or as biologists call it, “convergent evolution.” But as Lindgren points out, this coincidence was likely no random act, but rather natural selection in action. Thus it appears black was in fashion long before everything else became the new black.