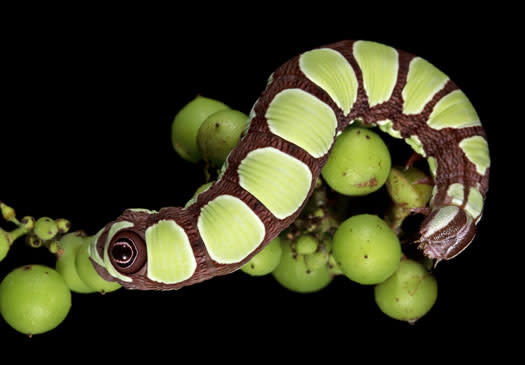 Photo Credits: All text by Smriti Rao; all images by Samuel Jaffe

For the lowly, wingless caterpillar, survival is a daily battle. Luckily these wily crawlers are masters of disguise and defense. Photographer and naturalist Samuel Jaffe spends countless hours collecting and carefully raising various species of Massachusetts caterpillars in order to capture their most stunning tricks on film.

This Abbott's sphinx (Sphecodina abbottii) caterpillar sports a camouflage of brown skin with green dots that run along the length of its body, making it barely visible as it clings to a growing cluster of grapes.

Mature Abbott's sphinx caterpillars come in two color varieties: grape-mimicking individuals like this one or brown ones that resemble bark. As an extra defense, this caterpillar also has a false eye. When a fully mature caterpillar is disturbed, it raises its rear end and "looks" at its attacker. If "looking" doesn't scare off the predator, the caterpillar can also make loud hissing noises. 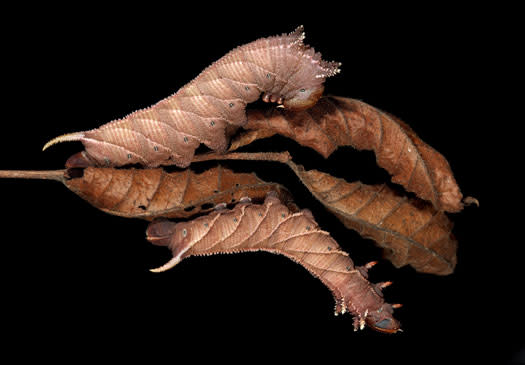 Walking through the woods near the town of Harvard, Massachusetts, Jaffe came across these fellows near clumps of dried American elm leaves--but he had to look closely to see them. This variety of the four-horned sphinx (Ceratomia amyntor) looks exactly like a dried leaf.

When one of these caterpillars is hiding near a cluster of dead leaves, it can certainly hope not to be noticed. But if it is, it has a backup plan. When disturbed, it rises up on its rear prolegs, the fleshy support structures to the rear of its true legs. Then it arches its back, and--like any self-respecting, peeved four-horned sphinx caterpillar--thrashes its head from side to side. 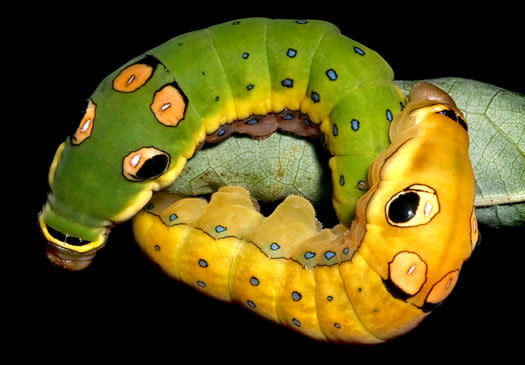 Looks like a snake, smells like a snake--must be snake, right? Nope. However, predators that come across an annoyed spicebush swallowtail caterpillar (Papilio troilus) may well think they've encountered a serpent.

The spicebush swallowtail is an impressive snake mimic. In addition to its fake eyespots, it can inflate a large pair of bright red, stinking horns that look like snakes' tongues and smell like snake musk.

The yellow caterpillar in this image is a little older than the green and is closer to the pupal stage, the final step before it metamorphoses into a butterfly. It will soon be searching for a place to become a chrysalis, so its color has shifted towards the hues of the forest floor. 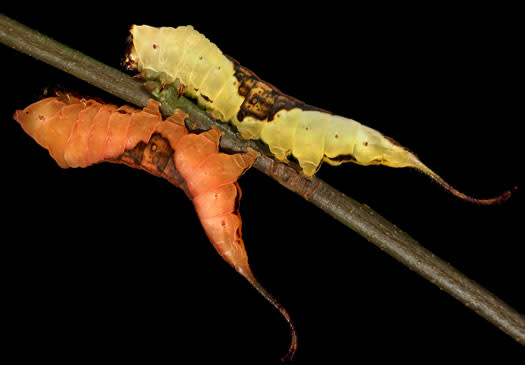 In this image, Jaffe captured two furculas on a black cherry branch. As with the spicebush swallowtail caterpillars, the caterpillar closer to pupation has become darker and deeper orange as it will soon be searching for a suitable place to pupate. 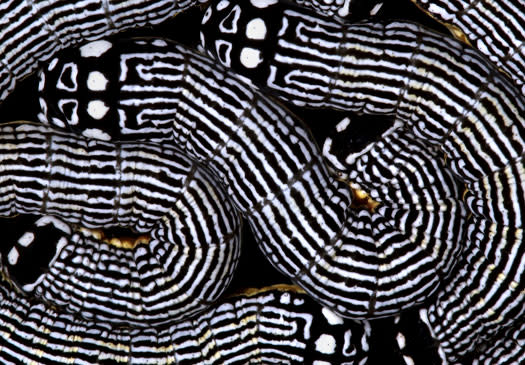 In this image you see a mass of turbulent phosphila (Phosphila turbulenta) caterpillars crowded on their host plant. If this group is approached by a predator, the caterpillars launch into an action sequence that could have found its way into the Matrix trilogy.

First, the mass of striped caterpillars will begin to churn about in a disorienting display (disorienting for some animals, anyway). If that doesn't work, the caterpillars launch themselves into the air and hang wiggling from silk threads. The effect, needless to say, is dramatic and off-putting to predators. 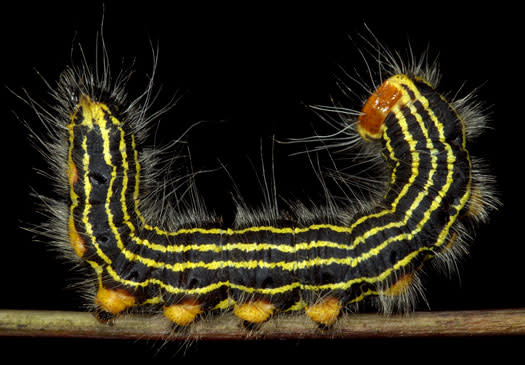 The yellow-necked caterpillar (Datana ministra) doesn't worry overmuch about blending into the background, instead it makes a bold defensive display. Like the turbulent phosphila, it is gregarious and can be found in clumps of dozens or even hundreds of individuals. When disturbed, the caterpillar thrashes and raises its large jaws.

This specimen was collected in September on Martha's Vineyard. Jaffe notes that many of the species he collects can be found in the suburbs of the Northeast. Says Jaffe: "A major aim of my work is to show people that amazing creatures and diverse biomes exist even right in our own backyards." 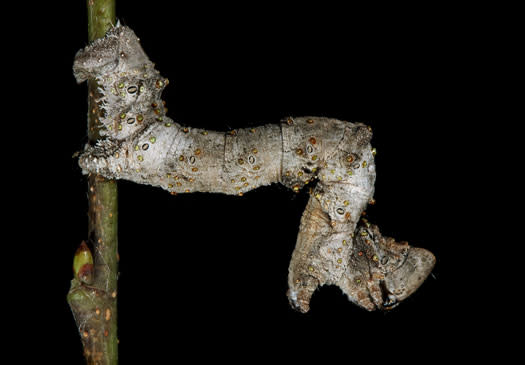 The oak beauty (Phaeoura quernaria) caterpillar mimics a twig so cleverly that there is almost no contrast or shadow between the animal and the wood it sits on. It accomplishes this trick with frilled hairs that emerge from between the caterpillar's rear prolegs and lie against the twig. The caterpillar's coloration, texture, and structure all allow it to blend seamlessly with the wood.

Jaffe notes that this caterpillar turns into a brown moth, which is an excellent tree bark mimic. 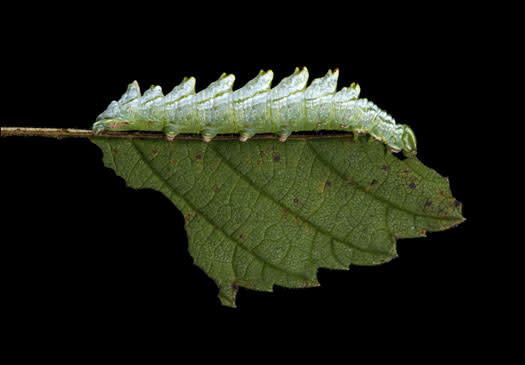 The double-toothed prominent (Nerice bidentata) caterpillar is seen here feeding on its sole host plant, the elm--and reflecting the leaf it's nibbling on. The caterpillar eats no other plants and has, therefore, evolved this very particular camouflage.

A close examination reveals that the caterpillar's prolegs are colored light purple-pink, the same hue as the scarred elm leaf tissue; the structure of its abdomen also relates to the double-toothed edge of an elm leaf. 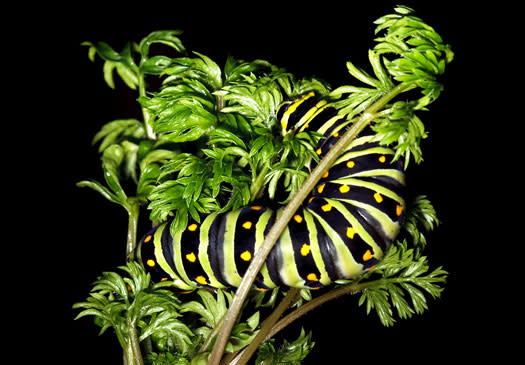 Jaffe captured this picture of a black swallowtail (Papilio polyxenes) feeding on its host, the carrot plant.

Despite the caterpillar's bright coloration and bold patterning, it's somewhat camouflaged amidst the sun-dappled carrot leaves. The reasons for its striking appearance aren't yet clear; some entomologists have suggested that its colors may mimic those of the poisonous monarch caterpillar or might warn predators that the caterpillar has a nasty taste.

The caterpillar's other defenses include inflatable red horns that emit a terrible stink, like those of the spicetail swallowtail.