The Chemistry of Instinct: Here's What Makes Mice Freeze in Fear 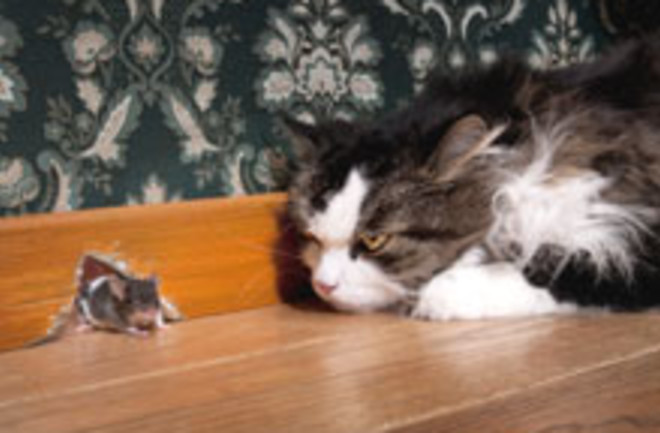 It's the essence of instinct: If you take a lab mouse who has never caught a glimpse of a cat and waft a little eau de feline towards it, the mouse will freeze in fear, and will then back away from the source of the odor. Now researchers have pinned down the chemical signals the mice are reacting to--and have shown in the process a fascinating new form of inter-species communication.

Mice have a specialized organ in their noses that picks up chemical signals, called the vomeronasal organ, which helps them detect pheromones emitted by other mice. These mice pheromones have a direct effect on behavior--most obviously in the realms of mating and fighting. In this new study, published in the journal Cell, neurobiologist Lisa Stowers decided to investigate whether the vomeronasal organ was capable of picking up signals from other species as well.

The reseachers took normal lab mice and mutant mice with inactive vomeronasal organs and presented them with cotton balls laced with predator smells, including cat saliva and rat urine. The normal mice backed into the corners of their cages as if trying to escape a predator's attention, but the mutant mice showed no signs of concern. The mutants were so relaxed that they didn't even react when a live but anesthetized rat was placed in their cages.

“In fact, one of our subjects curled up and went to sleep next to the rat,” Dr. Stowers said. “We think he was cold” [The New York Times].

The researchers then identified the precise chemicals that were triggering the fear reaction in mice by dripping one chemical compound at a time on to a cotton ball, and found that compounds called Mups, or major urinary proteins, were the active ingredient. Despite their name, Mups aren't only present in urine, but also in saliva and other secretions. Experts say this work is a major step forward for understanding the biology of fear.

“This paper moves the field forward by about a century, because it actually identifies the proteins that are responsible for eliciting fear in mice,” says Leslie Vosshall, a neurobiologist at the Rockefeller University in New York City. It also shows that “Mups can be used not only for chemical conversations of animals in the same species, but they can also send information across species” [ScienceNOW].

80beats: Mammals Have a Nose for Danger (Literally)

80beats: Do Humans Communicate Via Pheromones? The Jury Is Still Out

DISCOVER: The Brain: The First Yardstick for Measuring Smells