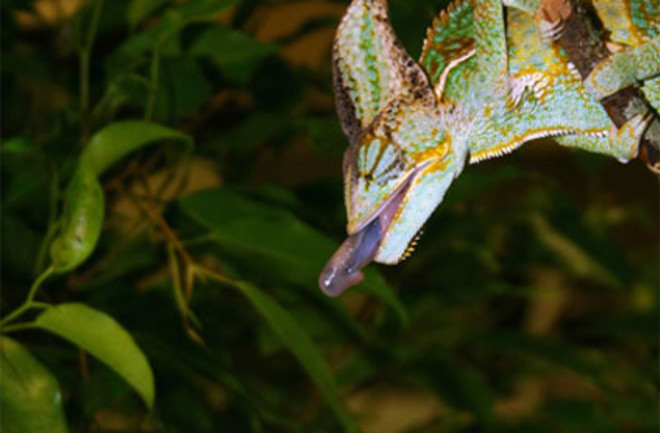 Hot, cold, in between, it doesn't really matter to chameleons: They're going to snare their prey anyway, according to findings in this week's Proceedings of the National Academy of Sciences. That's because their elastic tongues are designed like ballistic weapons. Chameleons fire their tongues at breakneck speed, says study leader Christopher Anderson.

"A chameleon's tongue travels at accelerations exceeding 400 meters (1,312 feet) per second squared, or about 41 Gs of force," he added. To put that into perspective, a space shuttle only develops about three Gs of force when it takes off [Discovery News]

. Given that muscle performance diminishes when it gets colder, and that these lizards are ectothermic (cold-blooded), one might think their tongue prowess would trial off sharply as temperatures drop. Not so, Anderson says. He and his team filmed veiled chameleons (Chamaeleo calyptratus) eating crickets, and controlled the temperature as they watched. For other cold-blooded creatures, the researchers say, an 18-degree Fahrenheit drop in the temperature causes a 33 percent decrease in muscle speed, and an even more dramatic drop-off in the speed of tongue movements. But the chameleons

had tongue snaps that only slowed by about 10 to 19 percent ... with the same temperature decrease [Scientific American]

. The chameleons' tongues also extended to their full glory despite the temperature change.

The key is how the chameleon launches its collagen assassin. Measuring twice the creature's body length, the tongue stays coiled inside until needed. While a muscle must initiate the tongue's unfurling, momentum takes over after that impetus. "This 'bow and arrow' mechanism decouples muscle contraction temporally from tongue launch and thereby allows kinetic energy to be imparted to the tongue at a rate far exceeding that possible via direct muscle contraction," the team writes. That also explains why the chameleons' tongue recoil speed, which depends on muscle contraction, was much slower when the temperature dropped, slowing between 42 and 63 percent. According to the study authors, such a flexible feature helps chameleons thrive in a variety of environments.

There are more than 100 different chameleon species on Earth, some of which inhabit locations where temperatures climb above 39 degrees Celsius [102.2 F] or dip below freezing [Scientific American]

. Since these creatures all eat in a similarly sly manner, Anderson says his study's findings should apply across the board, to chameleons living in the desert and those residing in rather frostier locales. Salamanders and toads, too, have ballistic tongues that may be similarly resistant to fluctuating temperature. Related Content: DISCOVER: How Animals Suck: 9 Creatures That Slurp Creatively (photo gallery) 80beats: Madagascar Chameleon Makes the Most of a 4-Month Life 80beats: How All-Female Lizards Keep Their Genes Fresh Without Sex 80beats: Extinct Goat Tried Out Reptilian, Cold-Blooded Living (It Didn't Work)Images: Christopher V. Anderson