The Caribbean is a Hurricane Trampoline Right Now

Although the northeastern Pacific just got its first hurricane of the year--Cosme--we haven't yet had a named storm in the Atlantic in July. Clearly, then, this doesn't seem likely to be a repeat of the 2005 hurricane season, when we had two extremely intense July hurricanes (Dennis and Emily). Jeff Masters, who's always reliable, puts the chance of a named storm during the remainder of this month at about 50 percent. But, the tropical cyclone heat potential in the Caribbean remains very high, and indeed, higher than 2005 levels at a comparable time of year. Check out the image below, courtesy ofHouston Chronicle science writer and blogger Eric Berger (who I'll be seeing in Houston tomorrow): 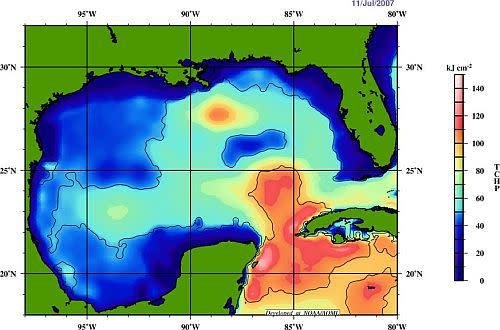 Any storm that runs over these patches of orange and red could be a real nightmare. As Berger adds:

It's worth noting that heat potential generally should only increase during the next few months unless a major storm passes through and stirs up cooler water from below. So what does this tell us? I'm certainly not saying there's another Rita or Katrina in store for this summer. But given the heat potential in the Gulf it's possible, and coastal residents ought to be quite wary of tropical systems that develop in the Caribbean or reach the Gulf of Mexico.

Indeed. The season is just starting, and nobody can tell you where the storms that we do have are going to go--but if they get into the Gulf, watch out.