The Bizarre, Putrid Beauty of the Corpse Flower

Scientists struggle to understand the parasitic behavior of one of the world's largest and smelliest flowers before it disappears. 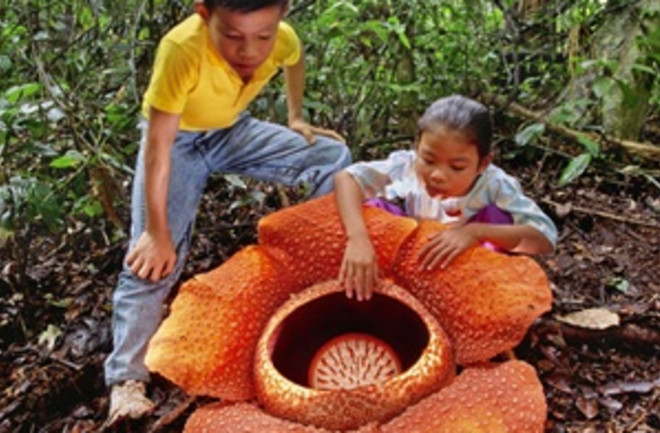 A Rafflesia, one of the world’s largest and smelliest flowers, blooms on Borneo, in Southeast Asia. Frans Lanting, Mint Images/Science Source

On a table in Harvard University’s herbarium, six slimy-looking brownish lobes, each roughly the size of your palm, float in a tub of ethanol solution. They’ve been sliced in half and their flat sides face the ceiling, revealing strange patterns of grooves, bumps and tentacle-like projections. If you had to guess, you might say they were sections of something that grew in the deep ocean.

In fact, they’re pickled flower buds. And though their drab hues and soggy miens suggest otherwise, they’d have bloomed, if left in their rainforest homes, into some of nature’s largest, weirdest and worst-smelling flowers. The plants, which graduate student Lachezar Nikolov collected in the jungles of Malaysia and Thailand, belong to the genus Rafflesia. Their bright red and yellow flowers can grow up to 3 feet in diameter and weigh more than 15 pounds. But unlike most plants, Rafflesiapossess no leaves, roots or stems. They don’t even practice photosynthesis, the basic method of energy-making common to nearly all plants. Instead they bloom from within another species, stealing nutrients from massive vines that are members of the grapevine family. Rafflesia are enormous parasites.

Add in the fact that they emanate the smell of rotting flesh, and it’s no wonder Rafflesia, known as corpse flowers, have captivated naturalists for more than two centuries. Yet these rare organisms are only just beginning to reveal their secrets. Because Rafflesia are so incredibly unusual, scientists have only recently figured out where they came from — which ancestral plants ultimately morphed into these biological curiosities. “There are so many fundamental questions,” says Nikolov.

But in the lab of Nikolov’s adviser, Charles Davis, provocative facts about Rafflesiaevolution are starting to pile up, and they could prove useful in a range of fields, from the biology of scent to parasitology.

The first time Davis saw a Rafflesia flower blooming in a Malaysian rainforest, he couldn’t believe it was real. It was a sweltering day in northern Borneo in 1995 and Davis, then an undergraduate, was collecting plants at the foot of Mount Kinabalu. He’d been studying plant diversity, and this flower, curiously emerging from a twisted thicket of vines, seemed to defy all rules. Davis was transfixed. “It was warty like a toad, smelled like a dead animal, felt wet like a sponge,” he recalls. “It was just so totally strange and otherworldly to me.”

Davis was hardly the first to succumb to the lure of the corpse flower (not to be confused with Amorphophallus titanum, which has a giant phallic protrusion and also happens to smell like rancid meat and bear the nickname corpse flower). In 1818, naval surgeon and naturalist Joseph Arnold, one of the first Europeans to collect a Rafflesia, called it “the greatest prodigy of the vegetable world.”

The mystery of this bizarre flower only deepened over the decades that followed, as a succession of biologists was drawn to it but unable to classify it, or the dozen or so other species of the family Rafflesiaceae they discovered in the forests of Southeast Asia, all lurid and stinking of decay.

Davis returned to his undergraduate studies, but he never forgot the flower he’d seen. A decade later, as a postdoctoral researcher, he was working on a multi-university collaboration called the Tree of Life, to piece together the phylogeny — that branching tree of evolutionary history — for all flowering plants.

The puzzle, known as “Darwin’s abominable mystery,” was to figure out how a quarter-million-plus species of flowering plants came, in a very short span of evolutionary time, to dominate the Earth.

A fly, and pollinator, is attracted to the mottled flesh tones and rancid smell of a Rafflesia flower. Lachezar Nikolov

Davis’ section of the puzzle was a large order of around 20,000 plants called Malpighiales, which first appeared more than a hundred million years ago and quickly diversified to include a large percentage of the planet’s tropical forest diversity.

In 2004, a group of researchers made an important discovery as they compared the genetic makeup and mitochondrial DNA (one of three types of DNA in plants, but the one that researchers had tended to ignore because it evolves relatively slowly) of Rafflesiaceae species to known Malpighiales: It turns out that the Rafflesiaceae family is part of Malpighiales. Up until then, it had been anyone’s guess where these bizarre parasitic plants came from. Suddenly, the flower that had captivated Davis that steamy day on the island of Borneo was officially part of his funded research agenda. He pounced.

From the DNA, Davis teased out more details on the plant’s origins. He discovered that Rafflesia evolved from plants with some of the world’s smallest flowers, whose blossom size ballooned nearly eightyfold over 46 million years. For scale, if a common white Shasta daisy grew 80 times bigger, its petals would stretch the length of a shipping container. “It makes the plants that much more mysterious,” says Davis. “What drove the evolution of these ginormous flowers?”