The Biology of . . . Cryogenics

Wood frogs survive long periods in a deep freeze. Can people do the same? 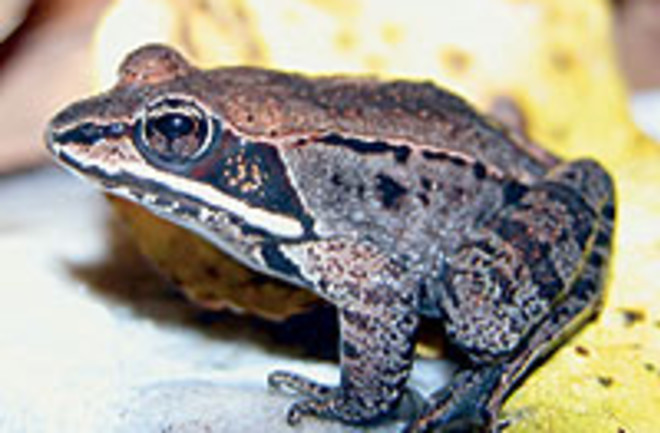 As wood frogs freeze, they draw in their legs and tuck their digits under their body. This position helps keep them from drying out over the winter. | Courtesy of J. M. Storey/Carleton University

Sign up for our email newsletter for the latest science news
Courtesy of J. M. Storey/Carleton University

As far as Ken and Janet Storey are concerned, the most interesting frog is one that doesn’t move or breathe and has no heartbeat or brain activity. In the Storeys’ biochemistry lab at Carleton University in Ottawa, the typical study subject is thrown into an industrial freezer. They call them frogsicles, though they’re partially liquid inside. “Basically, the body turns into a syrupy mass,” Ken Storey says. As far as the frog is concerned, this is nothing out of the ordinary. Like a handful of other creatures, the common wood frog, Rana sylvatica, is a biological conundrum. It spends its winters interned in subzero sleep, its tissues steel-rigid, and revives in the spring raring to go. It’s the Rip van Winkle of the animal world.

The Storeys have spent more than 20 years identifying the genetic switches and biochemical processes that make this reanimation possible. Their work has been avidly followed by biologists in the field of organ transplantation: If a donor’s heart or kidney could be frozen and stored without damage, physicians could dramatically increase the number of transplants they perform. The fact that a wood frog can nearly come back from the dead has also fanned the futuristic fantasies peddled by commercial cryonics labs, where human corpses are kept on ice in the vain hope that medical science might one day restore them to life.

Warm-blooded animals are designed to stay at a near-constant temperature—98.6 degrees Fahrenheit in the case of humans. When they start to get cold, their metabolism revs up, generating internal heat. Once this system breaks down and the animals freeze solid, the ice tears up their insides: The water in their cells expands as it freezes, shredding membranes and dislodging organelles.

Wood frogs and a few other animals such as box turtles do exactly the opposite. When temperatures drop below freezing, the frog’s metabolism eases to a near halt, so its cells can survive on negligible amounts of oxygen and energy. Meanwhile, the liver begins to pump out glucose, raising concentrations in the bloodstream to more than 50 times those found in a human diabetic. Ice crystallizing in the frog’s body cavities draws some of the water from the cells in the flesh and organs. This further concentrates glucose inside the cells, turning it into an antifreeze that keeps the remaining water from solidifying. (Commercial antifreeze is made of a sugar alcohol similar to glucose, called ethylene glycol.) With the antifreeze in its cells, a frog can remain in a torpid state until spring, when its metabolism whirs back to life. “It goes brain dead for a few months, then has little froggy thoughts again,” Ken says.

This image shows the damage that ice crystals can do. This liver cell, taken from a frozen wood frog, was cooled to –4 degrees F—too cold for glucose to protect it. The cell is less shrunken than a cell frozen to that temperature without cryoprotectant, but it would not be able to survive the thawing process. | Courtesy of Dr. B. Rubinsky/University of California at Berkeley
Electron micrographs of wood frog liver cells reveal how they withstand temperatures well below freezing. This image shows a cell taken from a frog frozen to a temperature of 25 degrees F while alive. Pockets of water (w) remain inside the cell, but high concentrations of glucose keep them from turning to ice under normal winter conditions. | Courtesy of Dr. B. Rubinsky/University of California at Berkeley

The ability of wood frogs to freeze and thaw probably evolved during an ice age about 15,000 years ago, the Storeys say. The cells in the frog’s moist, delicate skin were already optimized to prevent dehydration; glacial conditions just kicked the process up a notch. Ordinarily, high blood-sugar levels trigger a process known as glycation, in which glucose molecules bind to the body’s structural proteins, among other things, causing cellular damage. Not so in wood frogs. The Storeys recently isolated a gene that short-circuits glycation. Other DNA tests have allowed them to identify genes that turn off metabolic processes, control cellular volume during freezing, and limit the damage that oxygen can do to cells when it flows into them again in the spring.

When the Storeys compared the livers of frozen wood frogs to those of control frogs in a normal state, they also found unusually high levels of messenger RNA molecules that code for fibrinogen, a clot-enhancing protein. Once activated by an enzyme in the bloodstream, fragments of fibrinogen bind together into a sturdy lattice, sealing any leaks that have formed in blood vessel walls due to the stress of the freeze-thaw cycle.

Boris Rubinsky, an engineer at the University of California at Berkeley, has worked with a number of scientists to apply the Storeys’ findings to other animals, including humans. In 1999 Rubinsky and his colleagues used a computer-controlled pump to infuse rat livers with a cocktail of cryoprotective chemicals. He froze the livers at 29.3 degrees F for about two hours, then thawed and transplanted them into other rats. Of the nine transplantees, eight survived for several hours after receiving the donor organs, and one survived for five days, suggesting that the livers were at least partially functioning. Since that landmark trial, Rubinsky and researchers at the Sheba Medical Center in Tel Hashomer, Israel, have applied similar freezing techniques to frozen rat hearts. In a 2003 experiment, the hearts remained viable and pumping for more than an hour after being thawed and transplanted.

Cryopreserving organs could one day revolutionize transplantation, but some scientists have their eyes on an even larger prize: freezing entire human bodies. The Alcor Life Extension Foundation in Scottsdale, Arizona, made news in 2002 when it wrangled with some relatives of baseball player Ted Williams. Alcor officials say Williams paid them to freeze his body after he died, but his nephews John and Samuel Williams recently filed suit against the company, alleging it didn’t have proper legal permission to do so. Alcor continues to hold the remains, pending future legal action.

Alcor’s goal, trumpeted on its Web site, is to keep deceased customers “in a state that will be regarded as viable and treatable by future medicine.” Most cryobiologists deride this as a pie-in-the-sky enterprise. “They’re trying to take a thousand steps at once,” Ken Storey says. “The temperatures they’re dealing with are lower than anything in nature, so there’s extensive tissue damage and cell dehydration.” Yet Alcor has never guaranteed that its patients will receive a return on their $150,000 investment. “This is an experiment—it’s speculative science at best,” the company’s CEO, Joe Waynick, says.

Alcor is banking on the proposition, Waynick adds, that “survival of structure means survival of the person.” The company’s scientists are trying to figure out how to cool corpses to temperatures that cause total metabolic arrest—around –321degrees F—with minimal tissue damage, so the bodies can remain perfectly intact for thousands of years. To that end, they infuse clients with a proprietary mixture of carbohydrate-based antifreezes similar to those naturally produced by the frogs in the Storeys’ lab. Waynick thinks some of the first patients who signed up for Alcor preservation in the 1970s and 1980s were too damaged by freezing to be revived, but current techniques are less likely to cause “cracking,” he says. The tissues are pumped so full of cryoprotectant that they never completely solidify. Significant obstacles remain, however, including the toxic effects of antifreeze on tissue and its imperfect dispersal throughout the body. “Different organs absorb the cryoprotectant at varying rates, and some don’t do as well as others,” Waynick says.

To the Storeys, there isn’t that much difference between institutions like Alcor and most organized religions. “The promise of eternal life is something that’s appealing to just about everybody,” Ken Storey says. Still, they don’t entirely dismiss cryobiology’s grander goals. “It’s possible in decades that we might be able to freeze astronauts for long missions and things like that,” Janet Storey says. “But our focus is not how to apply these techniques to humans down the line. We want to figure out how the biological systems work. Other people can take it from there.”