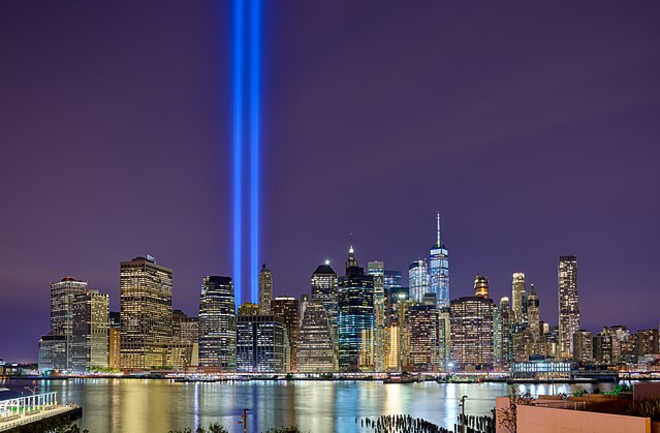 A new study shows that one million birds have been influenced by NYC's annual "Tribute in Light," which memorializes 9/11 victims. Scientists say the study shows the larger impact of light pollution. (Image by Abc36/Wikimedia Commons) For one night every year, 88 Manhattan searchlights beam two columns of light toward the heavens. These “phantom towers,” known as the Tribute in Light, are an annual reminder of the thousands who died in the 2001 terrorist attacks. But these ethereal lights are also a beacon for migrating birds. Like bugs to a streetlight, they’re drawn in from far off paths. The birds — warblers and cuckoos and scarlet tanagers and Baltimore orioles and many more — circle endlessly, expending much needed energy, until they break free of the trance. Sometimes, they die. And in a study published Wednesday in the Proceedings of the National Academy of Sciences, researchers have put a number on the impact. The ornithologists estimate that the Tribute in Light disoriented 1.1 million migrating birds over the seven nights — across seven years — that they conducted their study. But these scientists, who’ve worked with memorial organizers since nearly the beginning, are not calling for the Tribute in Light to be changed in any way. Rather, they’ve used the circumstances as a natural experiment to study how urban light pollution impacts birds. “The unique part of this is that we can see what happens when we shut the lights off,” says lead author Andrew Farnsworth, an ornithologist at Cornell University.

Memorial organizers work with volunteers and ornithologists to keep an eye on bird activity while the lights are on. Once more than 1,000 birds are in the area, they shut it down for 20 minutes while the birds disperse. (Kyle Horton/Cornell University)

Roughly a quarter of Earth’s birds are migratory, and most migrate at night. With the sun down, the birds take advantage of favorable atmospheric conditions, burn less energy and evade predators. They navigate using magnetism and celestial lights. So, back when the memory of the Twin Towers was still fresh in people’s minds, conservationists, ornithologists and organizers worked together to mitigate the impact that this epic light display would have on birds. “There was an explicit set of discussions about how there might be a hazardous situation for birds in a place where nobody wants to see any more death,” Farnsworth says. Their eventual plan called for scientists and volunteers to watch the skies around the memorial each year, tracking what birds were doing. If more than 1,000 birds were disoriented by the beams — or if any were flying dangerously close to buildings — the organizers would turn off the lights for 20 minutes. Counting birds under these circumstances isn’t easy. It’s like birding on steroids. “Envision looking up a flashlight beam when it’s snowing and trying to count individual snowflakes,” Farnsworth says. Volunteers watched birds swarm the memorial from the first time the lights went on. But nothing big happened until 2010. That was the first year post-9/11 where weather conditions in early September pushed large numbers of birds to start their journeys south. “There was a large, large movement of birds early that night,” Farnsworth says. Eventually, thousands circled the beams, diving in and out of the light. Audio recordings show that even the birds’ calls changed as they tried to talk to other birds and reorient themselves. The Tribute in Light turned off a number of times that night. And when it did, the calls stopped and the birds got their bearings back almost immediately. “When that last light turns off, within a minute or two the calling goes to almost nothing,” Farnsworth says. “It’s incredible. It’s a very, very fast response. The birds disperse very quickly from the area and continue on their way. It’s a very dramatic change in behavior between lights on and lights off.”

For decades, a Canadian non-profit called the Fatal Light Awareness Project has tried to reduce bird deaths by convincing building owners to turn off unneeded lights. On one night each year, FLAP gathers thousands of birds from around Toronto's buildings and lays them out. (Alan Li/FLAP)

Then, in 2015, Farnsworth finally had an epiphany of sorts. In his day-to-day research, the ornithologist uses radar and acoustics to study birds. Flocks of birds show up on radar just like planes, rainclouds and other aerial objects. And as Farnsworth stood below the Tribute in Light that year, he glanced at a live radar app on his phone. He realized that the changing pixels were actually swarming birds. And he knew then that technology had advanced enough to quantify what was happening. That night, he texted with one of his co-authors on the paper — then an undergrad — about what he was seeing. The study he developed with his colleagues used ground observations of bird size and calculated the number of birds based on their radar cross sections. “We could look at what was happening in the hundreds of meters around the Tribute in Light,” Farnsworth says.

Scientists used radar to show just how many birds swarm the "Tribute in Light" -- and how the animals disperse when it's switched off. (Courtesy Cornell University. John Barentine is the program manager for the International Dark-Sky Association. His group collects light pollution research and lobbies governments, corporations and home owners to turn take action. He says this study used unique circumstances to back up what scientists have known for years, but struggled to quantify. “In almost every bird species studied, researchers find a clear signal in terms of how exposure to artificial light at night modifies the behavior of birds,” Barentine says. And while the Tribute in Light is uniquely bright, other light sources like sports stadiums and oil rigs are known to disorient migrating birds. Barentine says he’s heard tales of birds circling offshore rigs until they’re too famished to fly and fall to their deaths. “You put light into these spaces at times when their biology doesn't expect light to be there, and it yields behavior that can be a threat to lives of individuals and a threat to entire species over time,” Barentine says.

And the researchers are not stopping at New York City. They’re already tapping into data collected by America’s 140 weather radar stations across 25 years. They can now use those radar sites, paired with light pollution maps, to study migration on a continental scale. “There is obviously light pollution all over the country,” Farnsworth says. “For the first time we can start to understand these behaviors over big scales.” And it’s not just light pollution, they can look at other factors like weather, habitat loss and climate change. Eventually, they hope to tap into radar networks across Europe and Asia as well, collecting a global study of planetary migrations. Beyond the unique natural experiment, the researchers also say the Tribute in Light offers a lesson in addressing the larger problem of light pollution. If conservationists and memorial organizers can work together at such an emotionally charged site, then other cities should be able to find solutions. That’s already been demonstrated elsewhere in New York City as well. Lights out campaigns, where building managers turn out office lights in skyscrapers, have dramatically reduced the number of birds killed. “Turning (lights) off when there’s heavy migration — even for a short period of time — makes a big difference in terms of bird behavior,” Farnsworth says.