The 2007 Atlantic Hurricane Season: Get Ready for 2 or Even 3 More Months

Colorado State's Phil Klotzbach and Bill Gray are out with their next Atlantic seasonal hurricane forecast (PDF), and get this: They're calling for three more Atlantic hurricanes in September, one of them intense (Category 3-5). They're also calling for two more hurricanes in October-November, including yet another intense one. The total forecast (including Felix as a September storm) is for 9 more named storms, five more hurricanes, and two more intense hurricanes. In short, we are hardly in the clear yet. The prediction of a busy October-November, in particular, seems consistent with NOAA's recent release of the latest El Nino/La Nina forecast, which for the first time plainly states: "La Nina conditions are developing across the tropical Pacific" (PDF). La Nina is generally correlated with longer lasting and very active Atlantic hurricane seasons. So batten down the hatches--we have a long, long way to go. And as someone who plans to visit New Orleans this month, let me leave you with a picture that really scares me--the tropical cyclone heat potential in the Gulf of Mexico as of yesterday: 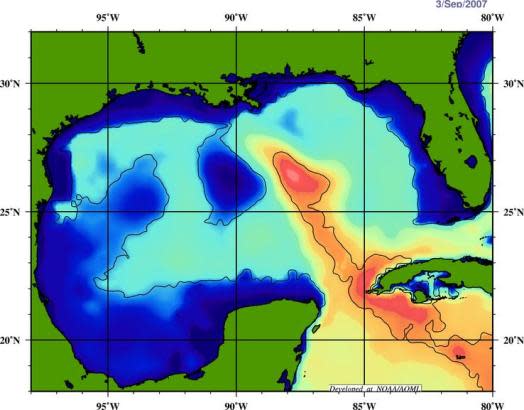