The 1-2 Punch of the End-Cretaceous Extinction 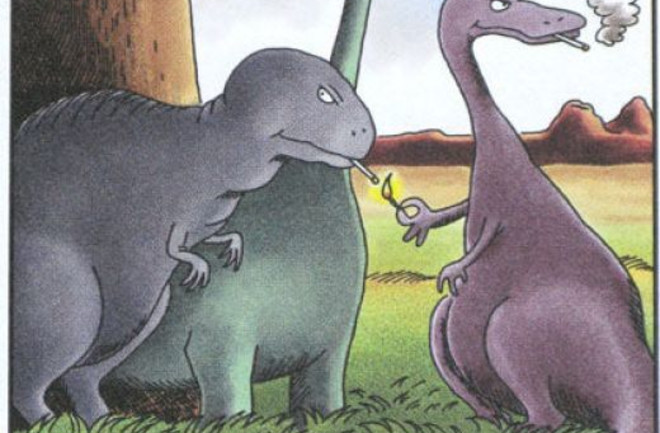 Gary Larson's classic Far Side panel proposes one theory of dino-doom, which so far lacks supporting evidence. New research is, however, shedding light on an alternate idea about what caused the End-Cretaceous extinction. To paraphrase Rob Base and DJ EZ Rock, it takes two to make a thing go horribly, awfully wrong. And so it was with the tag team of terror — asteroid impact and volcanism — that ended the Age of Dinosaurs some 66 million years ago. But new research suggests that prevailing theories may have gotten the story wrong. To recap: the fossil record tells us that 66 million years ago, dinosaurs were living large and in charge. Recent research suggests the diversity of species had been in decline for some time by then, but it's still fair to say the closing days of the Cretaceous period were dino-mite. Mammals were also spreading across the planet and evolving (though back then our ancestors were still pretty much pesky ankle-biters). And then... KABOOM. The End-Cretaceous extinction event. About 75 percent of all species on Earth crossed the Rainbow Bridge. Checked out. Went buh-bye. For the past couple decades, most researchers have subscribed to the theory that a massive asteroid impact set off a chain reaction of stuff so awful not even Dwayne "The Rock" Johnson could have saved you. Earthquakes! Volcanic eruptions! Toxic clouds of gas and particulates shrouding the planet for years! While considered kind of a nutty idea when first proposed in 1980, the sudden impact theory got a boost in 1991 when researchers identified the Chicxulub crater in the Gulf of Mexico. It was the right age and, at more than 100 miles across, had the scale to be a souvenir from an extraterrestrial visitor big enough to cause everything on the planet to have a very bad, no-good day. A lot of media attention has focused in recent months on researchers drilling into the Chicxulub crater to look for more information about the mass extinction — fellow Discoverer Eric Betz even got to join the team and wrote up a fascinating Field Notes about the experience. But what if the Chicxulub space rock was just the final blow to ecosystems already crippled by a threat from within?

Some researchers have never been cool, or at least completely cool, with the Chicxulub impact theory. They've looked instead to a different scar on the planet, one on the other side of the world. On the Indian subcontinent, the sprawling Deccan Traps are today, thanks to plate tectonics, all that remains of a massive volcanic event. How massive? So glad you asked. It lasted a million years, give or take, and piled up lava about 6,500 feet thick across an area the size of the Pacific Northwest.

Credit: Matilda Luk, Office of Communications, Princeton University The volcanic brou-ha-ha that left us with the Deccan Traps occurred roughly around the End-Cretaceous. While the first, fairly small-scale lava flows at Deccan occurred before the Chicxulub impact, the prevailing school of thought is that it was getting nailed by the space rock that caused the global mass extinction. Some researchers, including Walter Alvarez, half of the father-son team that first proposed the impact theory nearly four decades ago, have suggested that the sheer walloping the planet took from the Chicxulub asteroid was enough to set off the most active and destructive phase of Deccan volcanism, which would have released all those killer fumes and coughed up additional sun-blocking particulates to join those already resulting from the impact event.

But new research published today in Nature Communications suggests that the Deccan Traps, not Chicxulub, may have been the main driver of extinction. And here's their super-sexy evidence:

Shells from four species of mollusc contain new clues about what killed the dinosaurs. Credit: Sierra Petersen. Okay, yes, they're molluscs and a bit of spare change for scale, but stay with me. Antarctica's Seymour Island happens to have a well-preserved fossil record of molluscs that spans the Cretaceous-Paleogene Boundary, beginning at 69 million years ago and going through about 65.5 million years ago. That's key because it covers both the million-year Deccan lavapalooza and the Chicxulub impact. It's a rarity to find a record of life, from so long a span, that's both complete and confidently dated, and the researchers immediately set to destroying it. Kidding. But they did sample several specimens from the period and analyze them using a fancy new method: carbonate clumped isotope paleothermometry. Basically, instead of just determining which isotopes are present, the Carbo-Clump method looks at how the isotopes are distributed. That distribution, the clumping, is important because it's heat-specific, so much so that the shells contain a record of changes in temperature. Researchers found that the humble little molluscs of yesteryear had recorded two significant temperature spikes. The first and larger spike coincides with the beginning of volcanism at Deccan. The second spike, not as significant as the first, matches up with Chicxulub. Of the 24 species present at Seymour Island during the span studied, nearly half of them (10) went extinct before Chicxulub, which suggests their environment was already stressed following the first temperature spike, which was likely caused by the eruptions' release of carbon dioxide. The 14 remaining species went extinct after Chicxulub, but their demise also coincides with the most hellacious phase of the Deccan eruptions (and another massive release of carbon dioxide into the atmosphere). The researchers note that, due to their close proximity in time, it's impossible to say whether the second wave of extinctions was caused by the fallout, so to speak, of the asteroid impact or volcanism. The fact that several species were killed off following the first temperature spike, well before Chicxulub, suggests that the asteroid may not have been the main instigator of mass death at the End-Cretaceous, but merely an accessory to the crime.