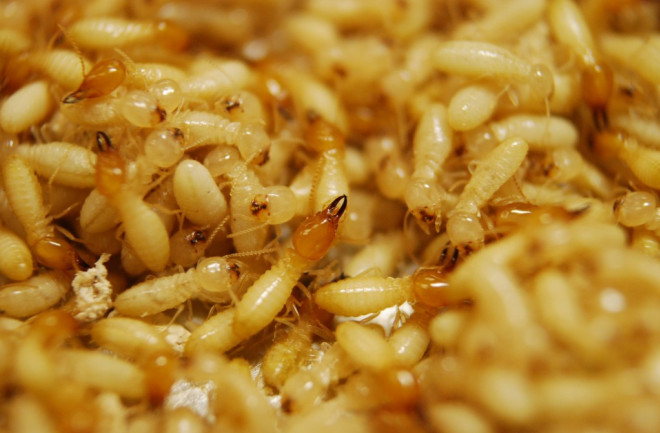 Formosan subterranean termites poo-poo the notion of pesticides. Credit: Thomas Chouvenc, 2013 Termites do that voodoo that they do so well thanks to poo. Worldwide, the destructive insects cause roughly $40 billion a year in damages to homes and other wooden structures. Much of the havoc is wreaked by the Formosan subterranean termite (Coptotermes formosanus) which, researchers have discovered, has some pretty crappy defenses against microbe-based pesticides. According to findings published today in the Proceedings of the Royal Society B, C. formosanus uses its feces as a building material when constructing its nest. The feces promotes a thriving bacterial community which in turn provides the termite with a natural antimicrobial that wards off pathogens — both those found in nature and those introduced to the colony by pesky human exterminators.

C. formosanus lives naturally in a soil environment full of bacteria and other microbes. The termite species has evolved a mutually beneficial relationship with the Actinobacteria family, which feeds off the insects' feces and, in turn, produces antimicrobial chemicals that inhibit the growth of fungi and other organisms that are deadly to the termites. The species lives in large colonies of a million or more individuals, and researchers had previously found that the termites use chewed wood and feces to create a "carton material" in the core of the nest. The material insulates against temperature and humidity changes from surrounding soils. But today's study reveals that the carton material is also fertile feeding ground for Actinobacteria. The researchers isolated a variety of types, but noted that one species, Streptomyces #2338, was particularly prevalent in the five termite colonies studied.

Because some other social insects have symbiotic relationships with Actinobacteria, researchers thought Streptomyces might have antimicrobial properties that benefitted the termites. The team pitted the bacteria against the fungus Metarhizium anisopliae, which is highly virulent to C. formosanus, in a series of both lab and real-world trials. Researchers were particularly interested in learning whether Streptomyces #2338 simply outcompeted M. anisopliae for food, or if the bacteria chemically inhibited growth of the fungus. Their experiments showed that Streptomyces #2338 reduced M. anisopliae growth by 69% over six weeks, and that the bacteria did so chemically, by producing antimicrobial compounds. The study offers grim prospects for eradicating termites with bio-pesticides, since these are often fungus-based. But it's not all bad news: Similar mutually beneficial relationships with Actinobacteria communities have been documented in species of ants, wasps and beetles. Researchers note that many of these insects occupy unique niches in their ecosystems, and the bacteria that has evolved along with them use the insects as a "microniche." This degree of specificity, write the authors, could represent a possible "untapped source for undiscovered antibiotics."