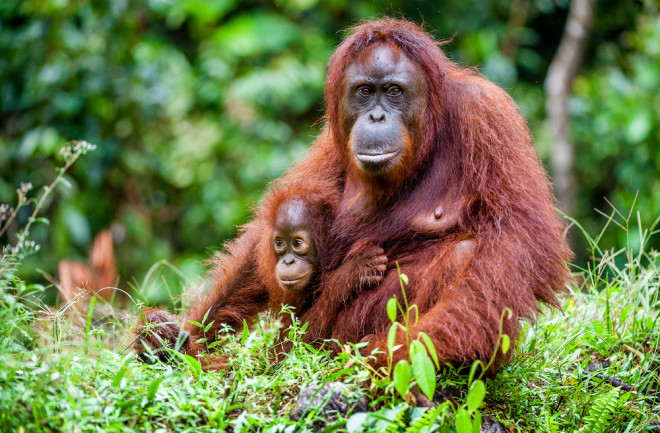 (Credit: Sergey Uryadnikov/Shutterstock)  An orangutan named Rocky is using "wookies" to reveal new insights into the origins of language. In experiments conducted by a researcher at Amsterdam University, Rocky learned and recited a basic vocabulary of sounds, producing vocalizations no orangutan is known to make. By learning to mimic his human instructor, this talkative primate is lending support to one of the leading theories of language evolution.

Adriano Lameira, now a professor in the department of anthropology at Durham University, used food rewards to train Rocky to mimic the sounds a human was making. The sounds, called "wookies", differ from vocalizations naturally produced by orangutans, termed "grumphs." Over time, Rocky got better at producing the wookies, learning to modulate his vocal folds — thin curtains of tissue that vibrate when air is passed over them — and other components of sound production to match the human enunciations. Rocky's abilities prove that primates can manipulate their vocal folds at a fine scale to create distinct sounds, a key component for building up and using a complex vocabulary. [embed]https://www.youtube.com/watch?v=vjkfQJ2bRS0[/embed]

Theories about how protean languages first came to be are widespread, and cover a pretty broad spectrum. Some say that language emerged from instinctive vocalizations that our ancestors uttered when experiencing strong emotions. Others hold that language emerged from the rhythmic "songs" and vocalizations of early hominins. Another theory holds that language is simply a natural progression from gesture-based communication, which is limited by sight lines and darkness. The findings lend credence to the idea that language developed slowly, growing more complex over time. The findings were published Wednesday in Scientific Reports. Wherever language came from, it has two essential components: physical and cognitive capabilities. We need to have both the mental faculties to form and communicate ideas and the bodily structures necessary to produce gestures or sounds. Signing gorillas can communicate via gestures, proving they have the mental abilities to do so exist. Now, Rocky has shown that primates can learn to produce new sounds as well, illustrating that the physical underpinnings of language go back millions of years.