A new study suggests that the key to a stronger bite for dinosaurs is all in the eyes. 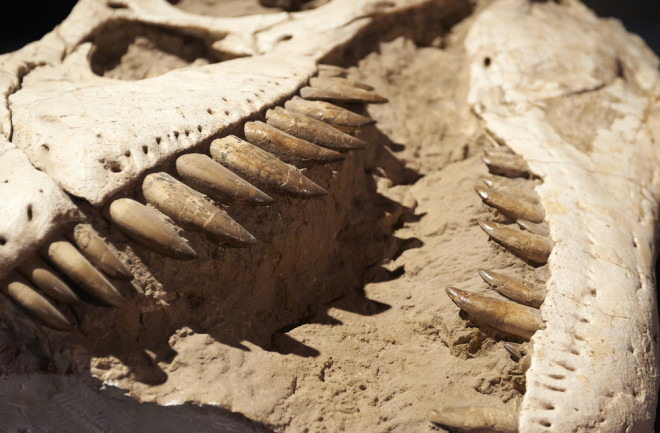 Paleontologists have long looked into the eyes of dinosaur fossils for clues about how these creatures viewed and interacted with their world. For instance, the placement of dinosaur eyes has long been used to determine whether a specific species was more interested in targeting prey or avoiding predators. Furthermore, the size and shape of dinosaur eye sockets has more recently been used to determine species’ ability to see, and therefore remain active, in the dark.

Now, paleontologists have scrutinized dinosaur eyes once again and found something surprising. While most of these creatures had circular eye sockets, large predators such as T. rex had a wider variety of eye shapes, including elliptical, keyhole or figure-of-eight sockets, which would’ve cushioned the impact of their bite as they captured and chewed their prey.

Analyzing the eyes of around 500 fossilized dinosaurs and similar species, one paleontologist noticed a distinct difference in the shapes of the sockets. “Some dinosaurs had eye sockets that were elliptical or keyhole-shaped,” says study author Dr. Stephan Lautenschlager, a lecturer at the University of Birmingham, in a press release. “All of those were large, carnivorous dinosaurs.”

After coming to this conclusion, the paleontologist then turned to computer simulations and stress analyses to assess the function of these dinosaurs’ unusual eyes. All the testing indicated that the skulls that had elliptical, keyhole and figure-of-eight-shaped sockets tended to be less susceptible to stress as they chomped down, allowing them to seize prey forcefully without risking the stability of their skulls.

Moreover, the research revealed that the eyes of these dinosaur predators remained rather small in comparison to their plant-loving counterparts. “In these species, just the upper part of the eye socket was actually occupied by the eyeball,” Lautenschlager says in a press release. "This also led to a relative reduction of eye size compared with skull size.”

In fact, the paleontologist found that the eyeballs of T. rex would’ve been as many as 11 inches across and 44 pounds, rather than the real and much more manageable five inches and four pounds, if their eyes had remained proportional to their skulls. That, of course, would’ve been a sight to behold.