T. rex Ancestor Shared the Lizard King's Smarts, But Not Its Size 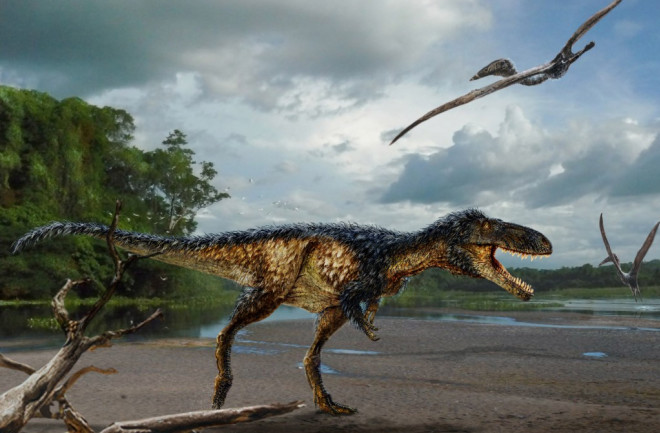 An artist's reconstruction of Timurlengia eutoica. (Credit: Todd Marshall) For a few million years at the end of the Cretaceous period, before dinosaurs went extinct, Tyrannosaurus rex dominated the landscape. The fearsome predator with an oversized head and tiny forearms has become synonymous with the word dinosaur, thanks in no small part to movies such as Jurassic Park. But how T. rex came to rule the roost has remained a bit of a mystery. The earliest tyrannosauroids were about as tall as a human, which is a far cry from the widely recognized 13-foot-tall, 40-foot-long killers that dominate museum entrances today. Now, combing through fossils unearthed in Uzbekistan, paleontologists have discovered a horse-sized cousin to the T. rex that fills a 20-million-year hole in its ancestry.

The new species of tyrannosauroid, Timurlengia euotica, bears striking similarities to its relative, and is the first fossil from a period in the mid-Cretaceous when, researchers believe, T. rex's ancestors started evolving rapidly. The new find was dated to around 90 million years ago, some 10 million years before T. rex appeared. Until now, fossils from that period remained conspicuously absent, leaving open the question of just how the T. rex became the iconic predator that it did. The reign of T. rex may have been fierce, but it was also quite short. Although its ancestors date well back into the Jurassic Period some 150 million years ago, the T. rex, as we know it, existed for only around 2 million years before dying out. It seems that whenever the tyrannosauroids bulked up, it happened fast, within the span of a few million years. Until now, the factors allowing for such explosive growth were largely a mystery.

Tooth of the new tyrannosaur Timurlengia euotica, that was found in the Kyzylkum Desert, Uzbekistan. (Credit: James Di Loreto/Smithsonian)

The discovery of T. euotica provides important insights into the swift rise of the species. One of the bones uncovered by the researchers was a mostly intact braincase, which allowed them to estimate the brain size and function of the dinosaur. After conducting CT scans of the bone, the researchers determined that the new species shared the advanced brain structure and sensory capabilities of the T. rex, despite being much smaller. "We discovered that it had an extremely large inner ear, and particularly, a part called the cochlea, and this is an indication of excellent low frequency hearing," says Hans-Dieter Sues of the National Museum of Natural History, and a co-author of the study. "For a large predator like that, it would be extremely important, because if it cannot see prey moving around, it can still pick up the low frequency sounds of it moving about." It is thought that these features played a key role in tyrannosauroids' ascension to apex predator status, essentially allowing them to outsmart the competition. The team published its findings Monday in the journal Proceedings of the National Academy of Sciences.

"Only after these ancestral tyrannosaurs evolved their clever brains and sharp senses did they grow into the colossal sizes of T. rex," says Steve Brusatte, a University of Edinburgh paleontologist who led the team examining the fossils, in a press release. "Tyrannosaurs had to get smart before they got big.”

Rising to the Top

It wasn't just smarts that helped T. rex rise to the top however. Their dominion of the dinosaur kingdom coincided with the extinction of other large predators, Sues said. With the competition out of the way, the advanced sensory capabilities and large brains of the tyrannosauroids gave them the edge over their prey and likely fueled their dramatic increase in size.

In all, the researchers found the braincase, several vertebrae, teeth, claws and part of a jaw, which was enough to identify the find as a new species. While T. rex was not a direct descendent of the new dinosaur, both species did share a common ancestor and were morphologically similar. In addition, the researchers say that T. euotica likely bears a close resemblance to other tyrannosauroids that existed at the same time it did. As it was millions of years ago, and remains true today, brains and brawn are a deadly combination.