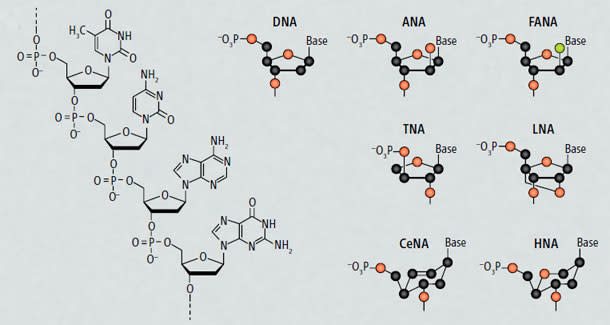 Out of all the possible molecules in the world, just two form the basis of life’s grand variety: DNA and RNA. They alone can store and pass on genetic information. Within their repetitive twists, these polymers encode the stuff of every whale, ant, flower, tree and bacterium. But even though DNA and RNA play these roles exclusively, they’re not the only molecules that can. Vitor Pinheiro from the MRC Laboratory of Molecular Biology has developed six alternative polymers called XNAs that can also store genetic information and evolve through natural selection. None of them are found in nature. They are part of a dawning era of “synthetic genetics”, which expands the chemistry of life in new uncharted directions.

DNA looks like a twisting ladder. Its sides are chains of a sugar called deoxyribose (the D in DNA). Each sugar is attached to one of four ‘bases’ – these form the rungs of the ladder, and are signified by the letters A, C, G and T. RNA is similar, with three important exceptions. It’s typically only half a ladder – a single helix, rather than DNA’s famous double. Its ‘T’ rung is a ‘U’. And its sugar is ribose rather than deoxyribose (hence, the R in RNA). Both of these molecules are called nucleic acids. So are Pinheiro’s XNAs, but they make their ladders using different sugars. If arabinose stands in for deoxyribose, you get ANA instead of DNA. If cyclohexane plays the part, you get CeNA. If the role goes to threose, you get TNA, and so on. These differences aside, all the XNAs use the same bases. Any of them could pair up with a complementary strand of DNA or RNA. “They are very interesting with respect to the origin of life,” says Jack Szostak

, a Harvard biologist who studies life’s beginnings and was not involved in the study. “In principle, many different polymers could serve the roles of RNA and DNA in living organisms. Why then does modern biology use only RNA and DNA?” Most biologists now think that RNA preceded DNA as life’s chief information molecule. Phil Holliger,

who led the new study, says that the “inescapable conclusion” is that its dominance was the result of a “frozen accident at the origin of life”. RNA may have gained supremacy because of random factors rather than some inherent quality, just as VHS and Blu-Rays eventually won out over Betmax and HD-DVDs. The alternative is that some nucleic acids may be better at copying themselves, or speeding up other chemical reactions. “Phil's work will certainly make it possible to compare the functional abilities of a wide range of synthetic nucleic acids,” says Szostak.

Pinheiro created his XNAs by tweaking a natural enzyme called DNA polymerase, which copies DNA. It ‘reads’ a piece of DNA, grabs nearby bases, and assembles a matching strand. If you set the polymerase loose upon its own gene, you can get the enzyme to make more copies of itself. Here’s the clever bit. DNA polymerase is normally very fussy about the bases it grabs. It only selects ones with a deoxyribose sugar so that it assembles DNA, rather than any other nucleic acid. But Pinheiro evolved the enzyme so that it prefers to use the building blocks of his XNAs instead. He started with a varied pool of polymerases, all slightly different, and all mixed with their own corresponding gene. He then supplied them with the XNA building blocks. Within these pools of varied enzymes, some were better at building nucleic acids with the weird sugar backbones. By selecting for these unusually efficient polymerases, Pinheiro quickly evolved enzymes that could assemble XNA strands from DNA ones. He also created an enzyme that could do the reverse – convert XNA into DNA. Of course, no natural enzyme can even begin to do this, so the evolution trick didn’t work in this direction. Instead, Pinheiro used a more brute-force approach: he took a different polymerase, randomly mutated it, and looked for versions that could do the XNA-to-DNA conversion. Eventually, he moulded one. Pinheiro ended up with enzymes that could copy information between XNA and DNA, with an accuracy of 95 per cent or more. With more work, it should be possible to cut DNA out of the loop altogether, so that XNAs can be directly built from XNAs. If this is possible, Szostak adds, “In the longer run, it may be possible to design and build new forms of life that are based on one or more of these non-natural genetic polymers.” There are already hints of this. The team has so far managed to copy FANA and FANA, CeNA from CeNA, and even HNA from CeNA. However, all these steps were far less efficient than working through DNA. But Holliger says that there would be few benefits to abandoning the middle-man, because “it’s convenient to go through DNA.” That’s because all of our genetic technology is geared to our standard nucleic acids. If we moved towards XNA-only experiments, we would also have to tweak our sequencing tools and cloning techniques to match.

The XNAs have important differences to their more familiar cousins. “We haven’t gone very far from standard DNA chemistry, but the XNAs already have strikingly different properties,” says Holliger. For a start, they are extremely tough. In the natural world, DNA and RNA are beset by many dangers. Acids with break some of their rungs, and many enzymes will easily cut their backbones. But XNAs have no such problem. Their unnatural nature makes them invulnerable to enzymes, extreme pH values, and other harsh conditions. “They’re really tough as nails. We’ve thrown the whole New England Biolabs catalogue at them,” says Holliger, referring to a massive directory of chemical reagents. These properties mean that the XNAs are well-suited for certain applications. For decades, scientists have created short strands of DNA or RNA called aptamers

, which are designed to stick to specific targets. They could act as sensors that reveal the presence of a specific molecule, or deliver drugs to diseased cells by latching onto telltale proteins. Their uses are legion, but they are fragile tools. If aptamers were built from XNAs (and more on this later), they would be tougher. However, they would still retain their key feature: they could evolve to recognise different targets. Just like RNA, many of the XNAs fold up into complicated three-dimensional structures. Alex Taylor used this property to create HNA aptamers (H is for anhydrohexitol) that recognise a protein and an RNA shape, by repeatedly selecting for the ones that form the closest fit.

This new study is just one of many attempts to expand the palette of molecules that carry genetic information. Every part of the ladder is up for alterations, from the bases to the sugars. For example, Steve Benner

from the Foundation for Applied Molecular Evolution, has created a polymer that adds two new bases

– Z and P – to the existing quartet of A, G, C and T. “It allows higher information density,” he says. “This is just the beginning,” says Holliger. “We’re going to try and get to ever more divergent chemistry.” Of course, any talk of unnatural chemicals, especially hard-to-destroy ones, is bound to spark a discussion about risks. Indeed, in a related editorial, Gerald Joyce

from the Scripps Institute says that while biologists are starting to “frolic on the worlds of alternative genetics”, they “must not tread into areas that have the potential to harm our biology.” George Church

from Harvard University says that before assessing the technology’s benefits and risks, we’ll have to see examples of what it can achieve that “cannot be achieved using DNA or RNA”. He says, “The risk could go up by increasing the survivability of XNA relative to [DNA or RNA]. That might lead to a full replacement of natural nucleic acids with these artificial ones. But Benner that the XNAs would actually “mitigate the risks associated with biotechnology”. Many of the worries about genetic modification revolve around altered genes going feral, and running amok through wild populations. But XNAs shouldn’t be able to do that. In a world ruled by DNA and RNA, XNAs would be invisible. They would sit behind a genetic firewall, unable to exchange genetic information with living things. Such molecules, far from being an unnatural danger, might actually be the ultimate biosafety tool