Moving robots are becoming more and more advanced, from Honda's astronaut-like Asimo to the dancing Robo Sapien, a perennial favourite of Christmas stockings. But these advances are still fairly superficial. Most robots still move using pre-defined programmes and making a single robot switch between very different movements, such as walking or swimming, is very difficult. Each movement type would require significant programming effort. 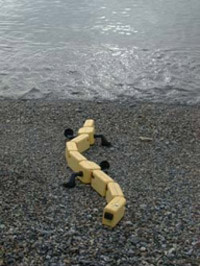 Robotics engineers are now looking to nature for inspiration. Animals, of course, are capable of a multitude of different styles of movement. They have been smoothly switching from swimming to walking for hundreds of millions of years, when our distant ancestors first invaded the land from the sea.

This ancient pioneer probably looked a fair bit like the salamanders of today's rivers and ponds. On the land, modern salamanders walk by stepping forward with diagonally opposite pairs of legs, while its body sways about its hips and shoulders. In the water, they use a different tactic. Their limbs fold back and they swim by rapidly sending S-like waves down their bodies.

Both of these movements, as in all back-boned animals, are controlled by bundles of neurons called central pattern generators (CPGs). These bundles run down either side of the animal's spine (its body CPG) and in each of its four limbs (its limb CPGs). The CPGs produce rhythmic movements in muscles, by sending them carefully timed pulses of electrical signals. The brain is a casual bystander in this process, stepping in only to tell the CPGs to switch from a walking to a swimming rhythm, or vice versa.

By directly stimulating the brains of salamanders, Jean-Marie Cabelguen from the University of Bordeaux, managed to trigger the switch between walking and swimming gaits. With low levels of stimulation, the hapless animal made walking movements, and at higher levels, it tried to swim.

Calguen, along with Auke Ijspeert from the Ecole Polytechnique Federale de Lausanne, came up with a model for how this switch works and tested it by building a robot salamander. The metre-long and grandiosely named Salamandra Robotica was designed to mimic its biological counterpart. Its movements are controlled by an 'spinal cord' that uses electronic CPGs to control its body and limbs. Like a real salamander, these are overseen by signals from the robot's 'brain' - in this case, a wireless human-controlled laptop.

Ijspeert and Calguen used different CPG programs to control the robot's body and limbs. When the robot receives any stimulation from its laptop brain, its body CPG produces the S-like body waves used by swimming salamanders. At low levels of stimulation, the limb CPGs overpower the bodily ones, and the robot walks. But the limb CPGs cannot cope with higher levels of stimulation and switch off, leaving the bodily CPG free to start a swimming motion.

This model was a success. When they tested Salamandra Robotica on the shores of Lake Geneva, Ijspeert and Calguen found that their robot reproduced the same swimming and walking gaits seen in living salamanders, abruptly switching between the two depending on how much stimulation its CPGs received.

The model shows one way in which evolution could have modified an aquatic animal's movements to a walking way of life. This was a key evolutionary step and provided the impetus for the spread of life from sea to land.

Salamandra's success also shows that the studies of robotics and biology can successfully work together. Robots can be used to test biological ideas, while biology in turn can inspire successful solutions to engineering problems. The robot salamander is part of a new era in robotics, where robot movements are controlled by artificial nervous systems.