Surviving the Hunt: Female Elk Get Sneakier With Age 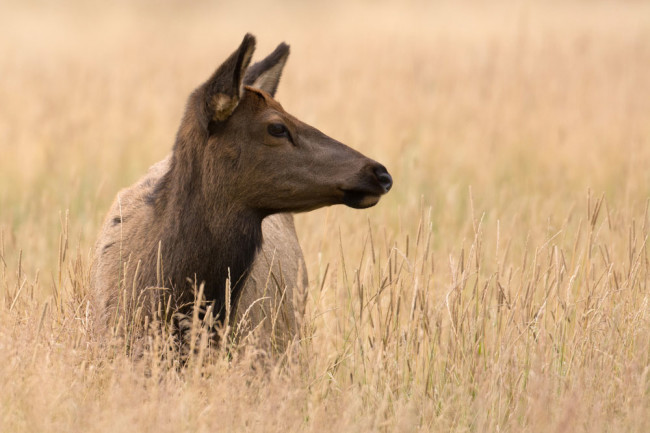 (Credit: Tony Campbell/Shutterstock) Cougars, wolves, and bears (oh my!) all scour the landscape of Western Canada, ready to take out an elk if the opportunity arises. Although each of these predators poses a deadly threat to unsuspecting ungulates, elk have an even bigger problem to deal with: hordes of humans that invade the region every autumn armed with rifles, bows and arrows. But as female elk grow older and wiser, researchers have found, they learn to outwit fervent hunters by changing up their routines and laying low.

Hunters have long been aware that killing an older elk cow is no easy task. “By the time they’re about 10 years old, they’re essentially bullet proof,” says Mark Boyce, a professor of ecology at the University of Alberta. The hunters may be to blame for generating a population of invincible prey; by selectively slaying the females that tend to bolt when threatened, they leave only those that are skilled at hiding to survive. Naturally shy personalities certainly appear to have a major advantage over bolder individuals when it comes to avoiding hunters. But lucky for some, such personality traits normally aren’t etched in stone. Because elk cows live so long—25 years is not uncommon for females, whereas males are lucky to make it to five—Boyce and his colleagues reasoned that they should be capable of learning to exercise greater caution over time, especially if adopting stealthy behaviors means the difference between life and death. When the research team attached GPS collars to wild female elk inhabiting the Canadian provinces of Alberta and British Columbia and tracked their movement over several years, they found that individuals did alter their anti-predator strategies as they aged—evidence that these behaviors could be learned. An elk that took risks such as venturing into an open field in the midst of hunting season when she was young, for instance, would typically become more risk-averse as she advanced in years. That same female would eventually move around her habitat as little as possible to keep a low profile, and would stick to steeper, more rugged landscapes with heavier tree cover when hunters were on the prowl. “They get smarter and they learn that the safer behavior is to move very slowly through thick timber,” says Boyce.

The propensity for female elk to learn may stem from their social way of life. “I think the key here is that these animals live in groups,” says Henrik Thurfjell, a species advisor at the Swedish Species Information Centre and lead author of the study published in PLoS ONE. “With a hunting pressure of five percent or so, after a few years, each individual in even a small group should have encountered some other member of their unit being shot… that’s a very strong incentive to change their behavior.” The old females even appear to behave differently depending on the type of weapon being aimed at them. When being pursued by a bow hunter, they were more likely to traverse the steeper terrain than when threatened with a rifle. The idea is that stalking close enough for a bow hunter to shoot would be challenging on a steep slope, whereas rifle hunters who shoot from a greater distance might actually prefer an incline because it makes their prey more visible—and the elk seem to have figured all that out. The fact that the mature female elk can learn to avoid their hunters in such sophisticated ways is not entirely surprising, says Boyce. “I think if you ask most elk hunters, they’ll tell you that some of those old cows are very smart.” But for Thurfjell, knowing that these animals can adjust their behavior according to a perceived risk could inspire new wildlife management strategies. The elk in Western Canada are voracious eaters and will often devour farmers’ crops. “People have tried to scare them away, but after a while they get adapted to that,” he says, “and you can shoot them all, but then you don’t have them in nature and you miss your conservation goals of having species around.” Thurfjell believes a more effective strategy would involve targeted hunting of single elk while their group members are present, so that the others come to associate a particular location with the risk of being shot. In theory, the surviving animals should learn to avoid that area in the future. “It’s the type of strategy I think could really be developed,” he says.