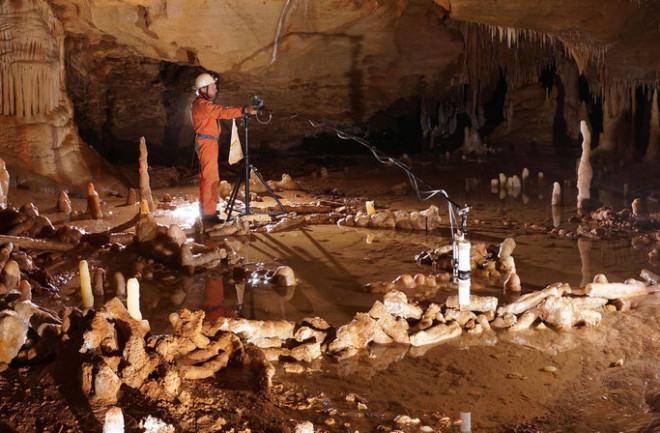 The structures found inside Bruniquel cave in France. (Credit: Etienne FABRE/SSAC) Circular structures discovered in a French cave continue to build the case that Neanderthals were more intelligent than we give them credit for. Deep inside the Bruniquel Cave, researchers discovered two rings of stalactites and stalagmites that appeared to have been deliberately stacked and arranged to form a structure. The site also contained charred animal bones, which may have served as torches to illuminate the dark depths of the cave or keep bears at bay. The thing is, a new dating analysis suggests these structures were built more than 170,000 years ago, long before Homo sapiens arrived in the area. That means Neanderthals were the likely architects, and we didn't expect them to be such adept builders and cave explorers.

New Look at an Old Find

The structures in Bruniquel were first discovered in 1990 and dated at the time to roughly 50,000 years ago based on carbon dating techniques. However, in 2013, Sophie Verheyden of the Royal Belgian Institute of Natural Sciences conducted a new study, drilling into the stalactites and stalagmites to measure differences between layers of rock that accumulated before and after they were felled. Her analysis, published Wednesday in Nature, revealed an astounding age of roughly 176,500 years, more than three times the previous estimate. By contrast, the oldest known human cave art is only around 42,000 years old.

A computer reconstruction of the rings. (Credit: Xavier Muth/Pascal Mora)

As Ed Yong writes in The Atlantic, the new findings all but solidify the theory that these structures were made by Neanderthals, as they were the only human ancestors present in the region at the time, and may force researchers to update their conception of what they were capable of. Evidence of fire, tool use and ritualized activity are evident in the composition and arrangement of the stones, all of which require higher orders of thought often assigned only to modern humans. The structures were found deep inside the cave, far beyond where light penetrates. The builders had to navigate far into the darkness just to reach the structure, so it was likely an important place — it may have been used for some sort of ritual, but researchers can't say that with certainty. Other recent finds indicate Neanderthals were cave painters and buried their dead, which both require higher cognitive abilities. "I think ... we have by now many different lines of evidence to show that Neanderthals, and even Neanderthals 200,000 years ago, had cognitive abilities not so different from our direct ancestors," says Marie Soressi, an archaeologist at Leiden University in the Netherlands, speaking to NPR.