What role might climate change be playing in putting millions of Filipinos at risk? 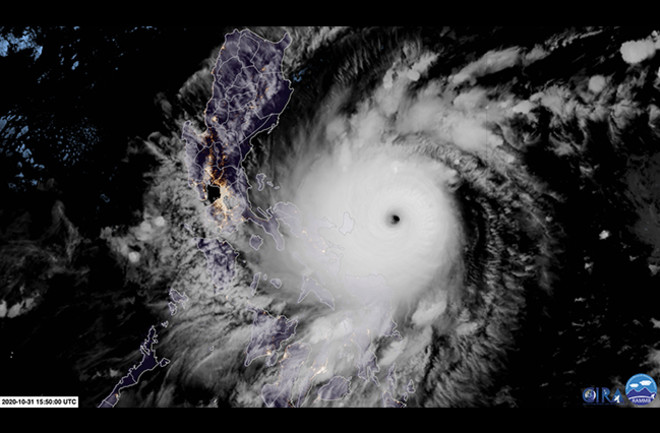 Super Typhoon Goni churns toward the Philippines, as seen in this satellite image acquired on Saturday night, Oct. 31, local time. The bright lights of Manilla are visible just to the west of the storm — Earth's strongest of 2020. (Credit: RAMMB/CIRA)

With a feast of warm water laid out before it, a tropical storm swirling in the Pacific Ocean on Wednesday exploded into a super typhoon packing 180-mile-per-hour winds by Friday.

With that rapid intensification, Super Typhoon Goni became planet Earth's strongest storm of the year. It now threatens to cut a path of destruction across Luzon, the largest island of the Philippines.

This animation of Himawari-8 satellite images of Super Typhoon Goni toggles between two Geocolor views (one with borders added, the other without) and an infrared view. Geocolor imagery approximates the view that we might see from space. (Credit: Imagery from RAMMB/CIRA, animation by Tom Yulsman)

As it approaches landfall, Goni is pushing up gargantuan waves of up to 60 feet. It is expected to come ashore early Sunday morning with winds of about 155 miles per hour, according to the Joint Typhoon Warning Center. That's equivalent to a high-end Category 4 hurricane, indicative of the potential to cause catastrophic damage. (Also by way of comparison, a tornado with 155-mile-per-hour winds would be at the high end of F2 on the Fujita Tornado Damage Scale.)

The storm, dubbed "Rolly" in the separate naming system used in the Philippines, is likely to bring storm surges of up to 10 feet in coastal areas. This surge "may be accompanied by swells and breaking waves [that] can cause life-threatening and damaging coastal inundation," according to the Philippine Atmospheric, Geophysical and Astronomical Services Administration (PAGASA).

After landfall early on Sunday local time, the rugged terrain in the storm's path should sap its strength. Even so, it will still "bring very destructive typhoon-force winds," according to PAGASA. Torrential rainfall, flooding and flash flooding, and landslides are also expected.

The current forecast track has Goni passing over or just to the south of Manila on Sunday evening with winds of about 110 miles per hour. That would be the equivalent of a high-end Category 2 hurricane. That's strong enough to cause extensive damage, including near-total loss of electrical power for days or more.

The Philippines recently suffered through a blow from another tropical cyclone: "Typhoon Molave last week killed 22 people, mostly through drowning in provinces south of Manila, which is also in the projected path of Goni, the 18th tropical storm in the country," according to a dispatch from Reuters.

The region of the Philippines typically experiences 20 tropical cyclones each year, with about eight or nine of them crossing the country, according to PAGASA. The peak season is July through October, when nearly 70 percent of the region's typhoons develop.

A substantial body of scientific evidence indicates that human-caused climate change is contributing to stronger tropical cyclones. Warmer sea surface waters provide more of the energy that cyclones need to form and intensify. With increased warmth, cyclones also can carry more water, which they can dump on land through torrential rains.

Super Typhoon Goni approaches the Philippines in this animation of images acquired by the Himawari-8 satellite. (Credit: RAMMB/CIRA)

Higher heat content beneath the ocean surface also contributes. Normally, a cyclone will churn cold water up from the depths, cooling the surface and thereby moderating the strength of storms over time.

But research published in 2015 showed that in the region where western Pacific typhoons form, the ocean column has warmed by 0.75 degrees Celsius down to a depth of 75 meters (245 feet). With less cool water being pulled up to the surface, typhoons have been unleashed. In fact, for 2005 through 2015, the research showed typhoon intensity in the region was the strongest observed over six decades.

For the Philippines, this is a particularly acute issue, since it is one of the areas of the world most affected by tropical cyclones. As a recent book on disaster science and management puts it, "Ultimately, a discussion of climate injustice must be undertaken because, while the Philippines are vulnerable to typhoons augmented by climate change, the Filipino people bear a disproportionately low responsibility for causing climate change."